Analysing Yourself To Realise Your Talent

What made you, you? How has your decisions formed you, and how will recognising these decisions and their consequences make you stronger? Realising your talent can come from knowing yourself, so that you can better yourself. Here, I show what I realise
Dave Taylor
Blogger
January 13, 2010

In my short life up to now, one of the most important things I have learned is to let other people help me. To trust people, and listen to them, learn from them and grow from them. It is said we learn from past history, and from their mistakes; well don’t forget to learn from others’ good decisions also! Ask someone what decisions or moments in their life they feel make them who they are, and what the best decisions they ever made were. Then, ask yourself. What are the best decisions you made in your life? Don’t ask why you are who you are, but how you and others around you have made you, yourself…

The following are what I feel are the best decisions I have made, and how they moulded me into such a top-notch guy, and how they will make me a rockin’ Games Designer for any company to hire. Some seem meagre, but in reality held valuable lessons for me. So here we go, in no particular order.

My entire young-adult life, I had been a “cool nerd”. I was in with almost everyone in my year at school, dressed well, was funny, had a cool hairstyle, and yet; played video games every single night. I beat the stereotype, although mostly covertly. And yet I was, in my mind, above the basement-dwelling, cloak-wearing stereotype that was the Dungeons & Dragons players. It is only now I realise this is an archaic typecast, and am incredibly glad I allowed myself to enter this realm. 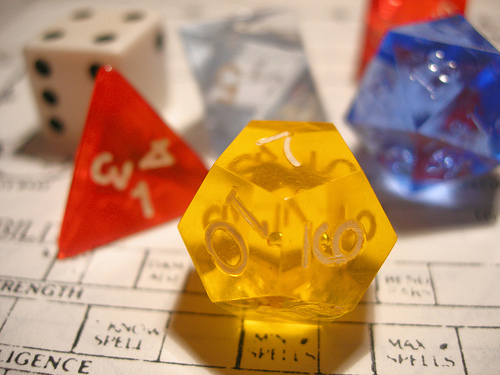 ...Try everything once, it will make you better.

The decision to try out this board game behemoth not only allowed me to realise stereotypes are almost always media-fashioned lies, but has given me some of the best tools for game design I have acquired yet. After about 2 years of acombination of “Exalted” and “D&D”, I have learned an incredible amount about player motivation, player style, in-game behaviour, storytelling… all whilst having a magnificent time with my mates playing a seriously enjoyable game! I thank young me for taking that first step; saying “yes”.

It is no secret that I did not like the school I went to. Still don’t. In fact I think it was the single biggest mountain I ever had to scale in my otherwise hill-y life. It was full of unambitious, unmotivated troglodytes, taught by the education system’s least inspirational, least driven, bag-eyedsuits for teachers. I was also one of those troglodytes, by the way. Then came the biggest moment in my life, by far. The proudest moment of my life, thus far. In a moment of crystal clarity, I lifted my hand from the quicksand, grabbed a vine, and was hauled out at the last moment. After years surrounded by negativity, told I wasn’t going anywhere, reinforced by nearly everyone I knew, I loved that vine. But I only did a tiny amount of the last-minute work to prevent myself from drowning. My family did the pulling.

I wouldn’t be here without them.

Allow anything in tomy life, at first

My music collection is one of my most prized items I own. A CD album collection 300+ strong, from nearly every genre and age of the past 90 years, both seminal and underground. Until exactly 3 and a half years ago, it was quite… particular. Before this moment, I had been notorious as the most (often “overly”) opinionated and ignorant person anyone knew, towards music. I had liked what I liked, and positively loathed so much more. Be it for the image, or from bias, I could completely ignore and slate any piece of music if I didn’t deem it worthy.

It took a single moment of resolve, that my good friend told me to “actually listen to it” (“it” being My Chemical Romance at this time). I did, I listened to him, and listened to it, and it was good. I have since expanded this quality to everything I see and analyse, making my knowledge and repertoire much more genuine. This has been vital in my pursuit to attaining my dreams of games design.

I now have the entire Twiztid back catalogue, and openly praise the work of Paramore and Katy Perry.

One thing I quickly realised in my refreshed journey into academia is that no matter how impressive you make yourself sound, you still have to do the things you said. Telling your peers that you have “just spent 5 hours revising”, after spending 30 minutes skimming a page before distracting yourself for 4 hours, will impress them. It may even fool you. But if you really want to grow, improve and better yourself, do the work now. Without excuses or shortcuts, I found the longer-realised reward is infinitely superior, and more impressive.

The moment I realised this, I was on a much stronger path to realising my dreams.

That CV isn’t going to fill itself

Last semester I finally decided to put the pad down, and start utilising my skills. I began my build of my first game that wasn’t for any coursework or other person. This was just me doing something for me. 5 months in, and I’m more proud of my simple flash game, than any of my A’s from first year university. This is because it represents my desire. One of the best decisions I’ve made since starting university.

Analyse the minute, and the seemingly pointless

This thought process came from my decision to “learn comedy”. I decided I was going to try and learn how and why Monty Python was wonderful, Buster Keaton was perfect, Richard Pryor was a genius. I began by reading into how comedy is written, and considering why the words were chosen, and why in that order, at that pace etc.

After many years of personal study, I thought about what it was I had learned so much about. It seemed so pointless before I started, like I had attempted my own clown college tryouts. But after considering just how much I had learned, and how much it applied to in writing and performance, I now know the importance of studying the tiny, the miniscule, the pointless. It’s what makes worlds real, makes words genuine, makes stories perfect.

Take off those skinny jeans, you look like an idiot

If you haven’t thought about how you and the people around you have shaped your identity and personality, I would strongly advise you to take a moment. Knowing how your decisions have shaped you, will help you grow. Every action has a reaction, without analysing the reaction, leaves an action redundant. If you haven’t learned from it, you won’t improve, and that is all we can do. Strive to improve ourselves, and we will give this industry the powerful and talented future workforce it needs.

(PS My writing this was inspired by the final talk by Randy Pausch in 2007, now featured on TED Talks. Found here: http://www.ted.com/talks/randy_pausch_really_achieving_your_childhood_dreams.html)