When we perceive a game as accessible? are there any factors that foresee its memorability? are these two characteristics at odds? There is a psychological model that try to throw some light on these questions.
Victor Sanchez
Blogger
August 09, 2018

Brain is a pattern matching specialized machine. It was shaped this way by evolution as pattern matching proved quite useful to survival. Some paw prints on the mud reveal the escape route of a prey or alert about the presence of a predator on the surroundings. Knowing that after the snow season comes the rain season followed by the sun season reveal when to seed and when to harvest, etc.

Pattern matching is so useful to us that the brain provide pleasure through chemical rewards any time we make a prediction and it ends being true to try to make us continue making right predictions.

Applying this to the videogame topic it is easy to link the relationship between games having great sales and not risking a lot on innovation. Call of Duty or Fifa players make a series of predictions when buying the game about what they are going to find once the game is running and is pretty usual those guesses turn true.

This is not something exclusive from video games. We can see plenty of this behaviour on films, when we see romantic comedies, on music, with yearly summer hits, or literature when reading the last Dan Brown’s best seller. These are low risk bets where the turnpoints, rhythmic beats or genre topics are telegraphed so loudly that we can make educated guesses that almost always are fulfilled.

So, if we have a successful video game we can repeat the success just creating the same game again and again? Obviously the answer is no.

The chemical reward is only generated by creating or reinforcing matching patterns so, the wilder the guess we got right, the higher the reward, while obvious choices will provide low reward or not reward at all. 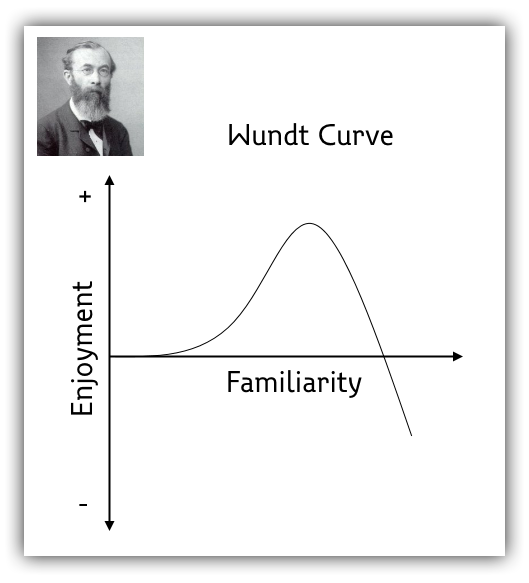 This means that a video game that shares some aspects with an already successful one will produce immediate enjoyment, but we’ll ignore or even reject it soon enough if we fail to see any innovation on it.

One of the characteristics of the Wundt Curve is that it is not defined on time. The curve will have the same behavior independently of the time scale. A product that climbs the curve fast will descent fast and a product that climbs slowly will need a greater amount of time to fall, meaning that this product should be harder to understand and full of unexpected events but also should be more memorable and with the potential to have the more faithful fans.

As we said before, this is not exclusive from video games. We can appreciate this happening when someone tells us about the greatness of the Dogme cinema, on the thrash metal music fans, or the readers of Dostoevsky. All those products has a high entry fee and are equally praised from their consumers.

So, again, if we create a game that drifts away from every other game already done, subverts all the players expectations, and breaks all existing conventions about graphic style, narrative, user interface, etc. Will we be creating the most memorable experience? Probably, but the higher chance is that no one ever will be willing to touch it.

If all the guesses the players make about how the game will be are wrong, they are not receiving any chemical reward, so they will be playing by pure will force, expecting that their efforts will pay up later. With the amount of great games awaiting to be played very few people will be willing to spend time, money and efforts with something that relies on the bare promise that PERHAPS all will worth it at the end.

And here we are with the both ends of the spectrum. At one side the easy to play, no surprises, totally familiar game that will attract players because they know what to expect but will be quickly forgotten at best or kickback the creators, flagging them of “milking the IP” at worst and at the other side that inusual game with weird mechanics that brings a totally new and revolutionary experience to the table, condemned to oblivion as few people is able to understand it an even less are willing to try.

Aristotle said “Virtue is the golden mean between two extremes”. Our golden mean should be to give enough novelty elements to retain the interest but not so many that we overwhelm the players.

Scott Rogers tells on his book “Level Up!” that it seems like a sensible rule to provide 30% of novelty and 70% of known elements. Personally I think this proportion is outdated, even talking about sequels. I'm rooting for a 50/50 as today players are more educated and more aware of different mechanics and styles tried on indie games and also the market quickly adopt every successful mechanic, so it gets burn quicker than a few years ago.