I made 31 games in 31 days. Here I reflect on why I did that, and whether I feel I succeeded at accomplishing what I set out to do.
Victor Breum
Blogger
November 11, 2013 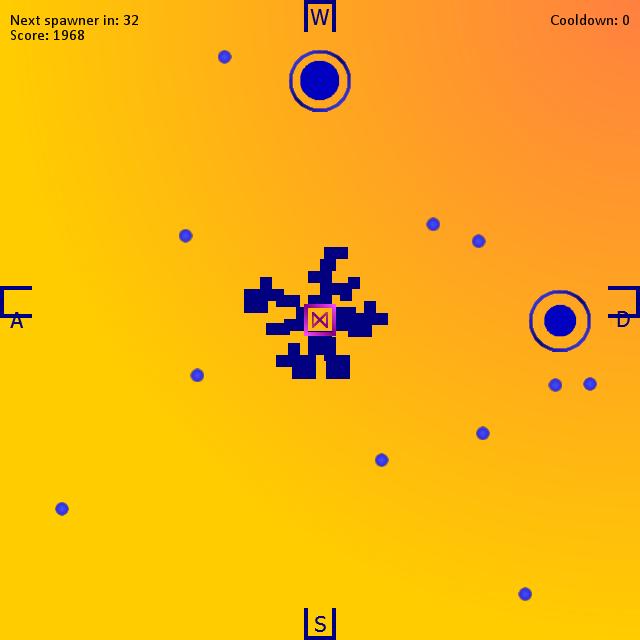 I am very happy about that. I am very proud as well.

They are short, arcadey games with a focus on original, interesting mechanics, that are fun to play with.
They are diverse, ranging from a 2-player action game about launching balls into the opponents wall to saving a penguin from spaghettification.
They were all made in less than 3 hours (most of them in less than 90 minutes).

They are all (except for one) playable in your browser, although games 1-11 don’t work in Firefox.

I uploaded them and wrote about them every day here: http://forums.tigsource.com/index.php?topic=36318.0. Read that if you want to read my thoughts about the specific games, or if you’d rather scroll through a thread with pictures.

I made all of them in Game Maker: Studio, because it’s quick to make small games like these in, and because I was pretty comfortable working with it already.

The biggest of these four motivators was the need for practice. Everywhere you look for guidelines on How To Become A 1337 Super Extra Good Game Developer That Earns All The Moneys, experienced game developers all say the same thing: MAKE GAMES. And I felt that I really did need to make some more games to get better at game making. So I did. 31, to be precise.

However, the question still remains: did I really get any valuable practice out of this? Since what I practiced in October was partly “getting good ideas”, it is hard to measure if I got better. I’d certainly say that the later games got more interesting, and I think that that comes from more interesting ideas. I think I have also managed to change my brain, so that it can easily be set into “game idea mode” and that’s really great. I learned some game design tricks as well, but I don’t know if I’ve learnt more than if I had “just” made a single bigger game in one month.

This project focused on core game mechanics, which I think is a paramount part of every game. This is what everything else is build upon. That does not mean that the other parts (art, sound, story, etc.) are less important, just that without that good, interesting core, the game quickly becomes boring and uninteresting (at least for me). I want to practice other parts of game making later on, but I decided to start with core mechanics.

I’ve wanted to make games for a long time now, and I have made some small ones through the years, but I wanted to see if I would actually like making games if  I worked on them every single day for a month. And I did! Which is awesome! So I’m not stopping.

When I started, I was convinced that it would mostly be other game developers who would be interested in the project, since they would know what it was all about, and maybe someone would want to do something like it. This is why I posted it on tigsource (also because I had no idea as to where else I would post it), and it’s also the reason that I write these reflections, so that other developers might learn from them, and decide if they would want to do something similar.

Finally, I just wanted to make a ton of games, because games are fun! I wanted to make some games that did not waste people’s time despite being made in such short time frames. I figured that the best way to do that would be to be original, and make mechanics that people have not seen or tried before, and would therefore like to explore even though they are not extremely polished.

Something that might have been a reason to do this for some people might be publicity. That was luckily not a goal for me. I say “luckily” because:

Clicks in the 30 days before posting on my blog. Traffic has increased quite a bit since then

Yup, I got around 10 clicks on all the games per day, often less. The spike is from when I posted it on Facebook. 62% of the clicks are from Denmark, which means that they are most likely from me, friends or family. So, not much attention, really, but that doesn’t bother me very much, because I liked the project so much anyway.

I had a lot of fun coming up with and making new ideas every single day, so my motivation was high all throughout. Another source of motivation was that for the first time ever, I had some real interactions with other game development people, and a few liked what I was doing.

Halfway through, I posted the project to Facebook, to share it with my friends and family. That was awesome, since that resulted in people in my everyday life telling me that they had played my games, which is an extremely awesome feeling.

All in all, I am glad that I did this and completed, because I think I learnt from it, I enjoyed it, and it feels great to have games to show.

If you want to try the games, go here (my own blog) and scroll down to the bottom for a nice list.