While it may borrow from FPS, the movie Hardcore Henry has some important lessons for game designers.
Josh Bycer
Blogger
August 29, 2016

Recently, I caught Hardcore Henry, or what could be described as a live-action video game. The movie shown entirely in first-person featured epic shootouts, a burly brawl and things I can't mention without spoilers. One thing's for sure, despite mirroring first-person shooters, there are some lessons for developers to take note of.

Far too often, first person shooters feature main characters with little personality to them. If anything, we may get something from cut-scenes, but for the rest of the time they are dead silent. Henry despite not speaking shows emotion and personality in how he moves and reacts. From simple things like giving an "A-Ok" sign, to tripping while he's running.

There hasn't been a FPS yet where the main character shows personality during play. The closest I've seen was the Doom Marine, but even then there's a problem. The Marine's personality only happens at specific instances throughout the game. The rest of the time, the character is a complete robot. 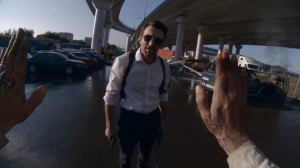 I know why developers do this, because they want the player to feel like they're in control. However, the character must show emotion in order to connect with them.

I would love for a main character to react at different events. The reacting shouldn't be constant, but enough that I remember I'm playing someone.

Next, we turn from our character to what they do.

FPS design has evolved in many ways over the years. I've seen games like Bulletstorm with score-based combat to first-person-fighting in Condemned. The problem is that many FPS designers limit the player in some way. Some examples would be giving the player the ability to cover shoot, but not fight in hand-to-hand, or have an agile character that can't leap over a chest high wall.

In Hardcore Henry, Henry does it all: Fight, shoot, use cover, stealth, use his surroundings and more. The movie moves at a pretty fast pace, with several major set pieces throughout. In each set piece, Henry is rarely just doing one thing. He’s always active and using whatever is around for dealing with the bad guys. 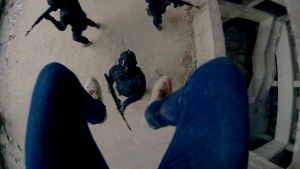 Of course there is an obvious reason why developers don't let the player do everything: That would require a crazy amount of work.

First-person, and by extension skill-base design, requires the designer to define what the player can and can't do. Any new mechanics must be balanced with the basic foundation of the design.

This is all the more so when you are developing a linear game or map.  Most FPS today are designed around a set form of progression. To mix things up, set pieces can have unique situations. What we haven't seen yet is a true open-world FPS: Where the player is not limited by arbitrary conditions or mechanics.

In terms of giving complete freedom of mechanics, Dying Light was the closest lately for FPS design. The problem was the RPG progression's impact on the mechanics; limiting abilities until the player could unlock them.

Finally for this post, something readers on Game-Wisdom should already know.

In my post on storytelling issues, I brought up how boring and static characters are in games.  NPCs should be improved just as the hero. Just because the camera is in first-person doesn't mean that characters can't be engaging.

Watching Hardcore Henry, you can see how the actors can still engage with the audience and control the room; without needing cinematography in the traditional sense.  Jimmy in all his forms is always active and rarely standing in one place talking. 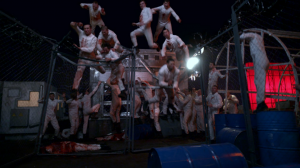 I mentioned this in the post, but Spiderman Shattered Dimension was a good example of what I wanted for games.

All the cutscenes took place in first-person, but Spiderman and the supporting cast were active. Often, trying to show inventive characters personalities is ruined by the player not interacting with them in the gamespace.

Borderlands is a good example of this issue. The game is full of crazy characters with interesting personalities, but all they do is just stand around not doing anything. As we talked about, the cost of animating characters is part of the problem. Just like with the concept of having a true open-world FPS, I would love to see developers figure out a happy medium between static and spastic characters.

The FPS genre seems to evolve in an ebb and flow manner in terms of new mechanics. Most designers stick with "modern FPS design" instead of experimenting or growing. Even though that is the popular option, there are more ways to build FPS than just what we see in Call of Duty.

I think having a focus on singleplayer is what made Doom stood out compared to other shooters. You can obviously do more when balancing a game around one person than multiple. Given how dominate Call of Duty is in the multiplayer space, it would be interesting to see developers try to expand the singleplayer options thanks to Doom.

And while it may be played out at this point, but if more games can use the songs of Queen in their soundtracks, I wouldn't be complaining.