"I Have a Mouth and I Must Clean" - Postmortem.

Hi, I'm Michael. After years of being a passive reader here on Gamasutra I've decided to stop "leeching" and contribute back to the community what little I can :)

This is a repost from my blog: lifeinagraph.shalyt.com. Feel free to visit and geek out with me on some mathematical analysis of games, people and other complex but awesome systems.

During the last weekend of January I've been part of the Global Game Jam 2016 - 48 hours of work, creativity and crunch time. The stated goal is to create a game, learn new stuff and of course meet new people. What makes GGJ even cooler is that it happens simultaneously all around the world - 36000 jamers from 93 countries. As Arnold Nesis put it: "My favorite event of the year is basically  'thousands of people worldwide meet for a 48 hour weekend and... work'."  (really hard).
We made "I Have A Mouth And I Must Clean" (5 cookies if you recognize the reference) - but his friends call him "IHAM". A local multiplayer PVP game about the epic struggle between good and evil - germs Vs. toothbrush, made in Unity (we uploaded the game to Kongregate so everyone can try it out). 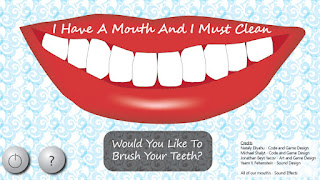