The streaming platform Twitch is looking to cut out the middleman, announcing today that it has its own program in the works to handle both setting up streams and going live on Twitch.
Alissa McAloon
Editor-in-Chief
August 08, 2019

It looks like the streaming platform Twitch is cutting out the middleman and releasing its own software for setting up and hosting streams. Twitch has announced a beta for Twitch Studio, a program that aims to roll all the different aspects of setting up a stream into one, platform-specific application.

Streaming platforms like Twitch can be a useful tool for developers looking to interact with their communities, and Twitch’s new offering takes some of the friction out of those first steps towards live streaming.

Twitch Studio looks to eliminate the need for programs like OBS and Xsplit that handle the more technical side of setting up a stream on platforms like Twitch, and offers a handful of Twitch integrations on top of that.

That being said, Twitch notes that it sees Twitch Studio as a more accessible way for new streamers to get set up, rather than something that will lure experienced streamers away from the programs they already use.

Beyond just basic stream operations, Twitch notes that the program offers guided setup tutorials, a handful of stream layout templates, and a built-in feed for things like messages and alerts that pop up during a broadcast. More features are planned for the months that follow the beta’s launch like an in-game overlay and capture card support. 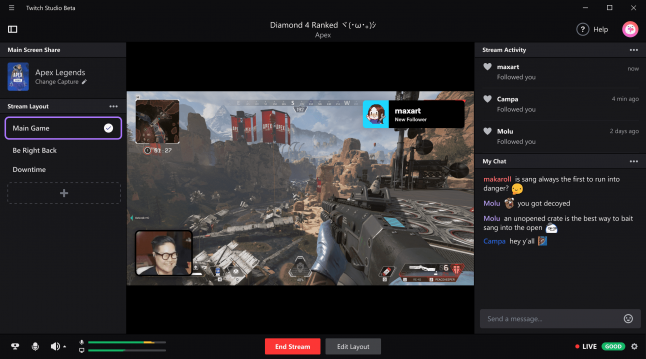