Why you should rethink how your company handles in-house harassment

In Emily Greer's long career in games, which saw her take the helm of game distribution platform Kongregate, she's had a lot of time to think about not just the value of work, but the environment where work is done. At her GDC Summer talk (Greer's slides available here), Greer chose to tackle many of the stories of harassment and abuse we've heard about the game industry of late through the lens of game leadership. At its height, Kongregate's staff topped off at 120 employees, before Greer left to found Double Loop Games.

Though Greer's talk acted as a guidebook for developers looking to build more respectful spaces, developers should take note about one particular point Greer made early in her talk. Right now, most companies in the United States are trained to look at harassment prevention as an exercise of policing individual behavior. But that's a slightly misaligned goal. Individual behavior is moderated through incentive structures, but what happens when the incentive structures for abusing one's coworkers go beyond what's in the company code of conduct?

To illustrate this point, Greer relayed a story from the early days of Kongregate, during a dinner at GDC 2009. While speaking to an executive from a then-rising social game company, the executive's tone drastically shifted mid-conversation.

"His language became suddenly sexual," she explained. "It was 'we don't have to get married, we can make this deal a one-night stand...'" Greer mimed an obscene gesture the exec performed. "I was really taken aback. What was happening here? Does he want me to have sex with him to get a distribution deal?"

As promised, here are the slides from my presentation on how leaders can prevent abuse & harassment.https://t.co/hpf3eNmW6r

Even though Greer knew she hadn't done anything wrong, all the good feelings of the dinner had evaporated in the face of this random executive's garbage comments. But she still couldn't understand why he tanked a potentially lucrative deal. After some reflection, she came to a conclusion about why that executive had spoken that way: harassment is only sometimes about sex, but it's always about power.

Even if that executive had thrown away a profitable deal in the name of a quick rush, Greer opined that it probably felt worth it because of how the power dynamics of the interaction gave that executive a feeling of control. In work hierarchies (like the recently revealed alleged behavior at Ubisoft), this sense of control helps reinforce "the traditional pecking order."

That analysis lines up with data from the Equal Employment Opportunity Commission. The EEOC identified a number of forms that harassment can take in the workplace, that can target race, age, disability, experience, and more. These kinds of harassment are likely to occur at an array of workplaces that feature certain characteristics.

Those characteristics included a homogenous or young workforce, workforces with "high value" employees, workplaces that rely on customer service/satisfaction, all examples that describe game companies to a T. 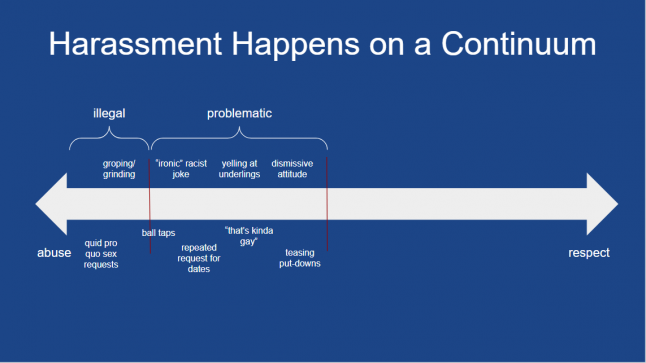 To sum it all up, Greer pointed out that most modern companies, in their anti-harassment policies, are focused on retributive punishment for illegal behavior. But on the pathway to illegal behavior, you get a number of other toxic behaviors like asking coworkers on a date, "ironic" racist jokes, or even just teasing put-downs.

"Companies have been focused for a long time on just eliminating illegal harassment... but to create a safe environment, you have to deal with that whole spectrum, including behaviors that are more subtle," said Greer. "You can't half-ass this. Your culture is defined by what you choose to do when it's inconvenient, not by what you say when it's expected."

By realigning how your workplace thinks about harassment--less about lurking predators and more about how your company promotes and rewards power, you can make your workplace safer and promote the health of your employees. "Because harassment is so much about power, the most underlying factor you can use to create cultures of respect is to minimize the power differential," she pointed out. "Or at least the perceived importance of that power."

That's not an argument for organizations to follow the example of Motion Twin and create flat hierarchies---Greer pointed out that harassment happens in flat organizations too--but that developers do need to think about the separation of people in your organization, what it means, and how it's perceived. Hopefully, before anyone gets hurt.