Where Did "Yotes" Come From?

When I tell someone about Yotes Games or tell them my nickname is Yotes I'm usually asked where it came from. Here is why I chose the name, and why it is so very important to me.
Tony Yotes
Blogger
December 29, 2013 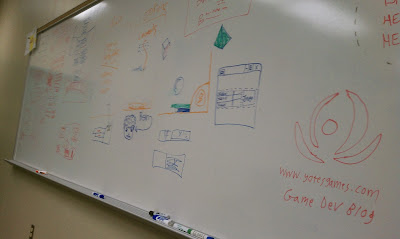 When I tell someone about Yotes Games or tell them my nickname is Yotes I'm usually asked where it came from. Yotes is an unusual word and even more unusual name so it gets people curious. That's exactly why I chose it. It's something no one has ever heard of that's easy to say, write, and recognize. When you first hear it there's nothing in your head correlating to "Yotes" and I want to occupy that space. Here's a look into the origins of the Yotes name.

In middle school I was at a sleepover at a friends house. There was just the three of us, playing smash bros melee all night. At some point I decide to be goofy and hide under the bed making random distracting sounds as my friends played each other one-on-one. Right as the match was about to end I came out from under the bed and yanked the disk out of the Gamecube. The guys flipped and the chase was on. After running around for a  bit I dove back under the bed. They grabbed my legs and started pulling me out while I screamed a mix between "No!", "Yowch", and "Stop!". It was part tongue twist and part mishearing. I continued wailing as they carried me (one had my arms, the other had my legs) out the bedroom and tossed me on the living room couch. That noise was funny enough to make us all temporarily forget why I was being chased in the first place as we laughed for a few minutes.

After that night "Yoootes!" became our inside joke. A few weeks later I decided that it could be used in place of swear words and random verbs. Only the three of us would know what it meant. It became a sort of secret club as we started using it more. We came up with an awkward hand signal to make it official.

A couple years after we started using the hand signal, I felt the need to draw it on paper so we could have a written symbol for notes and funny doodles we drew in class. I was in the middle of walking through a hallway at the time. I don't remember where I was headed or why I was alone, but I turned by backpack around as I walked and dug around for something to write with and write on. My hands emerged with a red coloring pencil and a dirty index card. Too excited about my new idea to care about quality, I quickly drew what I thought the hand signal looked like from the front.

Ever since, we would draw that symbol on everything. I can't count how many times I wished I had a flag for it. Over time I got better at drawing the symbol. I made subtle changes to it but kept the basic shape. I eventually changed from the japan flag style red on white to a red on grey because the gradient seemed so much more appealing. When I had to move away from my friends at the end of 9th grade I still held on to the Yotes joke. It became a precious memory and symbol of my good times in Florida.

After deciding on a game development career in 10th grade (when I had my first programming class) I imagined all the different color combinations I would do for each game when presenting a Yotes logo as the game starts. That's an idea I'm still keeping alive too. When my RPG is coming out, I plan on changing the website's look from Classic Red to Dragon Blue (blue and black instead of red and grey). It was around this time I started getting ideas about forming a team and calling it Yotes Team like Sega's Sonic Team.

Here we are now with Yotes Games, a more general term in case I make games alone. I was moving around a lot and knew I couldn't keep a game development team together if I moved to a new state every year, so I just started doing things on my own. I wanted to be just like Shigeru Miyamoto, an unreplaceable member of a team famous for making iconic characters and a variety of games. I used to daydream about being hired by some big company and being designated the leader of the Yotes Team division, making whatever smash hit I wanted or even playing with the company's IPs. It's fun to dream.

When I was trying to decide a brand name for my games and publishing persona, I knew I wanted another word to go with Yotes. Yotes Games was what I decided on and it fit perfectly. It was a name unique to me and a brilliant canvas to start crafting on. There just happens to be a seldom used shortening of the word "Coyotes" which explains all the hockey games that pop up if you were to Google search "yotes". In the end though, it's my name. I made it myself, it ties to my friends and childhood, it's my imaginary friend/hero/persona I aspire to be, a symbol of how far hard work and passion can take me, and now it's trademarked.

I used Legal Zoom to get the trademarks and they work with Trademarkia to finalize things. If you want trademarks yourself, get a few hundred dollars together and follow these steps. I did it 3 times now and it's simple but time consuming. It would've helped me if I saw that video when I started. I had to jump a round Google and YouTube to make sure I did things right. Hours of videos, forum searches, and blog posts later I spent my hard-earned money to secure my rights to Yotes Games.

I would have named this brand/company/whatever Yotes Team but over time I found help to be unreliable. Even today I still find issues with scheduling, motivation, and different priorities. I seem to be the only person crazy enough to dedicate everything I can to becoming a game developer as quickly as possible no matter the cost or sacrifice. I can't blame anybody though. College is supposed to be about fun and here I am minimizing my free time so I can jump-start a career that might fail.

Yotes has become a very personal thing to me. It's a name for myself. It's five letters stating who I am. Every moment I spent slaving away at a part-time job was building up to this. I didn't spend money on lunches, collectibles, or games I wanted. I saved up for trademarks, hardware, software, and  licenses that will allow me to pursue an indie developer career. I've always promised myself that if someone were to offer me a buyout the two things they could never have are my RPG series and the Yotes Games name. It's everything I worked for. It's my blood, sweat, and tears in a presentable form. The RPG series is what I want to spend my life creating and Yotes Games is simply all I am. These things are my soul and I wouldn't trade myself for anything in the world. The main reason I want money in the first place is to be able to have those two things forever anyway.

Yotes Games is here to stay. Call me whatever, but I think it's my purpose in life. I want to make video games on my own terms and I'm willing to take the journey that makes that a reality.