When Your Best Isn't Good Enough: A Tale of Failure (Part II)

No amount of hard work can shield you from failure - and yet we often only hear about the success stories. A honest and authentic look at the emotional experience of failure, and how it affects your ability to stay creative and thrive.
Peter Cardwell-Gardner
Blogger
June 29, 2015

This is the second of two part series about failure. In part I we analysed how the Cadence (a.k.a. a musical playground of beautiful puzzles) crowdfunding campaign fell short of its mark. In this second part, I’m going to take a deeper look at the emotional impact of enduring failure, and the subtle ways in which it undermines your ability to stay productive and share your creativity with the world.

I remember the lead-up to our Kickstarter campaign (early 2015) as being a time alive with optimism. Not only was I earning some welcome breathing room on a well-paid contract gig, but it felt like doors were finally starting to open for Cadence. In a way, it felt like the Kickstarter was going to be the thing that would break the dam wall and be the beginning of the rest of my life as game developer. Along the way we started to pick up a few award nominations, bolstering the sense we were pointing in the right direction. In short, I was flourishing and things were bright.

I mention this because it’s important to acknowledge how feeling emotionally high enabled a destructive behaviour that paved the road to emotional burnout. Unlike traditional methods of funding, Kickstarter success is cut and dry. Either you get the money, or else everyone very publicly sees you get nothing.  Psychologically speaking, this makes for a very high stakes game. In fact I can remember looking at other failed Kickstarters and thinking: “thank god that isn’t going to happen to us”. But perhaps this sentiment is best described as posturing, because I was still deeply anxious about how things would pan out.

Consequently this made it was very easy for me to slip into a pattern of “let’s work just a little bit harder on this, you know, to make sure”. Of course, if you keep working just a little bit harder here and there, you eventually end up in a situation where you’re horrendously overcommitted, and the only fuel left for the fire is your sleep and physical well-being. As much as I’ve learnt to recognise the symptoms and swore I’d never let it happen again, I was undone by that very simple thought: “imagine how much better life will be afterwards”.

In the same breath, collaborating with a small team of awesome people with a common goal can be a wonderful feeling. In this case we’d camped out in our video guys’ home office for the final days of the lead-up to optimise communication time. The looming deadline for something we cared about created a bold sense of camaraderie and brotherhood – in fact I can remember Rodain, my development partner, saying he’d never felt indie fellowship as fiercely before. But this can seductively encourage you to push even harder, because now you don’t want to let down those around you.

When we eventually, exhaustedly, flicked the switch to go live I was totally shattered. The following hours were a hazy blur that could fit right into a drug-addled Johnny Depp biopic. I can’t remember another time I’ve so desperately wanted to sleep, only to be denied by an adrenaline hangover pushing thoughts around my head. It couldn't help that I knew my silenced phone was simultaneously blowing up with notifications.

24 hours later, a modicum of sleep acquired, the gravity of what happened started to dawn on me. The support from friends and the local community was amazing. But I was caught off guard when some friends and family started making very sizeable contributions to our Kickstarter. My first reaction was a pang of guilt, that people I care about were spending so much on my silly game – but then I realised that actually this was their way of showing me that they really believe in me. Considering game development is so often filled with self doubt and anxiety, this was an overwhelming feeling that brought more than a tear to my eye.

There wasn’t much time to catch my breath however, as I was soon on a plane off to San Francisco for Game Developers Conference (GDC). I was at least smart enough to plan in a few days to recover from jet lag once I arrived (I may have also nabbed an airport-priced massage during my layover that was money gladly spent). I can’t say my rest was peaceful though, as it was rapidly becoming apparent our Kickstarter was losing momentum and the path forward started to look increasingly steeper. My stomach was in double and triple knots.

GDC is a massive conference: thousands of people, parties, events and meeting personal heroes by the minute – more than enough to make your first time completely overwhelming. But conferences are also what you make of them, the reason you spend so much money and travel halfway around the world is because this chaotic environment has the ability to create connections and introduce you to people you might never otherwise have access to. Of course, no one is going to hand this to you – you must be open to possibilities, network like a demon, and always be selling because you never know who is listening.

As a recovered introvert, this is already a tough ask, and I’m always envious of anyone who could shamelessly perform in this manner. But against the backdrop of a flagging Kickstarter, the pressure to create some “magic” was immense. Besides, I’d come too far to not give it my all, so time and again I’d throw myself into the fray and pitch Cadence to people I’d only just met. Ideally in such situations you want to be friendly, energetic, and most of all believe you’re making the other person’s life better by sharing your awesome thing with them.

But instead, being so emotionally depleted, it always felt like I was operating with a very obvious ulterior motive. That I was the noise distracting them from what he or she actually cared about. This felt particularly brutal when that someone was a person I deeply admired and respected. Often I left an interaction feeling like my psyche had been raked over a bed of hot coals. At its worst I remember taking a few minutes to lay spread-eagled on my hostel dorm-room floor, just trying to recapture a little bit of myself.

Even though they didn’t know exactly what I was going through, I was immensely grateful to have friends, both new and old, at GDC. By simply being around and caring about my cause they lifted my mood and I managed to leave GDC having had a good time. But I think this points to one of the most insidious things about feeling unsuccessful: it tends to make you cower, to want to hide yourself – to not see opportunities where before there were none and sabotage your own luck.

The remainder of our Kickstarter campaign was a slow death, but it didn’t take me long to accept the outcome. I was exhausted and simply had no more fight left in me. It seemed far wiser to simply lick our wounds and save our energy for the next scrap. Nevertheless the post mortem was really difficult. I remember people, with the best of intentions, trying to give constructive criticism – but it was almost impossible to hear it without getting very upset. Thankfully, I’m old enough to know when it’s time to go for a walk, but I think here lies another clue.

Clearly, over the hours of hard graft I had invested countless little pieces of myself. This meant that when the campaign failed to meet its goal, it felt like I had failed. Additionally, when people analysed the campaign, it felt like they were picking apart my actions and personally attacking my motivations. But I tried my best to keep the right perspective, to remember the many positives of the campaign and to try and frame the failure as a learning experience.

In the months that followed I noticed another knock-on effect. Do you know any friends who love a particular restaurant but then after a bad experience suddenly it’s the worst? The psychological term for this is ‘splitting’, which acts as a defence mechanism to protect you from unpleasantness by writing it off wholesale.  In this case I found myself trying to get as much psychological distance from the Kickstarter as possible. This isn’t to say I went around trashing Kickstarter as a platform, but it made it very difficult to look at our own page or to back any other Kickstarters.

Alarmingly, this effect spilled over into Cadence as well. I found myself far less enthused about the game, despite all of positive feedback we received during and after the campaign. This points to a crisis of confidence that makes it hard to take those half chances. Competitions don’t seem like they are worth entering anymore. Keeping your followers engaged with regular updates is a chore you can’t manage. Your productivity wavers, and it becomes hard to put your head down and focus on any one task because it’s hard to believe you’re still heading in the right direction.

Lately, I’ve been asking myself a valuable question: did we actually fail? The story of Cadence is a long way from done, so who knows what might happen when we use our hard won experiences to launch on Steam early access or do a full release. This is a curious thing I’m learning about the relationship between success and failure – in the two years I’ve been working on Cadence, my failure rate has gone up significantly. I’ve been rejected and fallen short of expectations more times than I ever did academically or as an employee. But in between, we’ve also had amazing experiences and been presented with opportunities that could only be won by walking this path.

One perfect example happened during that crazy GDC week. One of my hostel dorm mates innocuously mentioned Stugan – a non-profit accelerator for indie developers to work on their game in Swedish country side. And now, four months later, I’m thrilled to be writing this article from a lakeside cabin, one week into my two month long stay. Being surrounded by 22 other indies so far has been an incredible boost to morale. Maybe it was a mistake to try and promote a Kickstarter during GDC? But then again I wouldn’t be here, and right now the view is pretty great! 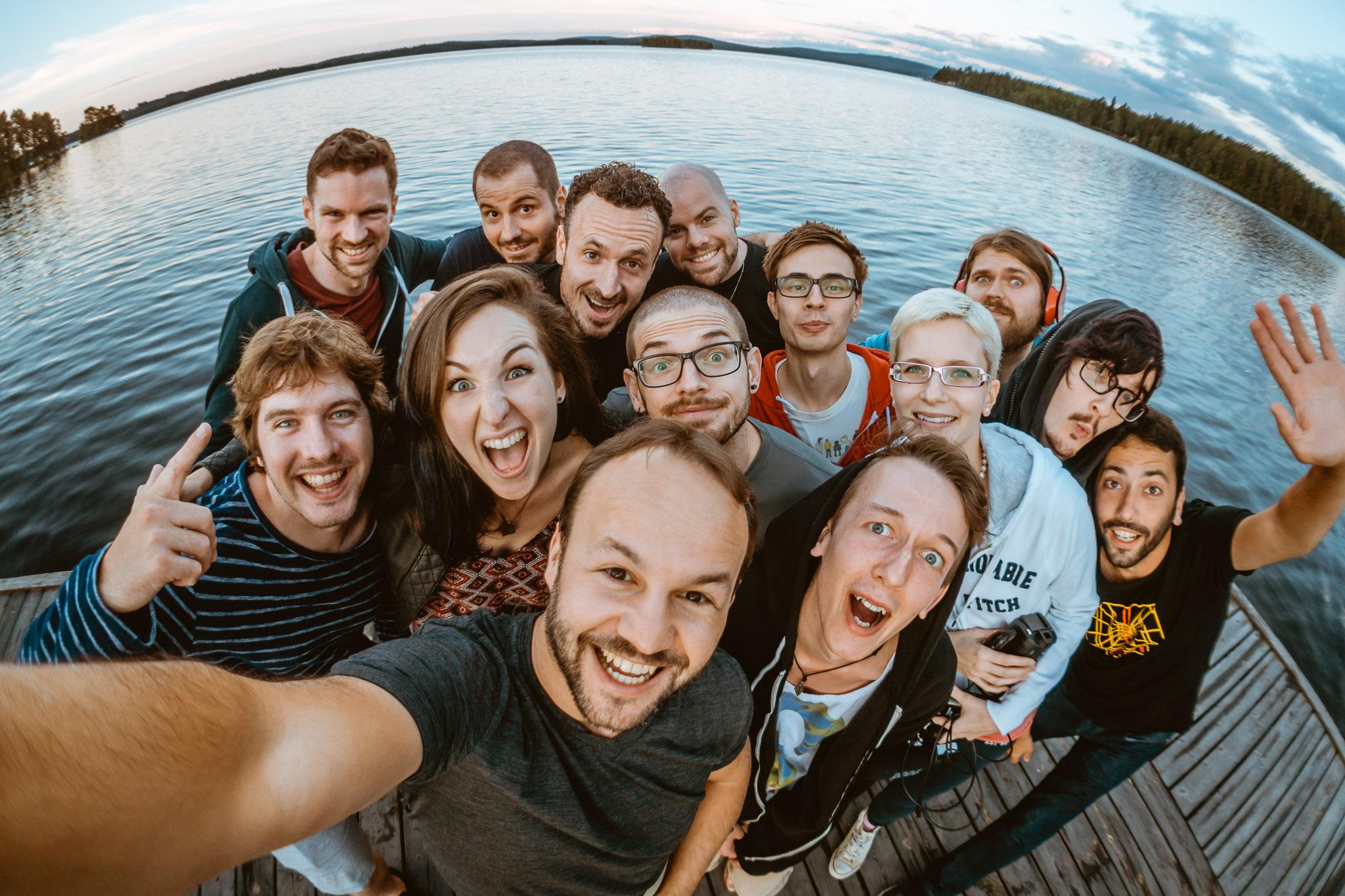 Look out for Cadence on Steam Early Access by the time Stugan ends in mid August.