What's before a kickstarter campaign? Part 1

The first of a series of blog post by Marco Tonetti. A guide through the creative process behind Game Developerz, from the very first thoughts about the game, going through production and company set up, all the way to running a Kickstarter campaign.
Marco Tonetti
Blogger
March 05, 2014

Hey guys! Good to see you, and here we go with my first blog post on Gamasutra. As some of you might know, I'm now running a Kickstarter campaign for my latest game Game Developerz, the games industry card game. In the following days I'll guide you through the creative process behind this project, from my very first thoughts about the game, going through production and company set up, all the way to running a Kickstarter campaign.

I’m Marco Tonetti the creator of Game Developerz and I hope you’ll enjoy my story.

The concept of the game popped to my mind one night at 2.00AM on April 20th 2013, I was lying in bed waiting to fall asleep. I remember it was actually a sad period for me; work was not so great and I was feeling like being an employee was not what I wanted to do in my life, so I was blaming myself over and over again.

However, that was probably my lucky day, and in a snap a game idea completely wiped off any sad thoughts and shined all around the dark room I was in. I immediately grabbed my phone and recorded my thoughts as fast as I could. Usually, when I have a good idea I use to record it, since too many times I’ve lost some good concepts just because I didn’t take note of them; so I’d suggest you to do the same. Good concepts are just like that.. they pass by, but then they go away if you don’t grab them!

A card game set in the computer game development world, "Game Developerz" a funny kidding of all the dynamics and people in a gaming studio as well as all the actors of the games industry in general.

I needed something easy to do, and that did not require a lots of people to create it, was just perfect for me! It was also quite odd, but the entire concept of the game was already there, together with the name of the game and the idea to introduce it to Kickstarter and to share it with the most important people from the games industry! Probably all the months thinking about how to change my life were worth something.. but I was not sure about it yet!

The day after I was already sketching some stuffs on my tablet and writing down the first draft of the Game Design Document. 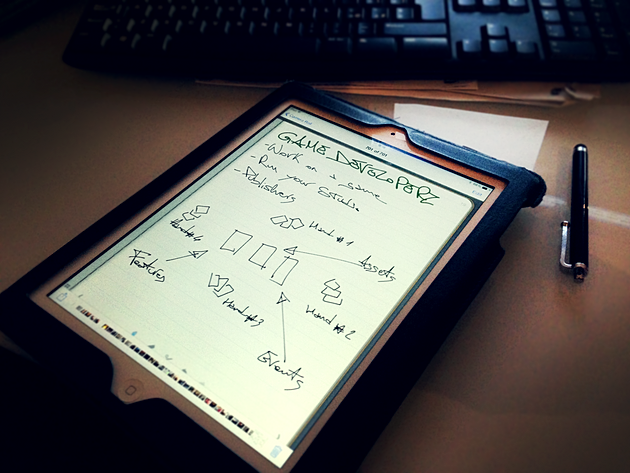 The concept looked awesome to me, so I immediately got in touch with a former co-worker and very talented game designer. I wanted to hear someone else’s opinion about it, and he suddenly fell in love with Game Developerz too!

In the next days, together with a good friend we went deeper into the game design. We were used to brainstorm together, as we spent the past year working shoulder to shoulder, and it all came up quite easily!

We initially set up a Google Doc about all the cards in the game and we started writing down typical anecdotes about games, people and stories from the games industry. We also spent a lot of time crafting the right game mechanics in order to make the game feel like you are really running your studio, dealing with your publisher and releasing your own game. We wanted the game to feel real and we worked very hard on it! Surprisingly, in just three days from concept it was all done and ready for testing.

It has probably been the fastest and the most clear game design I’ve ever been working on, and it was incredible to see how everyone loved it as soon as they heard the concept of a game called Game Developerz, who wanted to have fun about a wonderful industry, that unfortunately takes itself too seriously, even when it's not needed, and forgets about the fun and the magic behind making games.

This was about the very first days of Game Developerz, the game design changed in the next months but we put the right foundations for our project.

This gave us the strength to trust in a dream and define our lives’ goals from that moment on.

I hope you enjoyed the reading.