This year these developers stood out and created some innovative ways to promote their games. Learn how you can use their tricks.
Chris Zukowski
Blogger
December 28, 2017

Email marketing is the number one thing most indies are not doing. I wrote more about it here, but In short, there is no better way to connect 1x1 with your fans and drive more sales of your games than email. If you are trying to get people to play your games, you need to do this.

I hope this best-of blog will inspire you to do more with your list than just sending that one email when your game releases.

This is by far the best implementation of a newsletter I have seen by any developer. The folks at Blue Wizard have totally embraced the most important aspect of email marketing: provide value with every email so that your fans look forward to opening them.

Here is how it works:

Slayaway Camp is 2.99 on the App Store and Google Play, and 16.99 for Xbox One and Playstation. The game is a puzzle game in which you control a 80s-VHS-horror-inspired killer who must slay campers. There are dozens of killers you can play as that you unlock by purchase or through game play. However, if you are subscribed to their “Monthly Murderer Club,” once a month they send you an unlock code that you can enter into the game and you get a free killer. These codes only come through the newsletter. They are not posted to Twitter or Facebook. 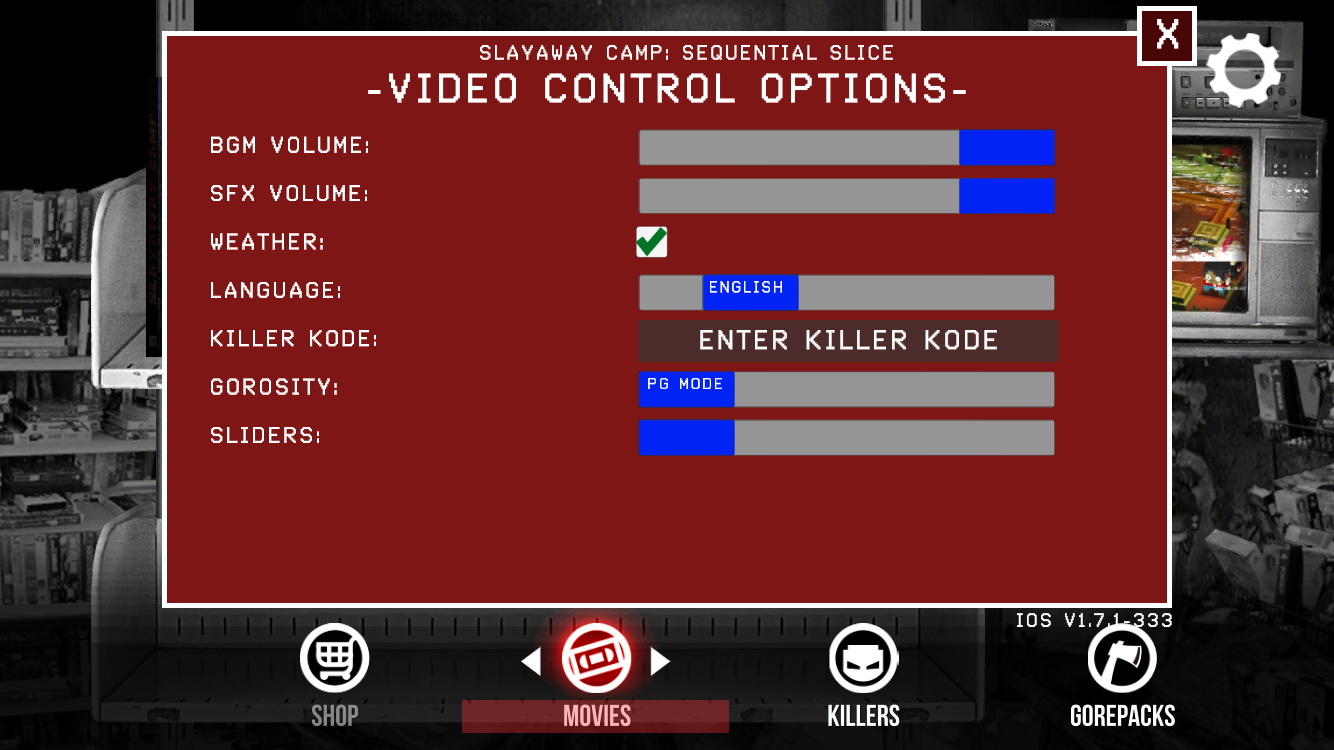 This is the settings page for the mobile version of the game. "Killer Kode" is a field where you enter in the code they send you by email.

This consistent give-away strategy is an example of one of the best thing you can do for your newsletter. Three reasons:

One, fans know that when a new email appears in their inbox from Slayaway camp they are getting something. This boosts the open rate for their emails.

Two, if a recipient stopped playing the game, a monthly reminder with a fresh new bit of content can provide just enough to encourage them get back into the game. This boosts retention.

Three, by integrating the email list features directly into the game, the devs remind non-subscribers about the list every time they play the game. Many devs make the mistake of only putting their signup form on their website. A slim percentage of fans who buy your game actually go to your personal website.

Other smart things the Blue Wizard team does in the newsletter. 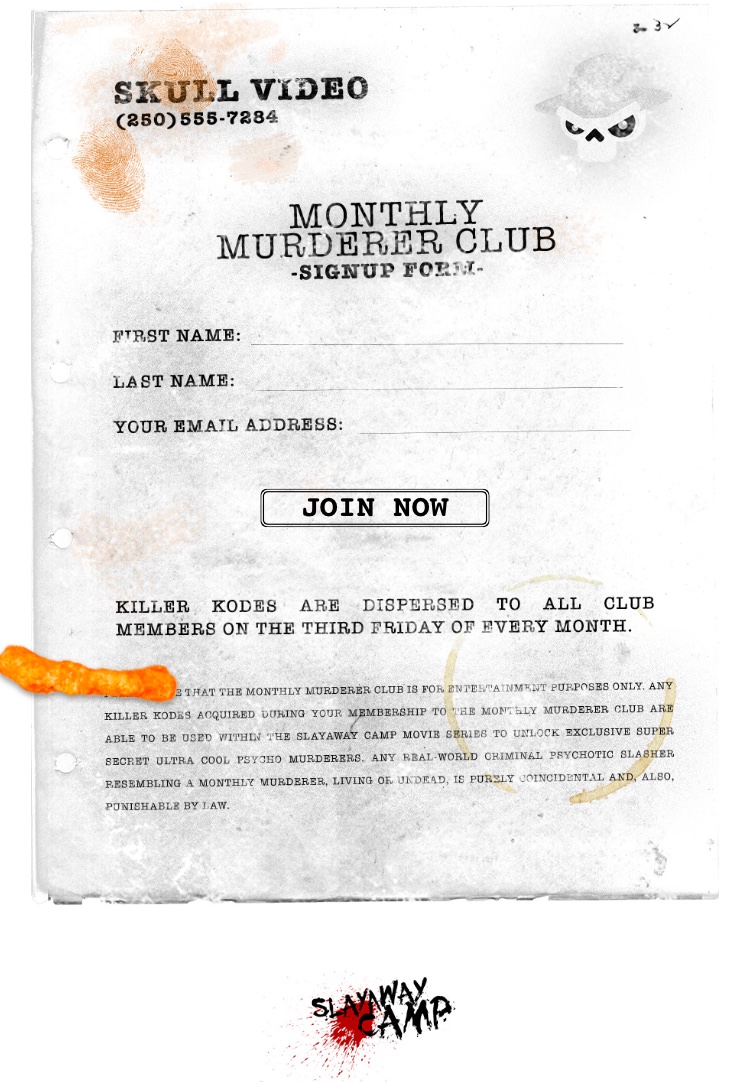 What I like so much about the studio that makes “Unique Experimental Video Games” is that their emails are just as extraordinary bizarre as their games. It is best when your emails have the same tone as your games. Really, just think of them as just a different medium to tell the same story.

For instance, just last month they sent an entire newsletter that was written as a tattoo across the chest of a legless mass of human. 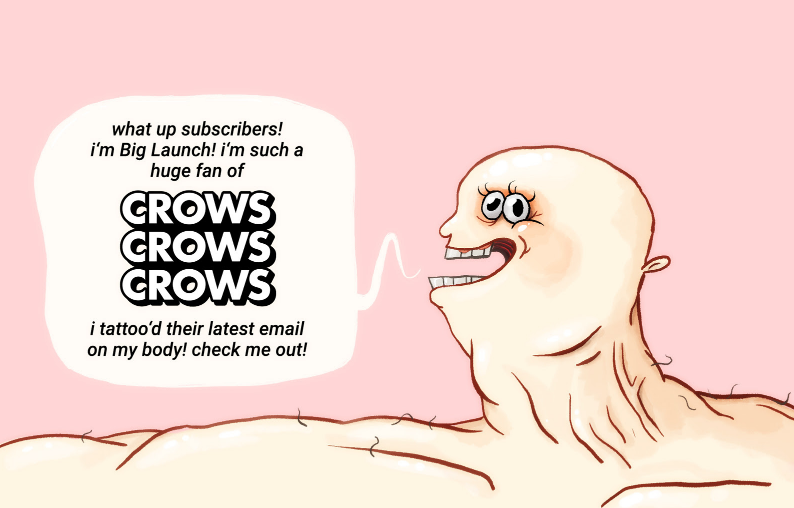 To be honest I don’t think I am cool enough to get what most of these emails are about but you can tell that their newsletter was definitely written by their creative staff. Your mailing lists should not be boring lists of your product releases. The studio founder William Pugh actually wrote an entire essay / rant (?) about how marketing should be done by the creatives at your studio and not the business. It is the right idea and is entirely how you should approach email.

#3 The Asymmetric Gazette - West of Loathing

The phenomenal success of this year’s West of Loathing rests upon its outstanding writing. It is no surprise that the developers also have a great newsletter.

For most of 2017 the newsletter touted what was new in their long running MMO, Kingdom of Loathing, but also gave great progress on the development of West of Loathing.

Here are some specifics I love about the newsletter

Butterscotch Shenanigans has one of the best systems for connecting players to their games through their proprietary Bscotch ID. Because each ID is tied to an email address it doubles as a mailing list. However, Bscotch ID is like a mailing list on steroids. For instance, it allows cross promoting their games by offering unlockables in one game after you accomplished things in another.

They don’t send out emails very often. It is such a shame because they are really good. In general, the emails do a good job of reinforcing their brand by being filled with their unique fondness of onomatopoeia and portmanteau. They even use their unique voice on the traditionally boring email signup forms and confirmation emails. The email theming also maintains their purple and gold brand colors which help readers remember who they are as soon as they open it.

Currently they are using their list to promote their upcoming game (which nobody is quite sure what it is yet) called Scuffle Buddies. Their most recent email was not much more than a GIF of a floating piece of meat. Do I understand it? Not at all. But it does have my curiosity. 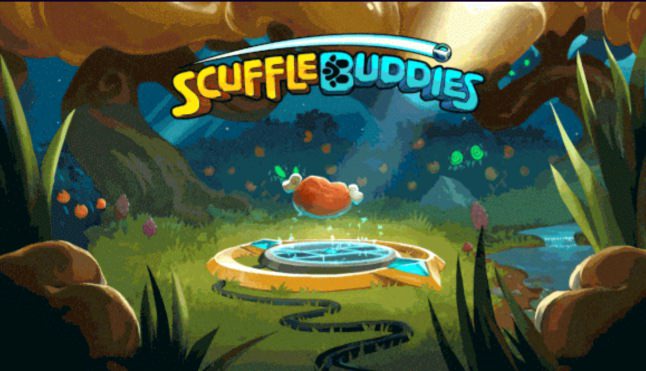 The emails from the developers of Gone Home and this year’s Tacoma make it seems as if they were written not by the developers but by someone running an unofficial fanclub zine. This is a good thing to shoot for when trying to build an audience.

Here are some of these “fan club” things that I have seen.

The uniting aspect of all these newsletters is that they are not just saying “buy my game.” Instead, these emails entertain their fans. They also provide context for the games and they let me know who the people are that are making the games I play.

Are there any good newsletters that I might have missed?

If you still need help with ideas for what to send to your list, I wrote a book with even more details than this essay and an easy to read collection of 87 emails you should send out. Download it for free here. 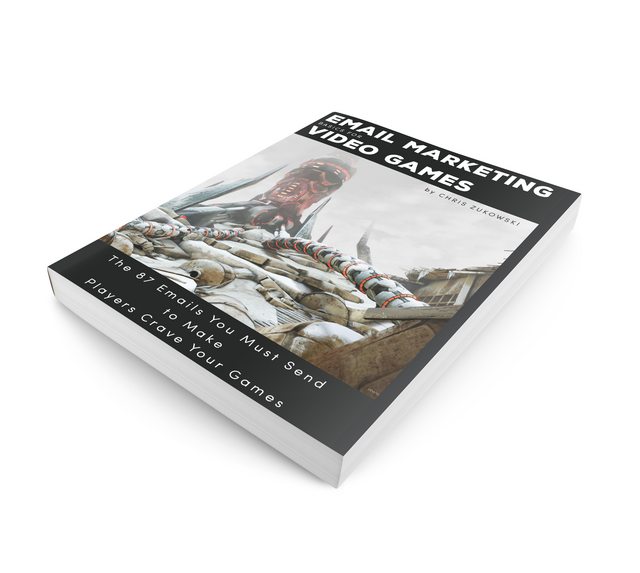