THQ Nordic saw more sales in 3 months than all of 2017, thanks to Koch Media

The Swedish company made more in the last three months than it did in all of 2017, thanks in large part to its recent purchase of Deep Silver (Saint's Row, Dead Island) owner Koch Media.
Alex Wawro
Blogger
May 16, 2018

THQ Nordic's recent acquisition of Deep Silver (Saint's Row, Dead Island) owner Koch Media seems to be paying off, as the company's most recent quarterly earnings report reveals a big spike in both sales and profits.

Notably, that's 439 percent more profit and 673 percent more revenue than the company earned in the same quarter a year prior. In fact, it's almost as much profit (and more revenue) than THQ Nordic made in all of 2017; from January through December 31st of last year, the company reportedly earned 272.6 million SEK (~$31.3 million USD) in profits on 507.5 million SEK (~$58.3 million USD) in revenues.

The lion's share of the increase is chalked up to the company's acquisition and consolidation of Koch Media in February, though THQ Nordic claims that if it excludes the Koch Media deal from its balance sheet it still saw a 64 percent rise in revenues and a 54 percent rise in profits year-over-year.

"Koch Media is by far our largest acquisition to date and confirms our focus on creating value for our shareholders," stated THQ Nordic chief Lars Wingefors in the earnings release. "I’m also happy to inform that Deep Silver will be publishing the upcoming RPG’s Wasteland 3 and Bards Tale IV. Both games are developed by InXile, a California-based studio founded by the industry legend Brian Fargo. Along with them, we are all looking forward to Deep Silver’s next key release, Metro Exodus, now expected in Q1 2019." 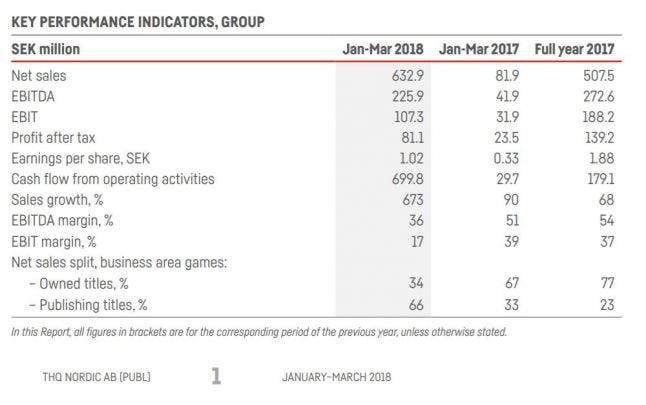