The video game market in Germany grew by 6 percent to â‚¬6.2 billion in 2019 thanks to a rise in online service subscriptions and in-game spending.Â
Chris Kerr
News Editor
April 23, 2020

The video game market in Germany grew by 6 percent to €6.2 billion ($6.7 billion) in 2019 thanks to a rise in online service subscriptions and in-game spending.

According to the German Games Industry Association, known simply as Game, sales of game hardware actually dipped by 2 percent in 2019, but consumers drove overall growth by spending more on services and software.

The chart below, based on data collected by market research and analytics companies GfK and App Annie, breaks down that spending increase, and shows that €3.9 billion ($4.2 billion) of the market's overall €6.2 billion ($6.7 billion) income was generated by in-game purchases, online subscriptions, and software sales ('purchases').

The amount spent on online services alone rose by 31 percent in 2019, showing that German players dropped more cash on subscriptions like Xbox Game Pass and Origin Access as well as online plans for the likes of Xbox Live and PlayStation Plus.

"Up to now, the years at the end of a console generation have been comparatively weaker economically. But we aren’t seeing any of that now. Revenue models like in-game purchases and fees for online services have become important columns for the games market," they explained.

"This means that, alongside the classic purchase of computer and video games, the long-term use of game titles is playing an ever greater role. The dynamic growth shows once again that games are one of the most important drivers of the digital world." 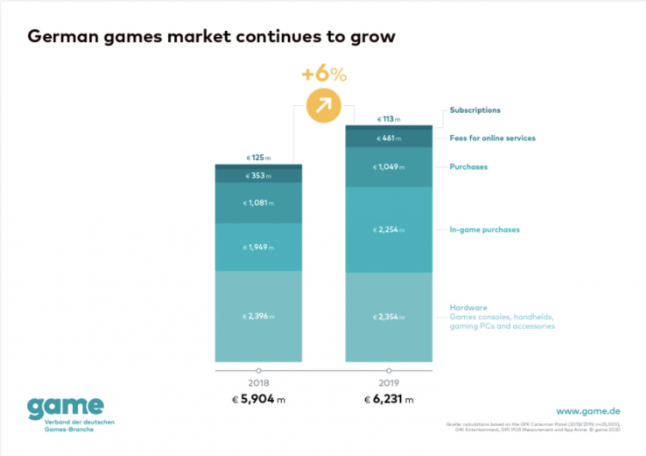