Steam curation: One month in

It’s been a month since Steam’s game discovery systems got a major overhaul. Part of the new Steam marketing backend is a set of tracking data for where your games are shown on the platform. These are the numbers for Desktop Dungeons.
Danny Day
Blogger
October 27, 2014

It’s been a month since Steam’s game discovery systems got a major overhaul, this is the impact that it’s had on Desktop Dungeons. Please note that this is only a single source of data. This post originally appeared on the QCF Design blog.

Desktop Dungeons sales graph, the months pre- and post-curation.
What you’re looking at there is an otherwise reasonably flat and stable long tail from a game that’s nearly a year old. Desktop Dungeons was earning an average of $200 a day before, since the 23rd it’s been earning double that. And no, we haven’t run any promotions or had incredible new press that might explain the hike – traffic on our site hasn’t seen a similar rise, so this is all Steam.

Those sales are the result of increased visibility. Desktop Dungeons is being shown to more people on Steam than it was before. It’s also being shown to people that are more likely to be interested in the game. When Desktop Dungeons launched, 1,015,643 people saw it featured on the front page, 4,196 of them clicked on the image and ended up on the game’s individual page, we can calculate a click-through percentage from that at 0.41% - that’s actually not bad, a web advertising campaign with a rate like that would be good.

This last month Desktop Dungeons’ capsule graphics have been seen by 1,730,564 people resulting in 120,455 visits to the game’s page. That’s an astonishing 6.96% of viewers clicking through to read more about the game! It’s 17 times better than our launch interest, which is when games typically command the most attention. I don’t think I can really state how huge that difference is, and we didn’t have to do anything to get it.

Taking your turn at the firehose

The Steam front page is still the major source of traffic. It supplied just over 700 000 impressions since the 23rd (41% of our total impressions).  52 000 of those people visited the game’s page (43% of our total views) which puts the click-through rate around 7.4%. Part of the changes to Steam mean that more games are getting front page time, but they’re getting that time in front of less people who are more likely to be interested in the games they’re seeing. It seems to be working.

There’s honestly no way that Desktop Dungeons would be on the front page for anyone right now without these changes. It’s also much more selectively targeted than it used to be, I think the game’s tags combined with our good review scores (93% positive reviews out of 530+) mean that Steam’s algorithms have a good handle on the game. While that in itself doesn’t mean the game’s matching its launch sales, it’s doing a lot better than it did last month.

Interestingly enough, our next largest source of visits are other game pages, although this took some figuring out: 30% of our total visits come from just 3.1% of our total views at a whopping 65.6% click-through rate. That turned out to be a little too good: The incredible views (33,000 of them) come from the Discovery Queue, which doesn’t seem to track impressions in the data. The only source of impressions comes from the More Like This entry, so it could be that there’s either a set of impressions missing (probably because the queue doesn’t display a capsule graphic), or the queue’s impressions are rolled into More Like This. Either way, it’s not like those views are going to evaporate if the data gets better.

The Discovery Queue also seems to be at the root of another thing we noticed after Steam went blue: More people have Desktop Dungeons on their wishlists now. The Discovery Queue makes it super easy to click through to a new game and wishlist it so that you can keep discovering new stuff.

Curator recommendations supply 84,000 views and 2,600 visits. Their 3.17% click-through rate is better than our launch rate, but the front page and game recommendations are simply better. Desktop Dungeons is in a few respected curated lists, the largest being Rock-Paper-Shotgun and the comments are universally positive, so the game is definitely curated. We might see an increase in traffic from lists in the future, but I suspect that recommendation algorithms filtering lists might be the thing that makes that happen. “Recommended for you from this list” should at least be a viewing option there.

Curators probably affect your sales more directly when featured on your game’s page with good blurbs, or when players recognize a curator that they feel carries weight for them. Disabling all the curated lists on a game’s page would be an interesting experiment to run. 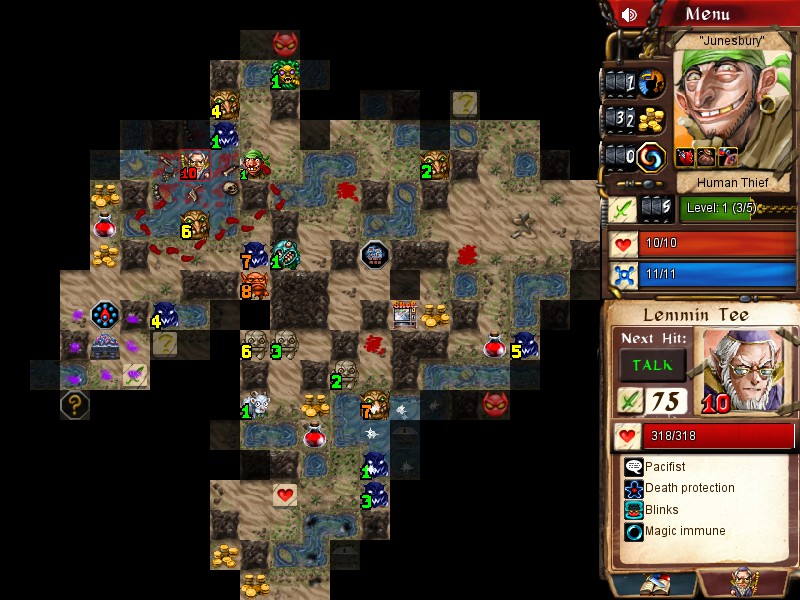 A particularly confusing Desktop Dungeons screenshot, because you expect me not to?

So what about new games?

I’m not sure how newly released games are going to benefit from recommendation systems while their reviews and tags are being populated by users. Desktop Dungeons had the benefit of being pretty well “understood” by Steam when the discoverability update happened. We definitely got an initial boost in visibility from being on a set of early curated lists. People have pointed out that the changes mean that external press is even more important for your game’s success, I would argue that it’s always been incredibly important (and that if you were just relying on launch featuring to get people to pay attention to a game on Steam you’re being incredibly naïve) but it seems to be how you get your game curated and how people might care enough to review your game. Growing your recommendations is going to need user investment, that makes community really important – especially communities of players you’ve already established on Steam.

I would hazard a guess that Desktop Dungeons might be reaping the benefits of having a really good return rate and racking up some great playtime statistics. Obviously users that keep coming back to your game are great for you, but their repeated returns to your game on Steam might prompt them to review the game or otherwise get involved in your game’s greater community. I don’t say this to advocate only building randomly generated games, but more as a way to explain where the community of players came from that have helped the game make good use of the discoverability update.

Where to from here?

New traffic heading to your game page is useless if your page isn’t turning those (presumably) new players into buyers. The discoverability data gives devs a great way to play around with what they put on those pages, from screenshots and videos to feature copy and maybe even price points. I’m curious to see where this ends up going over the next six months. Best case scenario would be that the recommendation systems allow quality games to keep growing their audiences, that way everybody wins. I’m certainly happy as a developer: Desktop Dungeons is doing better than it was last month and we didn’t have to devote any time to marketing to make that happen, so we’re able to focus our time on updating the game and porting it to tablets.

Now, if you’ll excuse me, I have some ideas on how to make our Steam page sell the game a little better.