In the second half of October Facebook’s Instant games platform has seen a huge surge in users, and it’s down to one extraordinary sharebait app. OMG, from Supergene Inc. has surged from 31,000 users on October 19 to 58m daily users in just 17 days.
Conor O\'Nolan
Blogger
November 07, 2018

In the second half of October Facebook’s Instant games platform has seen a huge surge in users, and it’s all down to one extraordinary sharebait app. OMG, from an obscure Philippines game studio Supergene Inc. has surged from a base of 31,000 users on October 19 to 58m daily users in just 17 days. That compares with a usual top-ten figure of 10m. 58m represents 17% of all daily users on the platform. 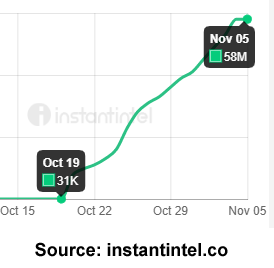 Although Instant Games is clearly a games platform, OMG is effectively a collection of clickbait sharing memes masquerading as quizzes. This clearly has been extraordinarily successful, as OMG now has 6 times the previous top-ten average games on the platform. Stalwarts like Everwing and 4 pics 1 word have been consistently popular but Everwing maxed at 14m users in June and 4 pics, which had a previous life on IOS and Android, has had 5-7m users for most of 2018.

Probably the most interesting effect of this surge has been the parallel growth of Instant Games as a platform. On October 19, the platform had 255m users, down from a height of 270m in July. By November 4, this had risen to 312m, exactly matching the surge in OMG.

A further indication that the OMG success is new users is a comparison between the top-ten games from early October and November 5. That 10 had a combined user figure of 72m, and by early November that figure had only dropped to 70m.

Indie developers on the Facebook Instant Games group have been in awe of this progress. Some have even suggested that the surge could be good for the platform by bringing in many new players for Instant Games, once the thinness of OMG has become obvious. British developer Matthew Hopwood commented about the potential for Facebook, given that the ‘game’ isn’t a game. “I think they are probably sat cautiously watching and waiting. This has the potential to make or ruin IG”.

Performances like this will inevitably spawn clones. WOWW is a similar clickbait app launched on October 26, and starting November 2 jumped 1.8m per day to reach 3.6m on November 4.