Satoru Iwata in quotes: The personality, the programmer, the leader

We've gathered just a handful of quotes that reflect the late Satoru Iwata's personality, influence savvy, and opinion on video games -- where they are and what he thought they should become.
Kris Graft
Publisher
July 13, 2015

The untimely passing of Satoru Iwata has led to an outpouring of condolences from people both inside and outside the game industry, for good reason. Iwata was not only a thoughtful business leader, but also a committed person who worked his way up the ranks in the game industry, as a programmer at HAL Laboratory to the head of one of the most powerful entertainment companies in the world at Nintendo.

We've gathered just a handful of quotes that reflect Iwata's personality, influence, savvy, and his opinion on video games -- where they are and what he thought they should become. His influence will be felt for decades to come.

"My actual last work on programming happened when I was working as the general manager of corporate planning at Nintendo. Something happened and the Gamecube version of Super Smash Brothers didn't look like it was going to make its release date so I sort of did a code review for it (Wry Laugh)." – Iwata, also a talented programmer, admits in a 2014 interview to getting very hands-on with 2001’s Super Smash Bros. Melee, even as an executive.

"I sincerely doubt employees who fear that they may be laid off will be able to develop software titles that could impress people around the world." – Iwata in 2013, explaining why he didn’t lay off workers and restructure the business amid Nintendo’s financial challenges.

"Mr. Miyamoto taught me a painful lesson: Content really is king. His games outsold mine by a huge margin. I found out then that engineering is not quite as important as imagination. To be honest, I was ashamed." – Iwata reflects on how his technically-superior games were outsold by luminary Nintendo designer Shigeru Miyamoto’s iconic games.

"Video games are meant to be just one thing. Fun. Fun for everyone." – Iwata in the GDC 2006 keynote, "Disrupting Development."

"I truly need to reflect on the outcome of this year-end sales season, which, in my opinion, was the worst year-end sales season in the overseas markets since I became president, and I would like to bring them back on the right track as soon as possible." – Iwata sought to turn around an ailing Nintendo in early 2014. 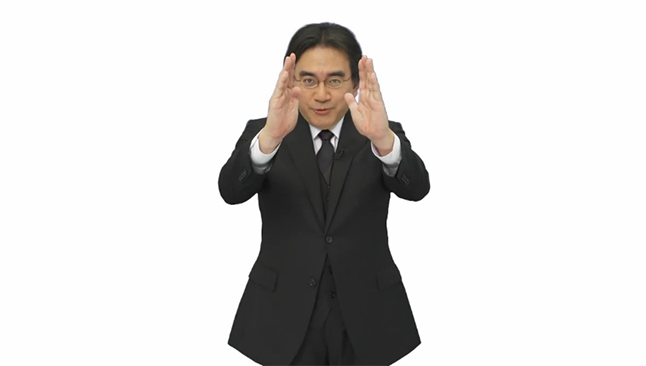 "It's not as simple as enabling Mario to move on a smartphone." – In January 2014, Iwata continued to answer press inquiries about bringing Nintendo games to smart phones. Eventually, the company made a deal with DeNA to do just that.
"If you do the same thing as others, it will wear you out. Nintendo is not good at competing so we always have to challenge [the status quo] by making something new, rather than competing in an existing market." - Iwata outlines in 2013 the "blue ocean strategy" that led to Nintendo's most recent success in games and hardware.
"The job of a programmer is to produce good work, meaning that the planners and designers shouldn’t feel the limitations of the hardware. I tell my programmers to think carefully before they say something ‘can’t be done.' There isn’t that much that can’t be done with a little ingenuity." – Iwata in the 1994 book, Introduction to Game Design.
"I believe that if we don't make moves to get people who don't play games to understand them, then the position of video games in society will never improve. Society's image of games will remain largely negative, including that stuff about playing games all the time badly damaging you or rotting your brain or whatever. If that happens, then even people who enjoy games will start to feel a strange guilt when they play them. If people who haven't played games up til now start playing them, and appreciate how enjoyable they are, it is highly likely this situation will change. Society will be more accommodating towards people who play games, and it will become even easier to produce more conventional games." – Iwata on the state of games, speaking in an Asking Iwata installment of his well-loved Iwata Asks interview series.
"Thinking differently and holding strongly to your strategy can disrupt an entire industry, and in a good way." – Iwata again in his GDC 2006 keynote, "Disrupting Development."

"1. lots of patience. 2. a glint in the eye. 3. liking games" – Iwata’s answer to the question, "What qualities are necessary to be a game designer?" in an October 1985 interview with Beep!

"(laughs)" – Iwata, often, in every edition of Iwata Asks.