Race The Sun, A Month After Launch: Losing Steam

We launched Race The Sun one month ago via our website and the Humble sales Widget, and a professional PR campaign. Here is a summary of our experience. Spoiler: Distribution platforms like Steam seem critical for commercial success.
Aaron San Filippo
Blogger
September 18, 2013

It's been  a month since we launched Race The Sun 1.0 via our website, using the Humble Widget. It seems like a good time to talk about numbers.

Spoiler: Launching a PC game without a major distribution platform such as Steam, is asking for trouble.

For those not familiar with Race The Sun, it's a procedural racer, with a sort of retro "Star Fox-esque" aesthetic, and an endless world that generates daily, along with daily leaderboards and a unique solar-powered mechanic. We've been working on it for over a year now, first launching a very early "alpha demo" on Kongregate, then running a successful Kickstarter in March '13 to fund further development. We've been selling "early access" copies for most of development, and using feedback and statistics to continually improve the game. We've tried to go beyond the simple "endless runner" formula, by adding features such as portals that take you to other worlds, and a built-in world creator with mods hosted on our servers.

We've also had the game on Steam Greenlight for over a year now. Currently we are just outside of the top 100.

Given our past experience with PR, and the high investment we'd put into the game's development, we decided to hire Evolve PR to help with our launch to give us the best shot at success. Brian from Evolve had reached out to us after PAX East because he loved the look of the game, and some of the introductions and early media attention he was able to get for us convinced us that they were a good fit for us.

Brian had some great suggestions right away that we hadn't thought of: We would hold a "public beta" in the weeks before launch to try and build up a fanbase and bolster our user-created content. He also planned out several bursts of announcements: The "Apocalypse Mode" reveal, previews, Let's Plays, and reviews. He recommended us to Joystiq for the "Indie Pitch", and got us mentioned or featured on almost every major game site including Kotaku, Polygon, Gamespot, Gametrailers, Destructoid, and others. Perhaps most importantly, he handled all of this while we were able to focus on finishing up development in the last few frantic weeks.

Finally, these weeks of planning culminated in our launch day on August 19th.

Ok, the part you've been waiting for: here are the numbers.

Website Hits
Since our website is the only place to buy the game at the moment, the hits on our website are pretty important. Here's what the graph looks like over our launch month:

As you can see, our hits peaked about about 4k hits in a day on August 21. We haven't gone below 1000 hits/day since then, and a "Race The Sun" google search has our site at the top. If you landed anywhere on Flippfly.com, Race The Sun is prominently displayed. The game's homepage was simplified for our launch: Just the launch trailer, and the humble widget below it. We wanted to be sure we weren't losing people on the website.

Despite the wide circulation for announcements, and a plethora of "let's plays" from midsize to large Youtubers, we didn't see a ton of actual "reviews" from major sites.

But the ones that did review it were generally very positive:

Overall, we sit at an 81 on Metacritic, and were previewed, reviewed, played by, or otherwise mentioned on well over 100 media outlets. Evolve did their job, and they did it well. More importantly, perhaps, the gamers who try the game seem to love it: A visit to the greenlight page's comments section is very encouraging for us, especially compared to when we first launched the campaign - we've found our fans, and we've made them happy.

The anonymous statistics we collect tell a similar story: On average, players spend over 2.5 hours in the game in each session.

Here's where the story gets a bit discouraging. In our launch month, we've sold 771 copies, or about $7,400 worth. 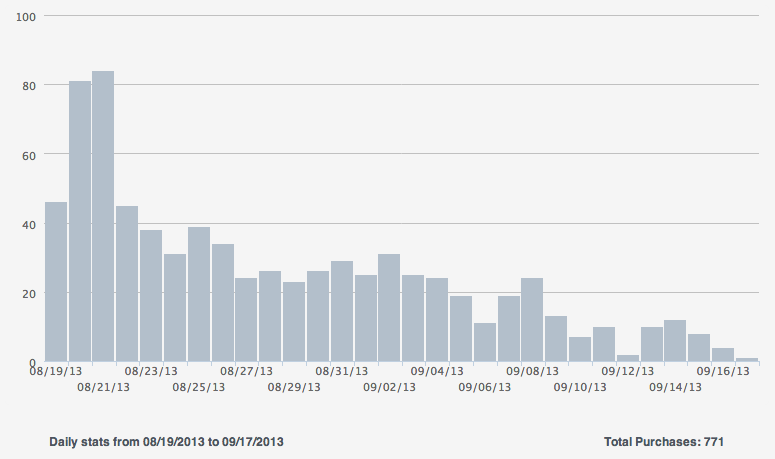 Sales have fallen off pretty steadily as the media attention has died down. Our worst day came last week, at 2 copies sold.

This may seem like a pretty big number to some - but keep in mind there are two of us, with families to support, and bills to pay. Additionally, the game's online features require a back-end server, and there are monthly costs associated with that, as well as our web hosting and other expenses.

About a year ago, we decided to pivot as a company, and re-focus ourselves on the PC platform, rather than mobile. Mobile has largely moved to "free to play", and this wasn't a direction we wanted to focus on as a two-man company. We felt that the PC audience was largely still happy to pay decent money for a good game, and so we focused our efforts on PC and Steam. It was about this time when Steam introduced Greenlight -  and at first, we saw this as an opportunity.

However, we've now been on Greenlight for over a year, and our launch has come and gone, and we're still seemingly a ways off.

I'm just not sure it's realistic to expect to be able to support yourself solely with self-distribution via your website in 2013, unless you're Minecraft.

The other thing we feel is a factor in our sales, is that we inadvertently shoehorned ourselves into the "Endless Runner" genre, without realizing the damage this would do. We felt the concept of an arcade-style, highscore focused game deserved a pure, HD treatment, free of microtransactions and with a focus on depth - and our customers seem to agree. But there seems to be an immediate and general stigma around this genre (thanks to the mobile revolution no doubt) - that "runners" should be free, and they don't belong on PC.

The final straw that convinced me that this perception has hurt us was the rejection feedback from Indiecade last week:

"I really appreciated the simple 3d visual design, and the progression was very well tuned. Also, procedurally generated levels ... are a nice touch. However, this genre of game is fairly well played out. I hope you are releasing it for iOS and Android."

We're still targeting Steam, as we feel it's our best chance at success without a F2P redesign, and a great fit for the game's social features. but we've got a long ways to go on Greenlight: 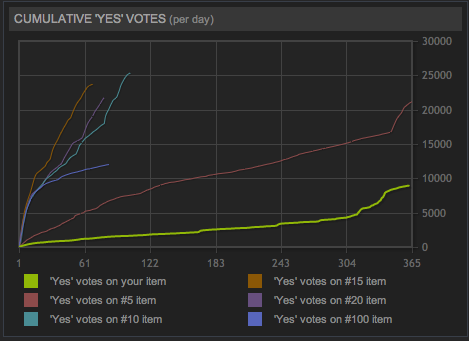 If we can double the votes we've had in the past year, we'll be in the top 10.

We've had talks with Kongregate about updating the web version of the game there, and we've even talked with Facebook, and considered how to do a mobile release. The truth is, those platforms are filled with gamers who prefer a free-to-play model, and we're not ready to jump into redesigning the game with that model in mind - not yet.

In the meantime, we're exploring other platforms, and distribution channels like gog.com, Amazon, and Desura, in hopes of finding sustainable income. We're also preparing our first update, with "featured user worlds" and other tweaks, and we plan to continue improving the game. But as I write this, we're running out of money, and will likely need to take on some other work to keep ourselves and our families fed for a while.

It's also worth pointing out that we've been approached a couple different times from publishers wanting to add Race The Sun to their portfolios. These were pretty appealing, but ultimately we decided that we want to retain our independence, and keep Race The Sun as a flagship Flippfly title.

It's hard to say exactly what we would do differently with this game. We took a lot of risks in investing this much time in the game, and we feel we've created something special. We've stayed true to our values, and created a game that we've never seen before. And we're hopeful that with continuing effort, we'll eventually get on Steam, and we'll find a steady enough income to support ourselves for awhile so we can continue improving the game and focus on what's next. The truth is, there is no sure-fire path to success in game development, and sometimes there are some detours.

There you have it! We're not anywhere close to giving up on this game, but it's been a rough start. Perhaps the biggest takeaway is that if you want to find financial success, you should not only make a great game, but partner with proven, trusted distribution platforms that can connect you with an audience that's ready to pay.

If you do feel inclined to buy the game or a poster, you can do so here, and of course, we always appreciate greenlight votes. Thanks!

(And yes, if you buy it now, you'll get a Steam key later if we get on Steam!)