It's been 9 months since I released my game, Prophour23. In case you never heard of it (very likely!), it's a fast-paced, replayable real-time strategy about building an organism and defending it from insects. You might call it a permadeath RTS.
I sometimes call it my first commercial game, which is a bit misleading. I made numerous games in the past, some of them were sold - but Prophour23 is the first game I treat as a complete work. It is (almost) exactly what I wanted it to be and how I wanted it to be.

I started working on it in the beginning of 2013. My plan was to make a short, replayable strategy game which borrows some elements from RTS and Tower Defense games. I had an idea for a new mechanics - the player wouldn't build any units, just "buildings". But these buildings could me moved around freely and connected in various ways to produce different effects.
I had a day job (and still do), so I worked on the game on late evenings. After two or three months I had a working prototype, which looked like this: 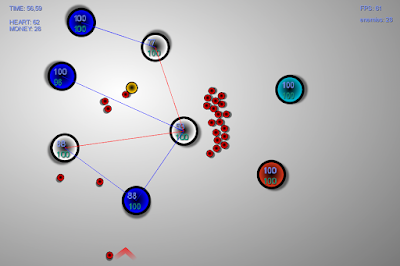 There's a heart at the center, big circles are "buildings" (with energy and health values inside), red circles are enemies. I don't remember what the yellow circle is.
Looks familiar, doesn't it?
It worked quite well, but required some design changes. In the next month I added "collectable" money and playtested some variations to the mechanics. 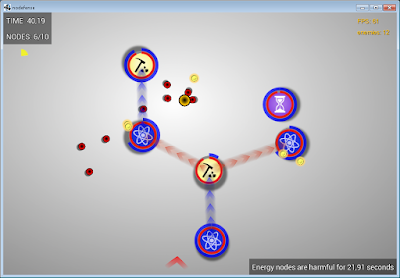 The connections have a direction now, so it's important whether you connect node1 to node2 or node2 to node1. The source always has an impact on the output. I also implemented the concept of small, randomized "missions" which give the player a clear goal for every moment.
I spent the rest of 2013 on designing a set of ~10 node types with different connection outcomes.
That's the beginning of 2014: 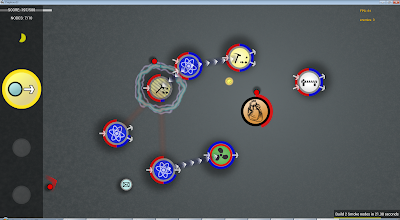 Every node has a limited number of inputs and outputs now (depicted by arrows on the sides of a node). I introduced the concept of addons: completing a mission rewards the player with an addon, up to three addons could be stored in the inventory on the left side. An addon could be put on any node; every addon has a different effect (e.g. heal the specified node, add a new output...). I was satisfied with the gameplay at the moment and decided that it's the moment to stop adding new things and focus on polish. Numerous node combinations made the game interesting, and the addons allowed me to create an even more different "machine" on every replay.
I already had a theme in mind: nodes would be organs and the player would create an organism. All portrayed as an old anatomy drawing. But the implementation wasn't easy.
February 2014: 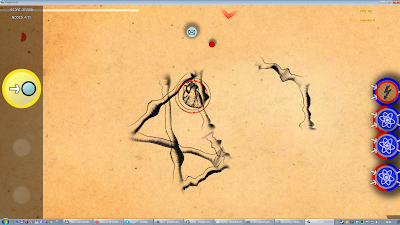 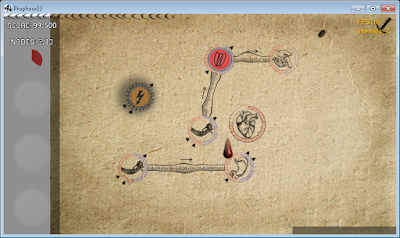 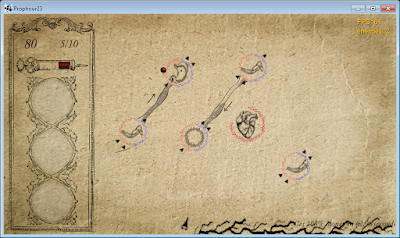 I'm not very good with drawing, so I asked my sister-in-law for making the organ drawings. She also helped me with general art direction. Check out her gallery!

I started adding sounds and thought about the music. I asked another family member (my cousin this time) to create a few tracks for the game. I had very specific needs (the in-game soundtrack is dynamic), but he managed to create these neo-classical pieces exactly like I wanted. You can purchase the soundtrack too!

My son was born in April 2014. You're probably aware that having a newborn baby doesn't exactly guarantee a good sleep every night... I still worked for a company every day, then spent some time with my family and crunched on my game later, while still trying to get a few hours of sleep (which averaged to maybe three hours every night, interrupted in the middle by my little boy).

I still didn't fully recuperate from this period.

But the game was moving forward. I wanted to have it done for August. I thought that would be a good moment to release the game, without any big releases around. But I was so tired that sometimes I wanted to stop working and just leave the game. I submitted P23 to Indiecade to motivate myself and it worked for a while. On another (rare) feel-good day I put Prophour23 on Steam Greenlight. That worked even better! I refreshed the page every few minutes to check for new comments and stats. It had a big impact on me. Suddenly, thousands of people were looking at my game and many of them were interested (or even excited)!

I couldn't sleep that night.

These were the days where I was able to sleep while standing, yet I couldn't close my eyes. Suddenly, thousands of people were looking at my game and many of them started having expectations. I felt some kind of responsibility that was bringing me down. Or maybe it was the permanent lack of sleep? I blitzed through Greenlight in 10 days or so. It wasn't that common then. I was excited to get my game on Steam, but I was also feeling unwell by looking at other games on GL. Some of them looked much better than mine, I knew some of the developers (and their games) which spent half a year (or more) on Greenlight... I bet you heard about the imposter syndrome, right? 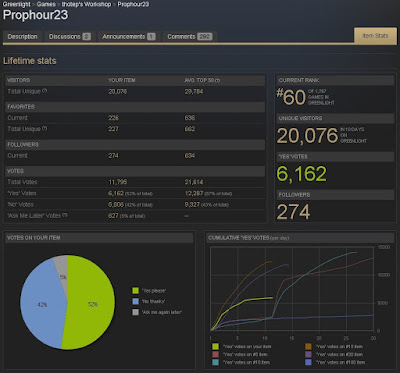 But I worked on. I added starting screens, options, tutorial... I created the game's site, I tried to get my game on GOG and Humble Store, I tried to share some elements of my gamedev process on social media to make people aware of Prophour23. After doing the Steam-related paperwork I started implementing Steam features (achievements, leaderboards) - thanks to the lovely PuppyGames, who shared their library with me! But I knew I'll miss my deadline. I decided to set a publicly visible release date on Steam to force myself to get it done by then.

And I released it on Oct 22 in 2014. The game was actually done 3 or 4 days earlier, but that's good - I had some time to create a new trailer, prepare build scripts etc. I planned to have a little launch party (that is: spend a calm evening with my wife at last), but it turned out that she needed to leave home that time. So I clicked the release button and got back to looking after my kids.

I'll cover the rights, wrongs and sales data in the second part!