We dive into some real behind-the-scenes info on our next project, plans for our existing games, King of Crabs success and plans for the future, as well as thoughts on community management as work for hire.
Andrew Smith
Blogger
August 11, 2020

ONCE MORE FOR THOSE IN THE BACK

I once again find myself trying to find a new way of saying that not enough has changed since we last wrote. Black Lives Still Matter. And in the spirit of positivity and progress, some things have changed a touch. There’s the potential for Breonna Taylors’ murderers to be taken to justice. The protests, though not on the news, are still going and still making a difference. But we want to see and do more, sat here with our white privilege and safety.

That takes me to the first section, which - while I’m still keen to be a little vague around - we’re starting to open up about, and will be announcing full details on soon.

We’ve been working away in our own time on a piece of content for Tango Fiesta.

This is something we care deeply about and have been honoured to work with some really talented and generous people on it.

We’re tremendously excited about the potential for it, and while a lot of people who are more business-minded than us might raise an eyebrow, I think the end result will be something hugely positive... I’d go as far as to say it’s our duty to do something like this, and I really can’t wait to see it out there.

As ever I’m (only slightly!) sorry we can’t be more specific, but you can likely draw some accurate conclusions based on what I’ve been saying here - and as I promised above we’ll be talking about it fully and openly as soon as we can. Which should be about a week or two from now.

We’ve been positively flipped onto our backs and critical hit by how many people are playing & enjoying King of Crabs on PC! We hit 200,000 downloads in 20 days, which is incredible, and purely ‘organic’ - we’ve not had any adverts or anything like that, just a cool steam page, busy servers, and some really big streamers enjoying it!

You can take my word for it when I say there’s awesome HELLA AWESOME content coming to the game over the Early Access period. It’s an odd situation because we’re more caretakers now than devs - Robot Squid are fully committed to bringing cool shit to the game and fixing issues with it too, so we’re kind of hovering around trying to help, but also trying not to be too distracting.

One of the more interesting things about the whole situation has been how we’re in a very real sense a key part of the game’s success, and we’re able to wholeheartedly get behind it and crow about it, and boast, basically sing about it from the rooftops in a way that, because we’re English, would feel really unnatural for one of ‘our games’. First lesson; stop that shit and be more American in the confidence we have in our own games.

Another aspect of that whole dichotomy is also down to us only seeing the flaws in our own games. Because we’ve not been in the trenches making King of Crabs from an empty Unity project all the way to now, we don’t see the flaws in the same way. We can’t see the bits that were compromised, the bits that went wrong, the bits we’re not proud of. And this is great because it means there’s nothing between us and appreciating the game for What It Is - nothing more, and nothing less. Which is the same as the audience, right? Second lesson; people come to your game with zero baggage. We would do well to remember that, and also be aware that there are no excuses either. Nobody cares why something isn’t fun, only that it isn’t.

It’s a real honour to work on something so blatantly fun and daft and just fundamentally about making people laugh. Games are great, aren’t they?!

We’ve got something brewing with our talented interns, in the form of a short prototype we’ve been making from scratch. It’s a different genre to anything we’ve done before because we like to stretch ourselves, but it’s an idea that’s been gently simmering away in the background for a few months. One of our next Patreon blogs will likely be a full deep dive into the game and its development, but I’m too excited so I’ll share some bits and bobs for you lucky lot!

First up, a bit of concept art for you! 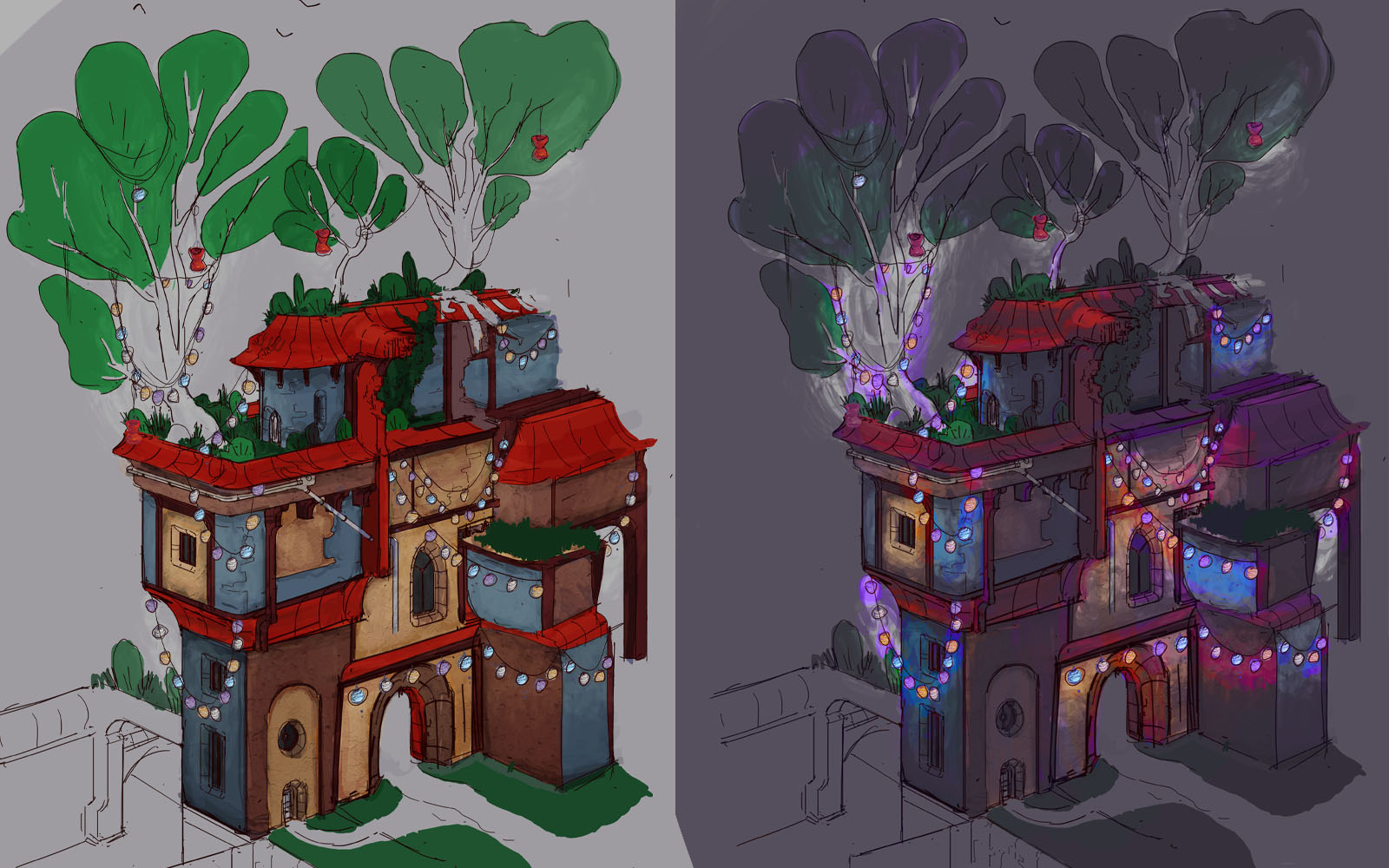 Here you can see we’ve got some early ideas around the architecture seen in the setting for the prototype, plus playing with the differences in how it would look in the day versus at night. There’s some stuff in here that gives serious hints about where this game is set, but I’ll leave that to you to guess at!

I'VE REMOVED MOST OF THIS SECTION - if you want to see it in full, you'll have to hit our Patreon up :D

We’ve had a few meetings with people and other sporadic interest around Stargrave Reapers too, which is exciting! We’re never ones to kill a pitch until all avenues are exhausted, and while we’re still a while away from getting to that point, certainly we’re narrowing down options so to have extra interest after all this time is very nice indeed.

We’re also spending a chunk of our time over the past month (and looking forwards many more months) solidifying what it is we want to do. Call it the mission statement, or our pillars, or even just a boring old business plan, but we’ve spent a long time making games we want to and taking opportunities that come along (or that we dig up) but we figure it’s about time we decide what we want to achieve over the next 10 years. The plan might change (in fact, it should) but we’ve spent a long time levelling up, meeting all the NPC’s and investing in the right gear. Now it’s time to choose an Ending to aim for, prepping for every fight along the way, and every Boss we need to bear to get there. Some of what you see above is part of the start of that adventure, but there’s plenty more to plan. As ever, we’ll share everything we discover along the way!

Please leave a review for Tango Fiesta - it helps us SO MUCH.
Go get King of Crabs, have fun smashing other players, then leave a review :D
Go play Super Doom Wall! Can you leave a review? I don’t know, but try anyway!

People are making a stand against fascism and the far right. We want to share the resources that we’ve found tremendously useful.

Uncomfortable Conversations with a Black Man - Part 4 now live! A brilliant video series talking honestly and without judgement about the kinds of problems that Black people encounter.