Opinion: Why there's no such thing as 'the game industry'

Necrosoft Games founder and Gamasutra contributor Brandon Sheffield makes the case (complete with multiple sources of data) that there is no longer a single 'game industry', if there ever was.
Brandon Sheffield
Blogger
February 15, 2018

There is no such thing as “the game industry.”

Anyone who uses neither voice actors nor microtransactions will immediately understand my frustration.

Put simply, there’s not one single “game industry.” There’s not even a single governing body that can represent all of us. It feels as though there are at least two “game industries,” nowadays. There's the triple-A world of big budgets, big releases, and large studios, and then there's, well, everybody else.  Indies, outsourcing studios, smaller and mid-sized developers, hobbyists. They don't play by the same rules as the big studios, because their circumstances are very different. When we get into business model, it’s even further fragmented.

There was a time, roughly 15-20 years ago, when big studios were the industry. You could say that EA, Konami, Capcom, Square, Midway, Activision, THQ and their ilk were the collective mechanism that fueled almost everything. But now they're in the extreme minority, not just in terms of the numbers of companies, but in terms of their number of employees. This has happened through mergers, closing studios, and fragmented teams, but overall, there are fewer people working at large companies than ever. I’ll do my best to prove this.

It's difficult to get real statistics on this, precisely because there isn’t just one industry to analyze. An old Game Developer research study from 2009 placed the number of game developers in North America alone at 44,806. But that number is far from perfect. That data is self selected and extrapolated, so doesn't paint a completely accurate picture. Plus, indies are basically impossible to chart. I’d place the global number of developers massively higher, but this gives us a little basis on which to think about this.

Let’s consider that soft number while also looking at data from the Game Developer's Conference’s yearly survey. GDC always does an exit poll asking developers to answer a series of questions about their working environment from the past year. From there, data about GDC-attending developers is extrapolated.

So what do we find here? In the 2018 report (from Gamasutra readers and attendees of GDC 2017), around 25 percent of developers responding came from a company of over 250 people – that’s the triple-A studios, to be sure. 9.6 percent of developers came from a studio of between 101 and 249 developers, down from 11 percent two years ago. Those companies are still big, but not necessarily triple-A. In total, at max, this would suggest that developers in the largest companies, those over 100 employees, represent 35 percent of the entire game industry. Everyone else was in smaller companies than that – in fact, companies of 5 or fewer people represented 33 percent of respondents. A full third of attendees came from the smallest companies.

(Note: The sample size for this poll was nearly 4,000, which is a pretty good sample. This info was sourced by me from GDC’s raw survey data. It should also be noted that most respondents were from North America.)

Now, again, these numbers are imperfect, but I'll add a couple other thoughts to this result. First, I would expect an *over-representation* of large sized game developers at these events. This is because large game companies have historically bought large numbers of passes, often 200 at a time, for their developers. So you would expect more people working in those companies to show up, since they often don't have to buy passes themselves.

Secondly, I’d imagine these large companies to be further over-represented because their higher salaries make them more likely to be able to afford to fly out to San Francisco, get a hotel, and buy a GDC pass. So I personally would expect to see comparably fewer developers from smaller teams at GDC. And yet, in 2017, a whopping 58 percent of game developers surveyed came from a team of under 50 people. That is the plurality of the industry, working in a team of less than 50.

If you combine this with the roughly 45k North American developers from the earlier report, that means some 26k game developers in North America work in smaller teams, give or take. 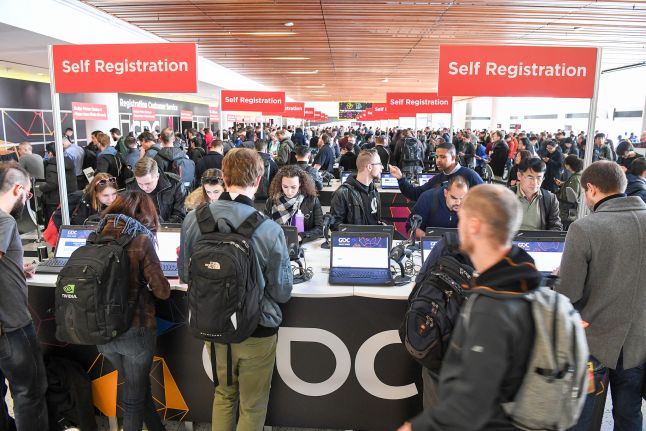 The variety of devs attending even a single event (here, GDC 2017) undermines the idea that there's a single, monolithic 'game industry'

So this is why it feels like there are many game industries – one in which big money, big teams, and big titles are the norm, and another more amorphous industry in which all the rest of us work.

Say what you mean

In a lot of articles about the game industry, and in a lot of idle social media talk, “the industry,” or “publishers” are depicted as one whole beast. An industry that's raking in cash, while not taking care of its contractors, viewing them as expendable. Or which only wants to squeeze money out of its players. But those articles and those people are really just talking about a handful of triple-A studios, which in turn is run by a smaller handful of people making those decisions. It's just not how most of us work.

Consider a three-person studio. If they want to get a trailer done, they can't possibly hire someone in-house. A three-person studio can probably release a maximum of one or two games per year. How many trailers would they need to make in that time? Contracting someone is the only option aside from developers doing it themselves (which is what my studio does).

Considering the budgets most smaller indie devs get for projects (if they get a budget at all), I find there are very few developers among that 58% of smaller-team devs who could even offer a full and decent wage to themselves, let alone contractors they hire. Can we expect them to even get healthcare for their employees? Can we expect them to have actual employees at all?

To figure out how healthy the smaller portion of the industry is, I did some armchair detective work, asking independent developers to reply to a poll. I asked: how many months of rent do you know for certain you’ll be able to pay? Here were the results. While 50 percent of those responding are doing fine, with 3 or more months rent definitely covered, the rest of us aren’t sure what we’re doing past the 2nd month’s rent. A depressing 26 percent said they can’t even cover this month’s rent.

Question for indie devs who pay rent: how many months' rent do you *know for certain* you can pay based on money you have, or which you are sure is coming in?

So you can say “the game industry will make $108 million this year,” if there’s data to support that. All of us contribute to that number. But you can’t turn around and also say “so why doesn’t it pay its voice actors?” or “and it has a gambling problem.” Not all of us contribute to those statements. I’ll use just one example: Minecraft sold its 122 millionth copy in 2017. Across the years, it has been a big driver of revenue, and a big chunk of the X billion dollars made by “the industry.” How much voice acting does it use? How many loot boxes does it sell?

You can’t heap the same expectations upon an EA as you can a team of five, neither from a consumer nor a developer standpoint. You can’t even put the same expectations on Minecraft, one of the biggest games in the world! Should voice actors get paid for their time? Of course. But should everyone in games be on the hook for the decisions of a few big publishers? Certainly not.

Language is important, and the language of “the game industry” doesn’t apply to all of us at once. Let’s start using more specialized language to describe what we really mean – big publishers, free to play, indies, startups, and so forth – lest we inaccurately paint everyone with the same brush, and harm ourselves in the process.