SEARCH
A minimum of 3 characters are required to be typed in the search bar in order to perform a search.
Business
2 MIN READ
News

New Zealand's gambling regulator--the Gambling Compliance office of its Department of Internal Affairs--has told Gamasutra that "the Department is of the view that loot boxes do not meet the legal definition of gambling."
Katherine Cross
Contributor
December 11, 2017

Responding to an email query, New Zealand’s gambling regulator--the Gambling Compliance office of its Department of Internal Affairs--told Gamasutra that “the Department is of the view that loot boxes do not meet the legal definition of gambling.”

New Zealand's is the latest regulatory agency to weigh in on the topic of lootboxes. Government officials, game developers, and players worldwide have been scrutinizing the lootbox monetization model, examining potential parallels with gambling. If officially categorized as gambling, loot boxes would require government regulation.

According to Trish Millward, a licensing compliance manager at the DIA, her office has been following the international debate closely. But, she said, they do not think that lootboxes meet the legal definition of gambling under New Zealand’s Gambling Act 2003. She added that, in any case, it was not illegal for New Zealanders to gamble online with overseas providers.

New Zealand’s government seems to be adopting a wait-and-see approach, which also hints at the complicated legal landscape awaiting game studios as regulators and legislators throw their gauntlets down on the lootbox issue.

There are, at present, a patchwork of legal frameworks to contend with; some regulators are taking an aggressive approach. From Belgium to Hawaii, officials are proposing laws to strictly regulate lootboxes.

New Zealand's comments come after Victoria, Australia'a gambling regulator told a student, via email, that their department considered lootboxes to be a form of gambling. Hawaii and Victoria hint at another problem for game studios: competing legal approaches within the same country.

But for now, at least, New Zealand seems to stand united in their belief that lootboxes are beyond its regulatory perview.

Some in the industry will be cheered by the New Zealand approach, which mirrors the favored argument of the ESA and ESRB--that because lootbox contents supposedly cannot be traded for cash, they do not constitute gambling.

This argument has its flaws and will be tested, certainly, but for now it forms the basis of regulatory policy in an important Anglophone market.

The Department of Internal Affairs email is reproduced in full below. 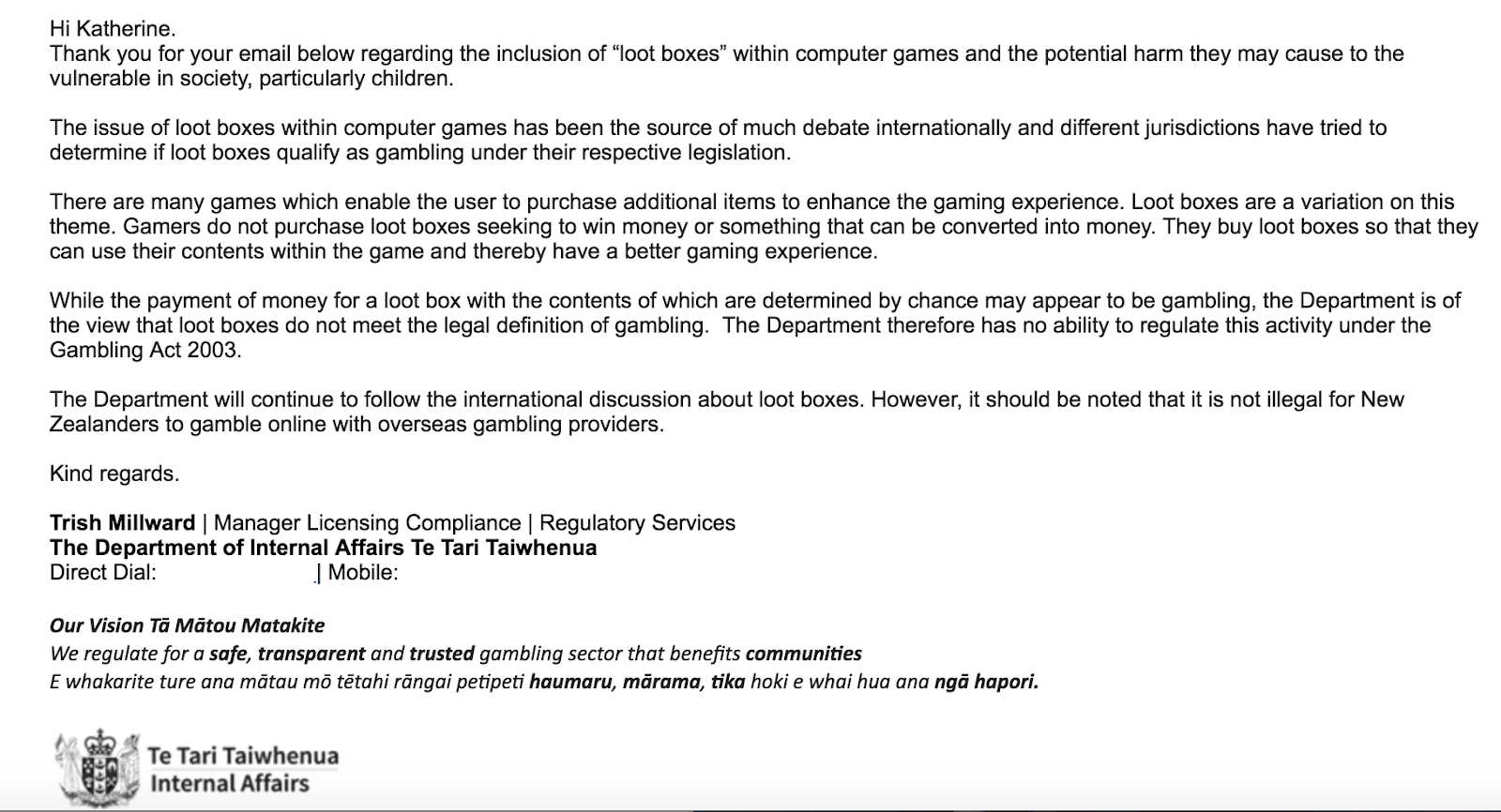