This was originally posted on the Impromptu Games blog, so "now" means May 19th, 2014. Not a lot has changed since.

Getting started, getting funded

InFlux started out, waaaay back in 2010, as something I was fooling around with at home while regretting enrolling in a game design course at RMIT university. It grew from there in a way I think I remember outlining in another post, so I won't elaborate too much here. Jorn, Matt, composer Jonathan Yandel and myself worked on it on and off through 2011, and in 2012, I applied for funding from Film Victoria's games funding programme (which is great, and you should definitely look into it if you're a dev in Victoria). I got it, and so I was able to work on the game full-time through 2012 and the first few months of 2013, and pay some Victorian contractors (Pub Games, mostly) to work on it as well. We say the game took about two years to make, but that was not in contiguous blocks of time. From sometime in 2012, I was also receiving NEIS, which is basically the dole for people who want to build a business.

The Film Vic funding was $39,500, which is not a huge amount for a game. It also came with the condition that only residents of Victoria get paid with that money - which meant that a few guys ended up working basically for free or for not-much. Also, the funding wasn't a grant, but an investment, which means it needed to be paid back out of a percentage of the game's sales.

As the game's development progressed, I had to start thinking about distribution platforms. The big one to aim for was obviously Steam - and hey, what's this? They're opening up their selection process?!?

I actually thought Greenlight was a great idea at the time, so I decided to submit InFlux immediately, as soon as Greenlight went live. I crowdsourced my alarm clock, as it were, by asking about ten people in different time zones to auto-refresh Greenlight and phone me when it went live to wake me up. It meant that InFlux was one of few games to benefit from Greenlight's initial influx (lol) of curiosity traffic. It made it onto the Top 100 instantly, and never fell off.

Even so, it would be almost a year before the game was approved, and that was a year of heavy marketing effort as I tried to accumulate Greenlight votes, while still developing the game and handling boring business stuff. Marketing your stuff, and yourself, all the time, is always a big part of your job as an indie developer. But when you're having to focus not just on spreading the word and getting coverage, but also on a tedious vote harvest, it's all the more fatiguing and demoralising. It also cannibalises your sales before you even get the chance to make any, which is something I'll come back to. 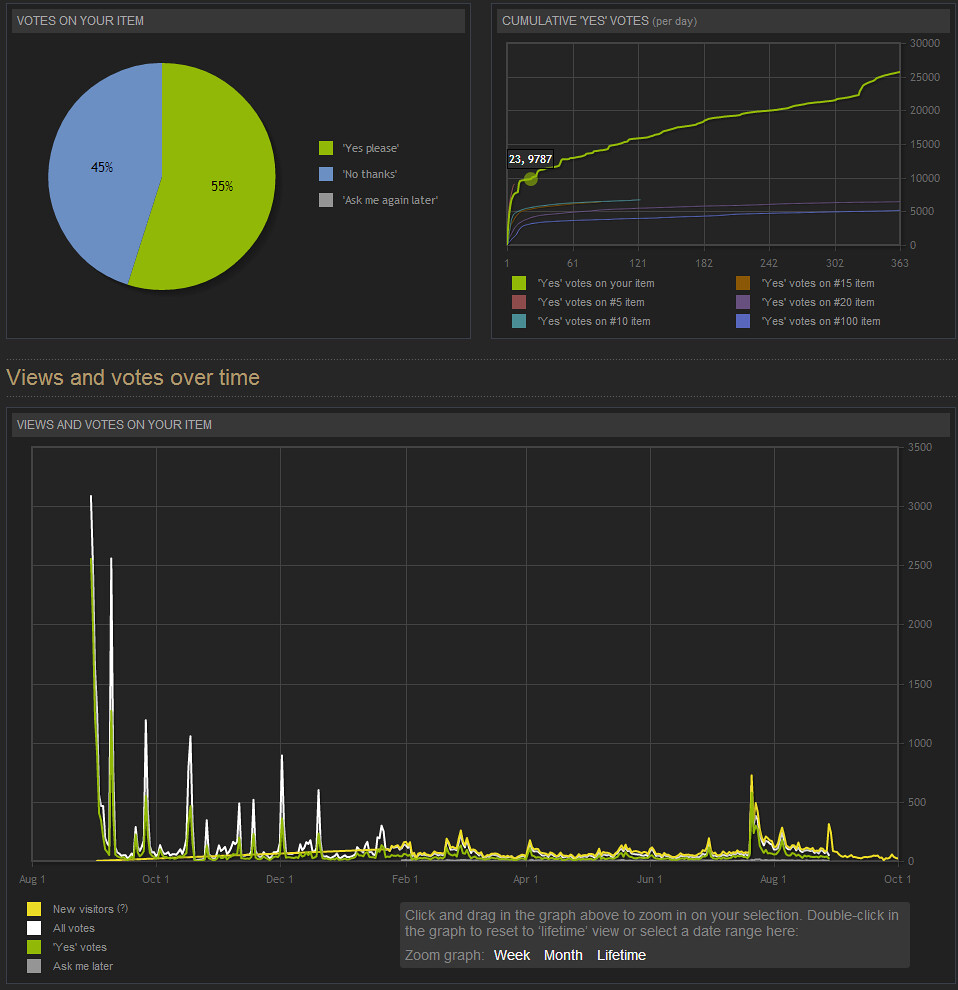 InFlux's Greenlight stat page. The huge initial spike is from Greenlight itself launching, and got us into the top 100. All the spikes after that are pretty much Youtubers, and then PAX Aus and the Humble/GOG launch.

Pricing and launching on Humble, GOG, Amazon, others

On July 22nd, 2013, just a few days after being exhibited at PAX Aus, InFlux was released on GOG and Amazon, and on influxgame.com via Humble widget. Greenlight still hadn't let us through, so those were the stores I was able to get it on. GOG was the biggest deal of the three, but it also forced us on pricing.

Without Steam, GOG was the only shot the game really had of making money any time soon, and it needed to, because I was out of rent money. We needed to ship on GOG. So when GOG told me they'd refuse to sell the game for any amount higher than ten bucks, I had to say "Welp, guess it's ten bucks". I'm still not happy about it. I don't think it's their place to strongarm devs on price, as they're apparently still doing. I don't want to give them too shitty a report card, as they've been perfectly pleasant to deal with generally, but this is a policy they really need to take another look at. 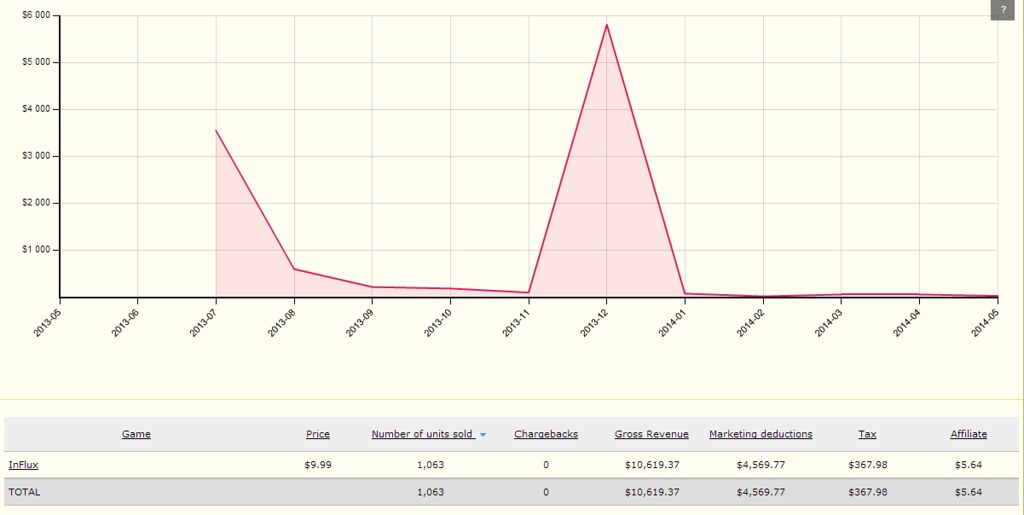 Sales stats from GOG. The spike was a sale organised by GOG, I believe.

As expected, GOG was the biggest moneymaker initially, giving us about $3.5k. This might sound like nothing, but it represented food and rent for me at the time, and felt like a pretty big deal. This graph spans from launch all the way to right now. As you can see, $4569 appears to have vanished on Marketing Deductions. I haven't really looked into what that is or means, but it seems like a lot to me.

Update: GOG got in touch with me about this. "Marketing Deductions are simply discounts. So whenever we’ve done a 50% discount, 50% of the price will show up as Marketing Deductions. Misleading term, I know!" Fair cop. (They did not mention the pricing issue).

Humble had a very similar curve to it, having price matched the GOG sale. In the first month, it grossed $1232, which, again, isn't much, but is bread and milk. One awesome thing about the Humble widget is that you can tip, and people actually do - in several cases we had strangers tipping $90 on our $10 game. I want to throw in here that Humble were just really really pleasant to deal with for me, I pretty much had no problems of any kind at any stage, and they even agreed to make a payment a few weeks early when I was down on my luck at one point. Like GOG, the sales died off pretty quickly and pretty completely, but Humble was definitely worth doing.

Amazon, on the other hand, was so not worth doing that I don't even have a graph for it. I think it made maybe fifteen bucks? I remember that fewer people bought it than commented on the user reviews for it. Go figure.

Inevitably, the game also came out on The Pirate Bay around this time:

An appeal to pirates on TPB to maybe buy our game after all. This resulted in a few pretty big tips on Humble.

The game is also available on GameFly. I have never used GameFly, and hadn't considered it until they approached us. It brought in something like $700 I didn't expect. InFlux shipped on GameFly some time after Steam.

I also discussed distributing the game with Green Man Gaming. My experience with GMG was really weird. We talked about it, everything seemed great, they sent me a contract, I sent them back a signed one, and they went radio-silent forever. I never was able to get another line out of them.

On September 18th, 2013, InFlux finally came out on Steam, having been Greenlit in the first of several batches of 100 games that Valve were using to stress test some of their new systems. As expected, Steam blew every other store out of the water. It's ended up grossing $72,404 as of now, although only $46,676 ended up getting back to us, which is how these things go. We were super, super psyched with this. At launch, the game spent about 10 days on the front page in the main capsule spot, which I'm told is a pretty good run. 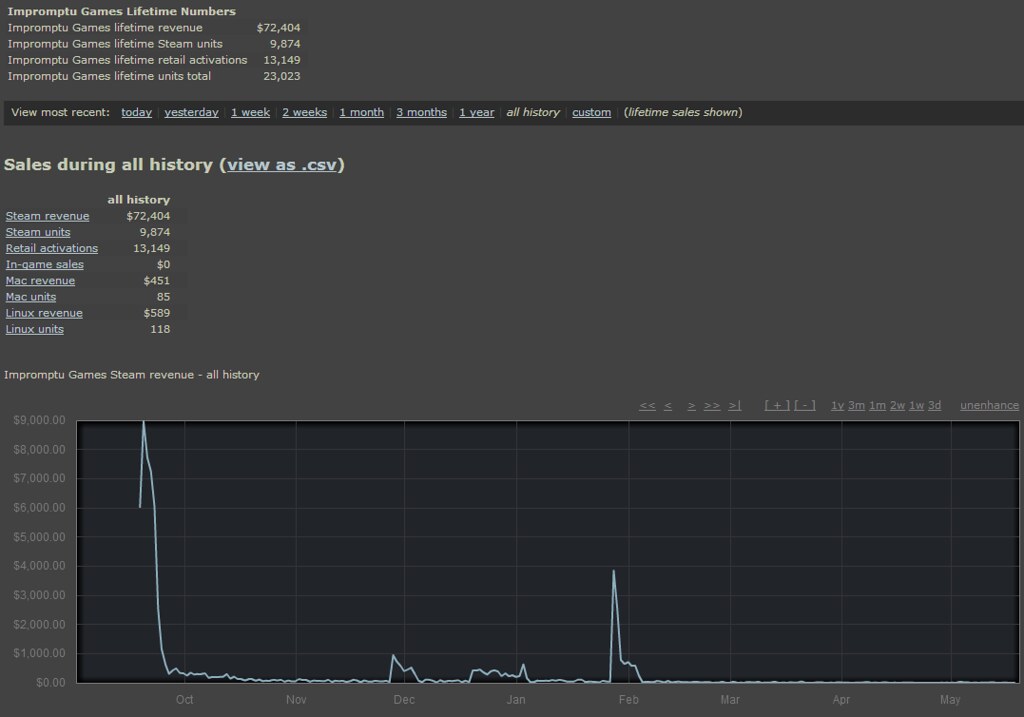 Steam lifetime stats up to now. The first spike is obviously launch. The second two smaller spikes are the Summer Sales, and the significant spike is a Weeklong Deal.

I was sort of surprised at how little the Steam Summer Sales did for us, and then very pleasantly surprised with the response to the Weeklong Deal. The major thing here is, of course, whether you're on the front page, and if you're not, how many clicks away from it you are. In the Summer Sales, we were discounted, but not featured. The Weeklong Deals are pretty much front and center on the store.

So, getting back to how Greenlight marketing cannibalises your sales: because of how Greenlight works, you need to get as much press coverage as you can as early as you can, well before you ship. And because of how the press works, most places really only cover your game once or twice, maybe. This is especially true for Youtubers, who are some of the biggest sources of attention for indie games in existence - they're not going to do a whole new Let's Play when your game comes out if they already did one to help you harvest votes.

It's possible - and very easy - to blow your entire marketing wad on Greenlight votes, and have nothing left over to accumulate actual sales with, months later, when your game's released, but everybody's forgotten about it. Steam also does nothing to notify yes-voters that your game has been Greenlit, and you have no way to get a message out to those users. You just have to hope they stumble across it again. Spoilers: probably they won't.

While we haven't been able to get onto the Humble Bundle or anything, which would be amazing, InFlux has been in two bundles so far, the Blink Bundle and the Daily Royale. Daily Royale made about $550, Blink made about $4000. For us these were totally worthwhile. Still holding out for Humble, though.

The Blink Bundle folks were really nice to deal with and timely and up-front about everything. It was a really positive experience and I'd definitely be happy to work with them again.

The Daily Royale wasn't as good an experience. Once we'd agreed on the bundle, I wasn't given a date for when the sale would actually happen. Then, once the InFlux day-long bundle went live, I wasn't informed - someone unrelated on Twitter happened to draw my attention to it. If they hadn't, I wouldn't have found out at all. When they paid me, which took longer than anybody else, they did so via Paypal for some reason, which knocked off 20 or 30 dollars from the payment in fees. This was dumb, and no other distributor I know of does it.

Most of a year later, InFlux sales have pretty much stopped, and what with one expense and another, the company account will be down to maybe $12,400, after we make our first payment to Film Victoria, which is going to be something in the neighbourhood of $18,000. It's an uncomfortably low amount to be trying to make video games with on a very slender income, and the current evil Australian government has just cancelled all federal funding for game development, so I'm not sure what happens next for Impromptu, but hopefully something'll work out. If you want to help, there's a Steam link at the top of the page.

Hopefully this has been helpful! #thankseverybody