In Bad Times And In Good Times

An Open Letter to the Undead Labs Development Team

As we roll into the end-of-year holiday, I’ve been thinking back on the past year and marveling at how far we’ve come. Together, we have created a game development dream team and a rocket-fueled development culture to nurture it. In my fifteen years in the game industry I have never seen a game start coming together so quickly. I feel incredibly fortunate to be able to make my living doing what I love, alongside people I greatly admire and respect.

I know you are here because you love the game we are making. But since I am now the “suit” -- albeit one who wears an Undead Labs hoodie every single day (my secret: I have four of them) -- it’s my job to reward your hard work and dedication by ensuring you receive a fair share of what you create.

It seems obvious that there would be an industry-standard incentive plan in place to reward game developers when they create exceptional games. I think we’d all like to believe that some decent portion of every dollar we spend on the games we love finds its way into the hands of the people who actually created them, but we all know how rarely that actually happen

Far too often a best-selling game rewards executives who had little to do with actually making the game, with little going to the people who lived and breathed the project and worked all the late nights and weekends to make it come together.

There have even recently been some high-profile cases of teams apparently being scammed out of promised bonuses and having to go to court because of it. Sometimes there is a legal loophole or accounting mechanism that results in “profit” being defined differently than the developers expected. More often, there was nothing in writing at all, and they were simply told, “Trust us; we’ll take care of you.”

Good luck with that. 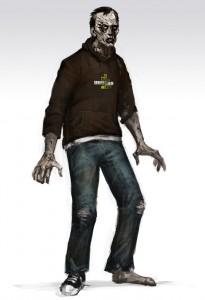 When I created Undead Labs, I committed to offering you a written, legally binding profit sharing plan. It’s not just that it’s The Right Thing To Do; it’s also good business. Profit sharing plans are not just a reward; they’re a motivator. But they can’t be a motivator if they’re vague and unwritten. In my opinion, “Trust us; we’ll take care of you” just doesn’t cut it.

The Undead Labs Employee Profit Sharing Plan is a binding commitment to give you a share in what you create. It’s a written, formal contract from the company to you that clearly spells out how profit is calculated, how it’s distributed, and the provisions that are in place to ensure that the plan cannot be changed arbitrarily or at the whim of future managers or owners (over my dead body, of course).

I’m proud that our studio is willing to put a profit sharing plan in place and stand by it, both before and after there is actually profit to share. I think it’s a better model for our industry, so I’ve decided to share our plan publicly by posting both the standard English version and the formal legal version to our website under a Creative Commons license.

I contacted our attorney Steve about my decision and received this reply:


With regards to posting the whole thing online, I actually would caution against that. You have put a lot of brain power and money into putting a very sophisticated, elegant profit sharing plan together. This is a trade secret of high value to the company. If you post the entirety of the structure online, you risk the potential of other developers copying your structure and thus you lose a competitive advantage.

Steve is doing his job (and he does it quite well), but what he didn’t understand at the time is that I actually want other studios to copy our plan.

My hope is that those studio heads that do not already offer a written plan can use ours as a template and offer it to their own developers. It’s a great way to treat developers. And it’s just good business.

Trust is earned, not granted. I hope to earn your trust by creating a fair plan, putting it in writing, and standing by it.

In bad times and in good times.

Enjoy your holiday, Team Zed. Hang out with your friends and family, eat well, play lots of games, and rest up; because when January 3 hits we’re going back on the rocket fuel.