How to keep players in your game via app reviewsÂ

When it comes to working with user feedback on app stores most game developers tend to react to negative reviews with a 1-star rating, considering them the most important and urgent.
Kate AppFollow
Blogger
October 09, 2019

When it comes to working with user feedback on app stores most game developers tend to react to negative reviews with a 1-star rating, considering them the most important and urgent. Bad news — these players have most likely already uninstalled your game and won’t give you another chance anytime soon.

The good news is that the rest of the reviews contain information about bugs and crashes, annoying ads, difficult game levels, and local problems which you should not overlook if you want to keep players in the game.

But how to navigate through the thousands of reviews players leave on stores every day and pick only those that matter the most?

3 types of game reviews you should watch out for

We at AppFollow have analyzed 7 million of App Store and Google Play reviews to understand how the length of a review relates to its rating:

Working with long reviews is a great way to improve not only player loyalty but your game as well. No matter whether they give a 2- or 4-star rating, the fact that they invested this much time into writing such a detailed review shows that they are not indifferent to your game and want it to become better. 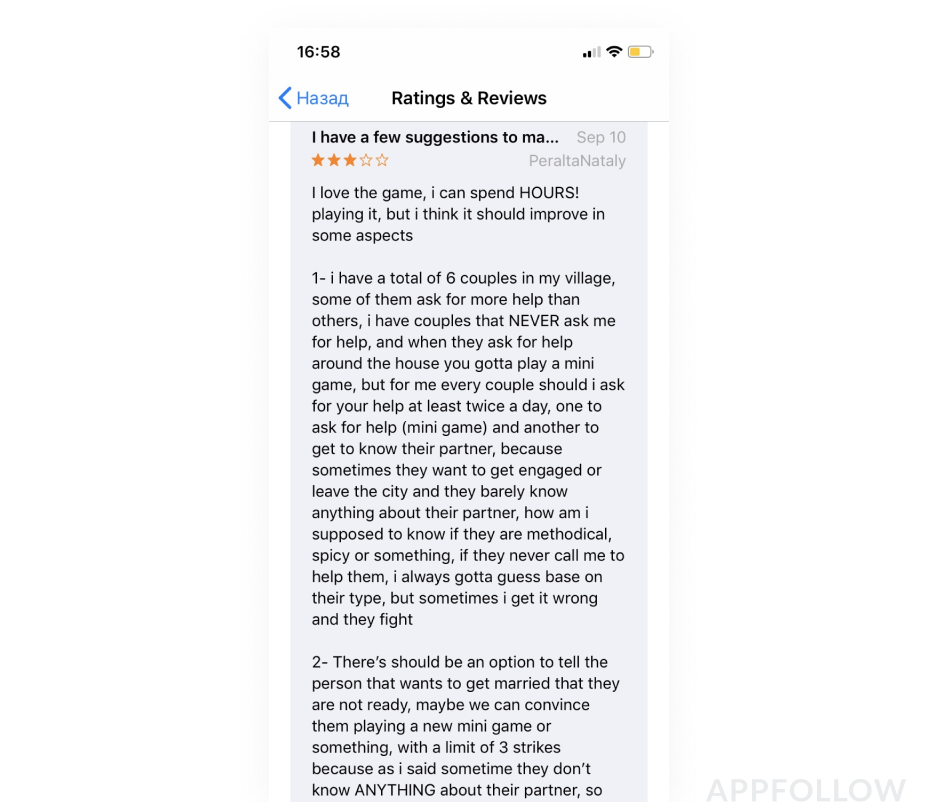 Long reviews are like gold dust for game developers. Source: The App Store

When replying to such reviews, don’t limit your answer to a short “Thank you” note. That will be more likely to infuriate these players rather than make them more loyal. On the contrary, your sincere response will make them feel appreciated and that their feedback was valuable.

If players ask questions or suggest a feature, then tag or collect these reviews. This approach will help you find them so you can update your reply once you’ve fixed the issue or added something they wrote about.

Another powerful way to keep users in your game is to monitor review updates and react to them in a timely manner.

Ratings changing for the worse, for example from 4 to 1 star, is a warning sign that your players are experiencing problems. Without the developer’s attention to their case and a quick response, these players may uninstall the game.

One user updated his reviews 19 times in a single week in attempts to bring the developer’s attention to issues in the game. Source: appfollow.io

The most frequent problems and requests

In their reviews many players write about the same problems or ask for similar features. The semantic analysis comes in handy here and allows you to quickly spot:

Analyzing reviews by topic and addressing them at once can help dramatically improve the loyalty of a big group of users. Moreover, according to research we have recently carried out, 15% of users update their review and rating after the developer has answered. So, this will positively influence not only user retention but your game’s average rating on stores as well.

20% of Township game players wrote about IAPs price in their reviews in September 2019. Source: appfollow.io

How to measure the impact of your answers

How to understand that your work with reviews achieves results? While an average rating of 4.5 stars and above could be a long-term target, we recommend the tracking of updates to answered reviews and their ratings:

Also, keep an eye on player satisfaction scores and the correlation between positive and negative reviews. A score closer to 100% means that users are happy overall with your game.