How to Become A Unity Developer (Complete Beginner's Guide)

Have you been researching how to become a unity developer or how to learn game development? If so, then you have come to the right place! Today, we will be taking a look at a variety of different topics that are closely related to game development.
Bernard Polidario
Blogger
October 19, 2020

Have you ever wondered how game companies created their games? Have you been researching how to become a unity developer or how to learn game development? If so, then you have come to the right place!

Today, we will be taking a look at a variety of different topics that are closely related to game development. However, we’ll be only focusing on one particular game engine and that is Unity and by the end of this article, you should be able to answer the following questions:

But before we get to the actual process of how to become a unity developer, let’s understand first what is Unity and what makes Unity stand out from other game engines. 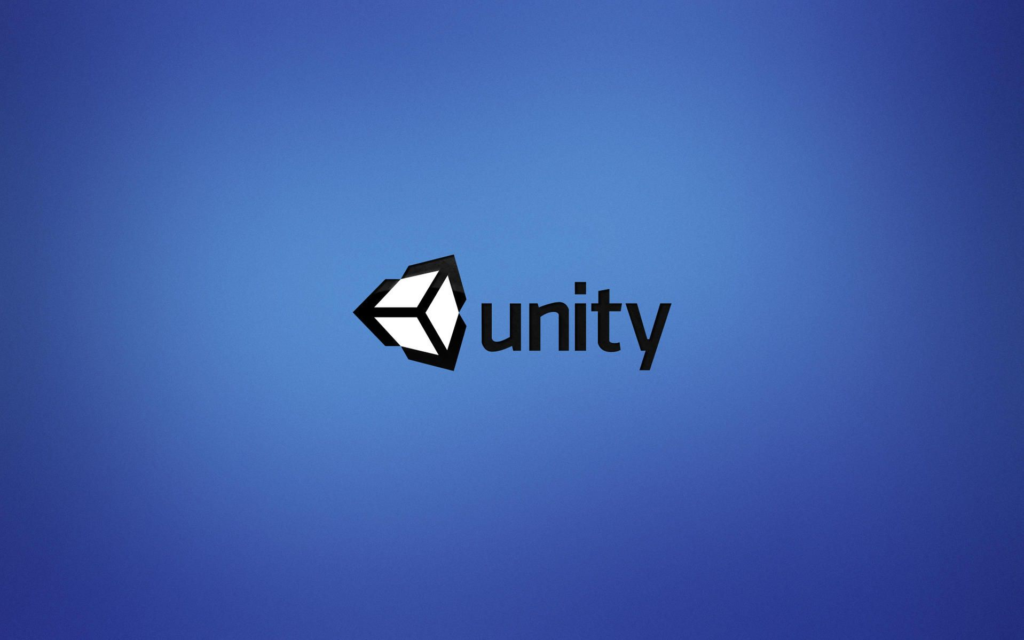 Unity is one of the most popular game engines that you can use for game development. It is just so good that you can create games in just 10 minutes or less. But what makes it stand out from other game engines?

Unity vs. Other Game Engines

The following are the features that make Unity stand out.

Compared to other game engines, Unity is one of the easiest tools to learn. In fact, if you ever get lost, you can easily navigate to their manual page through the help tab.

Well, it’s just a manual. Do you say?

Their documentation is very straight to the point and easy to understand and navigate through. It’s like their manual is not only meant for beginners but also for the ones that have experienced Unity. 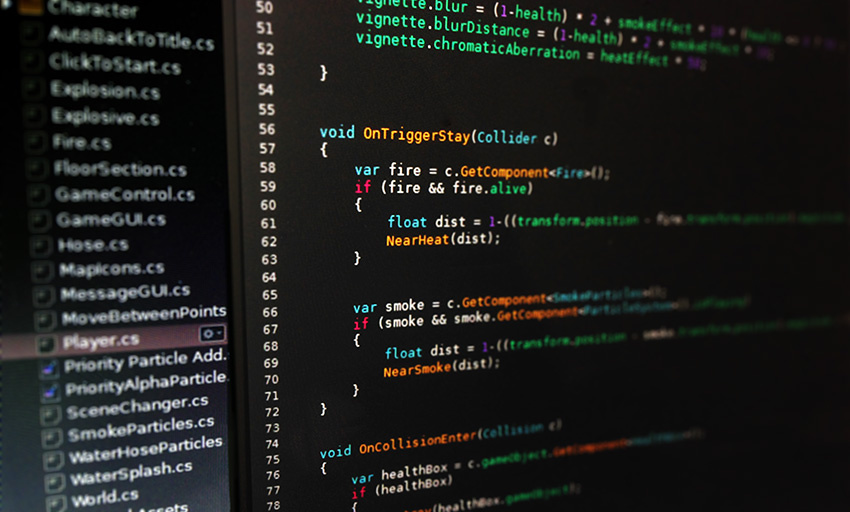 Unity used to work with JavaScript (also known as UnityScript), Boo, and C# all at the same time but since working with three programming languages at the same time is one hell of a job, they decided to get rid of JavaScript and Boo, and stay with C#, which we believe is a good decision.

So you know C# already but still don’t know how to use it with Unity?

Unity offers a multiple platform development which means you can build your games for android phones and later on build it for iOS, Windows PC, Mac, and other platforms without having any issues at all.

Unlike Unreal Engine, Unity allows you to create complex projects for low-end devices without requiring a powerful computer setup. However, if you are looking to create a project that is too detailed then obviously none of the two will help you out. So if you think your computer is not the best then we suggest you start with mobile game development or casual game development.

With that said, Unity is the best game engine for developers who only have low-end computers.

Compared to other game engines, Unity is very affordable. In fact, if your plan is to just learn game development, you can have Unity personal license for FREE!

Unity has the best and most active community ever. Compared to other game engines, Unity provides a very good community that can support you throughout your game development journey.

Not only that, but Unity is also everywhere. You got scripting issues? search it on Google and you will find your answer immediately. Do you want tutorials? We have plenty of gaming tutorials here dedicated to Unity development.

How To Become A Unity Developer: Step by Step Guide

We’re not going to lie but learning how to develop video games is hard. Not only that but it also offers a TON of work. However, if you compare it to other skills or career paths, becoming a Unity developer is actually one of the easiest and coolest choices you could ever make!

If you’re still reading all the way here then that makes you really fit for this kind of career. Let’s get through the process of becoming a Unity developer.

Step 1: Understand Why You Want To Become A Unity Developer

The first and one of the most important steps on how to become a Unity developer is understanding and identifying your reasons for why you want to become a game developer.

Why do you want to learn game development?

Is it because you’re just curious about how games are created? or you really want it to turn into a career? or you have game designs in your head that you want to become a reality?

Most games especially the ones that are created by big companies are often created by multiple people with different roles. There are game designers, animators, 3D modeling, programmers, and sound designers.

Now, why is this important?

Well, understanding the purpose of your quest and knowing what you really want to achieve will not only benefit you but also save you from future headaches.

You see, game development is a very tedious task especially if your game projects are overly huge. 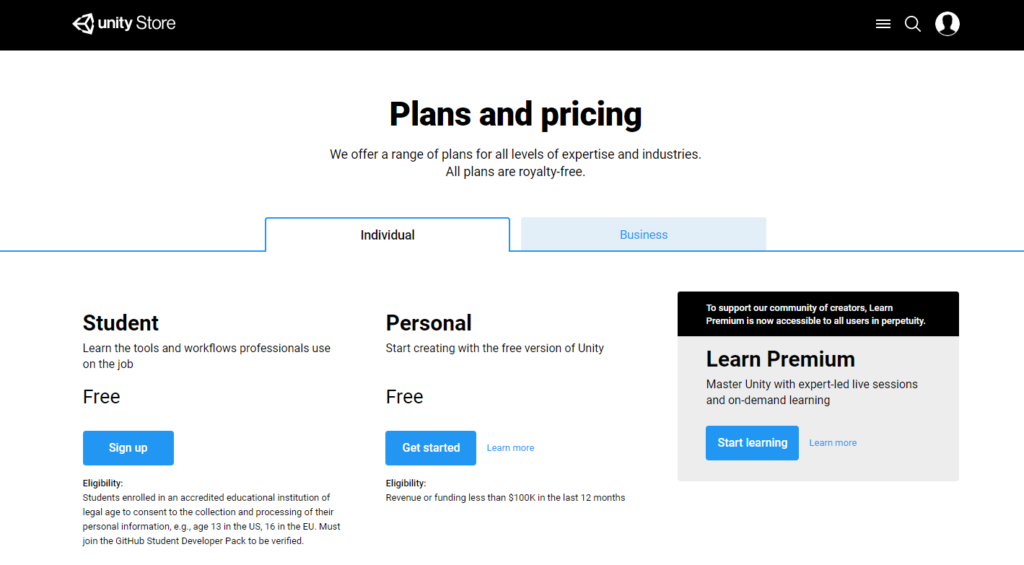 Before you can start learning how to become a Unity developer, obviously, you will need to install Unity into your computer.

Once you arrived at the plans and pricing page, just select Personal under the Individual tab and this should allow you to download the latest Unity Hub Installer.

Once you are able to use Unity, play around, and understand each corner of the editor. Unity also provides free projects that you can download from their Asset Store and so if you ever get confused or lost, this is where you can use their documentation.

Another way to fasten your learning journey is by taking Unity courses online. However, if you’re not interested in spending money on these courses then YouTube is your best option.

There are hundreds of free videos online that can help you understand how to use Unity. We recommend our good friend Brackeys. He provides good and straight to the point tutorials that will surely help you start.

If you’re really serious about becoming a game developer then you have to commit to it. It’s unfortunate that we often see game developers start their project and after a couple of months they just get sick of it and stopped working. This is mostly the case especially if they only care for the profit of their work.

If you really want to become a Unity developer then you have to make sure that you finish your projects. So don’t stop and just focus on finishing your projects.

Well, that could be true that some game projects may take much time longer than 6 months but the whole point of learning to become a Unity developer is to start from a small game. We suggest to not look too much into detail like animations or graphics since they do take most of the time in development.

Now let’s say you have your first game ready for publishing. Where can you publish your game?

Becoming a Unity Developer is a dream come true for a lot of programmers. While it can be tricky to become a Unity Developer at first, with the right planning, education, and focus you can make it work. Yes, it requires a lot of practice, but it will help you pursue your dreams while also being able to create outstanding games!

[This article is written by WeeklyHow, an agency dedicated to providing quality guides and tips for becoming a professional Game Developer.]

ProgrammingConsoleDesign
Get daily news, dev blogs, and stories from Game Developer straight to your inbox
Subscribe