How Big Pharma speaks with its systems

The creator of the highly successful medicine-making management sim refrained from making any overt commentary on the pharmaceuticals industry. Instead, he lets his game speak with its systems.
Simon Carless
Blogger
September 28, 2015

There's a lot of money to be made in the pharmaceuticals business. Who knew?

As the creator of the medicine-making management sim Big Pharma lays out in a recent Gamasutra blog post, his game broke even shortly after launching its beta back in May, and has earned back five times its original investment since then. Tim Wicksteed says that it’ll be more than enough to self-fund his next project.

Of course, the takeaway is not just that players want to experiment with how far they can jack up the prices of prescription drugs. Wicksteed thought up the engaging gameplay mechanics well before he added the catchy pharmaceutical angle. But he doesn’t distinguish between the creative decisions involved in development and branding. “Designing something to be highly marketable is all part of creating a ‘good game,’” he says.

Big Pharma began as a a vision of an abstract set of mechanics: a network of machinery connected via winding conveyor belts, moving product one step at a time through assorted equipment in a steady and efficient factory line. Wicksteed, who calls himself the “head honcho” of one-man studio Twice Circled, had spent a year mulling over this core system before the idea for subject matter hit him.

"Wicksteed steered clear of creating narrative-driven ethical dilemmas. He wanted the game to speak with its systems"

“One day in the shower, I had this lightbulb moment when I saw an empty pill packet,” Wicksteed tells me. "I just thought ‘Big Pharma – that'd work.'"

Positech Games (also the developers of Democracy 3 and Gratuitous Space Battles 2) agreed to publish it, and Wicksteed designed and programmed with some freelance help on audio and graphics. He did a small beta launch, deliberately avoiding Steam. He was more interested in player feedback than big early access bucks. “There's a limit on what you can do in three months," he says, "but it's much better to make very targeted changes to a game based on user feedback rather than just guessing what players want and hoping for the best.” 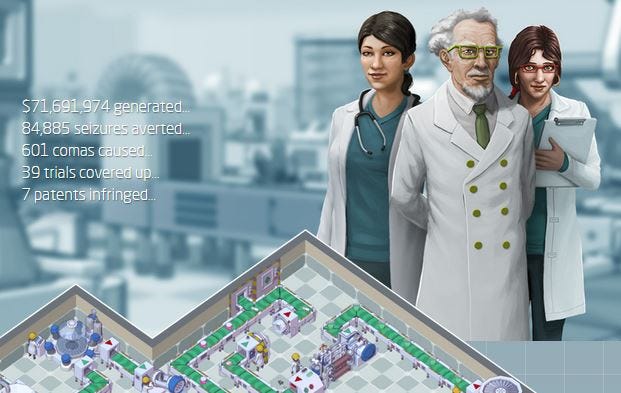 The game managed to recoup during that beta process, and that’s largely due to its solid management sim mechanics. Big Pharma requires players to master the process of transforming core ingredients into practical and profitable medical recipes, balancing side-effects and cures, and unlocking more advanced equipment and materials. You also have to manage the physical production lines, which is a puzzle in itself that requires planning, foresight, and careful color coding to prevent your many processes from blurring into incoherence.

Management sims have grown in popularity over the last few years, partially due to their suitability for smart devices. But Wicksteed also thinks the shift to mobile platforms has left a void in the PC management sim market that Big Pharma fills. 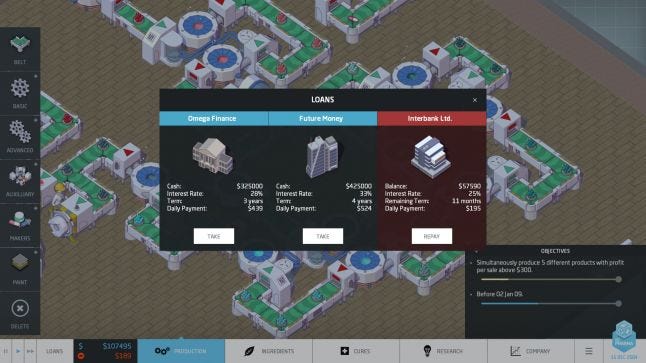 The subject matter is also a vital part of the game’s appeal. “At shows, before even playing the game, people would see the banner, approach me and say ‘Ah I see what you've done there!’”

"If I put the player in the position of the pharma executive and then put them under intense financial pressure, they would soon find themselves forced into making controversial decisions"

It’s a classic management sim with an unusual and morally fraught setting, somewhat in the vein of the recent Prison Architect. The pharmaceutical industry is a massive business that--to say the least--is no stranger to ethical grey areas. Recently, the CEO of an American pharmaceutical company came under fire for raising the price of a life-saving drug by over 5,000 percent – from $13.50 per tablet to $750 per tablet.

Wicksteed steered clear of creating narrative-driven ethical dilemmas. He wanted Big Pharma to speak with its systems, and let players struggle with the scenarios that would naturally emerge. “Any revelations about the industry are very much player-led experiences,” he says. “As you become more familiar with the mechanics, you'll likely start to have increasingly unsettling thoughts such as ‘I won't bother removing that side-effect as it'll make me less money’ or ‘If I wait another year the demand for antimalarials will have risen to a point where I can make a decent profit.’ 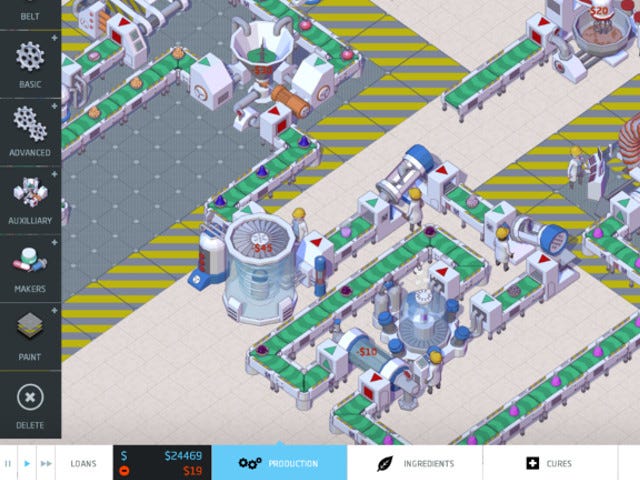 “My idea from the beginning was that if I put the player in the position of the pharma executive and then put them under intense financial pressure, they would soon find themselves forced into making these sorts of controversial decisions.”