Getting Back the Intellectual Property Rights to Your Game
Dan Rogers
Blogger
August 13, 2013
Space Invaders—the video game that effectively set the interactive entertainment industry on fire—turned thirty-five this year.

And thirty-five is a magic number when it comes to copyright termination. Thirty-five is effectively Cinderella’s midnight for hundreds, perhaps thousands, of music, book, film, and video game publishers who believe they have secured the intellectual property rights to another’s work indefinitely.

What may surprise them (and you) is that in 1976 Congress amended Section 203 of the United States Copyright Act, allowing authors of works published after 1978 to reclaim the rights to their creations.  And, in some instances, these rights extend to video games.

… In the case of any work other than a work made for hire, the exclusive or nonexclusive grant of a transfer or license of copyright or of any right under a copyright, executed by the author on or after January 1, 1978, otherwise than by will, is subject to termination under the following conditions….

With proper notice (explained below), individuals and joint video game authors can reclaim their original intellectual property rights, and iconic video game publishers and rights holders may begin scrambling like Halo Banshees as a result.

In the music industry, for example, Tom Petty, Bob Dylan, and Tom Waits have filed termination notices for many of their works. [1] So too have the 70s-80s iconic country rock group the Eagles, [2] Ray Charles, and Charlie Daniels.

So why haven’t we heard about this on the video game front? Probably because we tend to think in terms of nano-seconds rather than decades.

Here's something to think about: in 1978, Japanese publisher Taito Corporation released Tomohiro Nishikado’s Space Invaders, which featured successive rows of alien creatures slowly descending on a lonely gun station. Since then, game players have defended earth against Nishikado’s invasion over three billion times. Asteroids was released in 1979, the year after Space Invaders. Pac-Man came out in 1980. And in 1981, Nintendo’s ubiquitous Mario first walked in two-dimensional space. Equally interesting, video game property published during this era falls within the scope of the termination law.

What does it take to reclaim video game rights? Here's the big-picture list:

Perhaps this illustration will make the above more clear:

Fast forward to present day. Sam and Sally used their Crazy Adventure royalties to buy the laundry that they both still work at. Retirement is but a pipe dream.

Then Sally stumbles on this little known law while reading a copy of the recently revived Byte Magazine (her favorite, by the way), and she calls an attorney using her still-working 1200-baud modem, wondering if copyright termination applies to Crazy Adventure.

The attorney explains that since Sam and Sally were clearly not employees of Big Publisher when they signed their original agreement, and because they never signed a work made for hire provision, then Section 203 applies, provided they both agree to terminate Big Publisher’s rights, since they are joint authors. Unfortunately, they don't have termination rights to the derivatives: Crazy Adventure 2 and Crazy Adventure, On Steroids

Sam pulls out his handy-dandy scientific calculator, the one he still carries in a holster on his belt, and calculates that because their game was published in 1980, he and Sally have until 2020 to terminate Big Publisher’s rights. The last date of notice is 2018—still plenty of time—but their rights can revert as soon as 2015, which means they can give notice now.

Sam and Sally leap for joy, not knowing that a fight will likely ensure.

If other creative industries are any indication, then video game publishers aren’t going to give in easily. Music publishers, as an example, have been making some fairly creative legal arguments that delay the process, but hopefully won't change the inevitable. After all, the law is valid, and the rights of legitimate authors can be enforced. 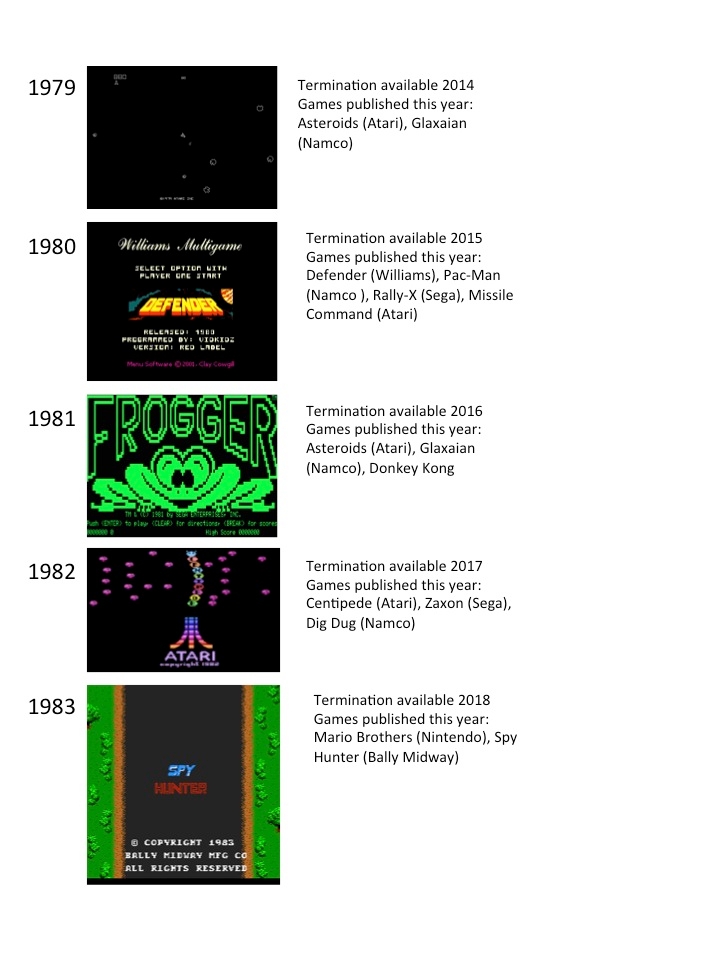 The games in illustration 1 give you a good idea of what properties were in play 35+ years ago. This isn't to suggest that the rights to these specific games can be terminated, and my guess is that many were created by in-house teams—thus work created by employees within the scope of their employment. But other games created during these years were no doubt created by outside, independent developers, and these rights could very well  be subject to Section 203.