GAME: In UK and Spain, Switch attach rates are matching the Wii's

The company claims that -- at least in its stores across the UK and Spain -- the Switch is rivaling the Wii in terms of attach rate, with GAME selling an average of 3 Switch games for every 1 console.
Alex Wawro
Blogger
November 17, 2017

UK retailer GAME made its full-year earnings report to investors today, and while revenues and profits were down year-over-year, the company forecast a holiday sales surge driven by Nintendo's popular Switch console.

Notably, the company claims that -- at least in its retail locations across the UK and Spain -- the Switch is rivaling the Wii in terms of attach rate, with GAME reporting that it sells an average of 3 Switch games for every 1 Switch console.

According to the company's report, that 3-to-1 attach rate for the first ~9 months of the Switch's lifespan nearly matches what GAME saw with the Wii, which averaged a 3.1 game-to-console attach rate during the same period.

Of course, GAME is not privy to sales data from Nintendo's own digital game storefront; if it were, that attach rate (see excerpt below) would presumably be at least a smidge higher. 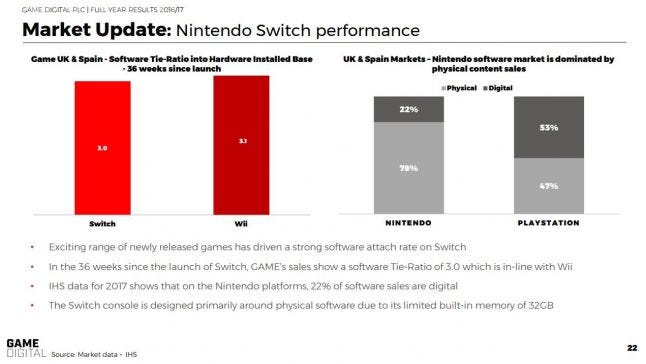