Game Dev Tycoon launched on iOS. This is a day-1 report on how the release went, including sales numbers, observed piracy rates, reactions from press and players and an overview of what issues we faced and how we tried to reach our audience.
Patrick Klug
Blogger
December 01, 2017

This post originally appeared on the Greenheart Games blog, it was cross-posted here after we were approached by Gamasutra.

We decided before the release that we would try to share sales data with the public after checking that this is allowed with our contact at Apple. This is in part so that other developers have more data to make decisions on, and also gives us a chance to talk more about the release, instead of only re-sharing positive coverage.

Here’s the data from our release day (one day delayed because of how the data is collected).
(For Android players: Release on Android is scheduled for January!)

We did not repeat our piracy experiment because I don’t think we are legally allowed to publish an iOS game outside of the App Store, even if it were a joke version. Looking at our data however, and seeing that the actual users are in fact lower than the purchases, suggests that there is a piracy rate of 0%, which would be incredible.

Players had a great time playing the game. On release day we got 86 ratings with a total rating of 4.8 stars, or as Game Dev Tycoon would say 10, 10, 10, 9 (thanks, All Games 😉). Seriously though, the only visible low rating was due to an issue where the game can crash on iPhone X – fair enough and sorry, we are investigating (if you have that issue, please try to logout of Game Center and then back in again or get in touch with us via email).

The press also gave us great reviews, here is the 5-star review from Toucharcade:


It’s the perfect sort of game for mobile devices and there’s so much to do here […] all players owe it to themselves to check out this great port.

We couldn't have hoped for a better reception. Thanks players and press! You are amazing 💚

1,463 copies in 24 hours is pretty good for a first game on a platform but if you take into account our audience and if we compare this data to other platforms and to the amount of copies we have to sell to break even on the mobile version, it becomes more sobering.

Even on the Windows 8 Store, back in 2011 when we had an audience reach of zero and very few people had Windows 8 (and even fewer wanted to have anything to do with the Store app on it), we sold around 450 copies on day one. Given the massive reach of iOS, the much lower price ($4.99) and given that we (tried) to reach our audience we certainly hoped for a better launch day. 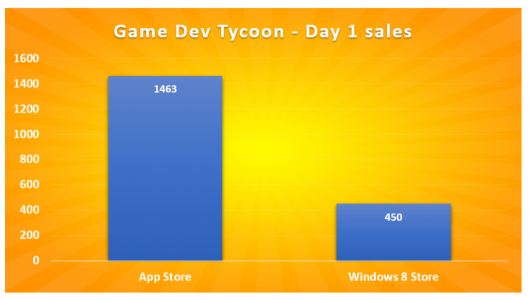 To give another comparison, when the game launched on Steam we sold substantially more on day one. 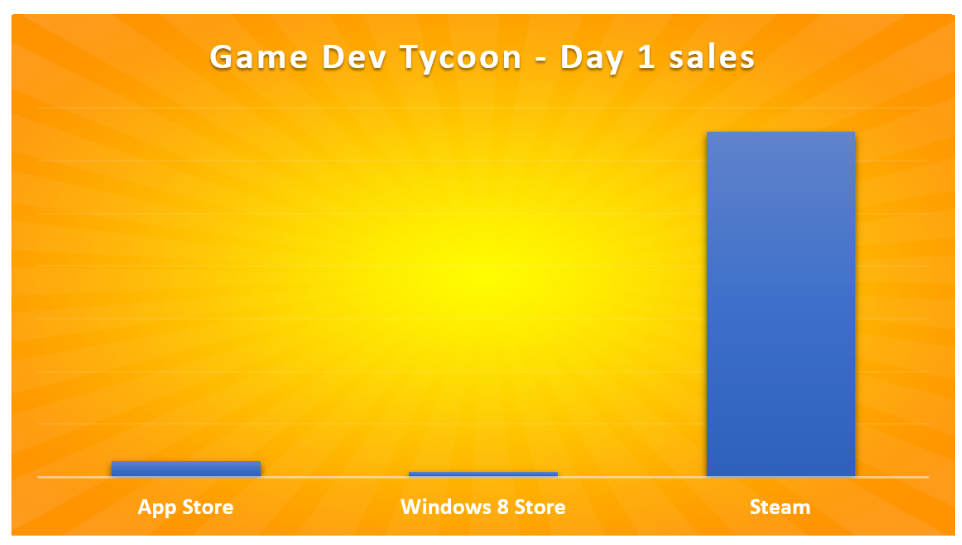 The reason Steam was such a strong release for us was primarily because Steam had us featured on the front page. After the piracy story went viral in early 2012 and we had all the attention of the world (it felt like it anyway) we didn't actually do the smart business thing and rush the game on Steam but instead disappeared for over three months to polish the game based on feedback we’d received from our players. Quality-wise this was an important decision. Our initial release has a Metacritic rating of 68%, but after the changes we made for the Steam release, we got a 95% user approval rating from Steam players. If Steam hadn't featured us at launch though, I don’t think we would have reached the critical mass that makes word-of-mouth effective… bringing me to the next point: marketing.

Marketing (or how we failed to reach most of our audience)

We suspected that Apple would not feature us on day one, so we set our goal to try to rally our audience behind the release on launch day to get the first important positive boost. Part of the reason we were confident to invest into a good Game Dev Tycoon port (Rarebyte, our development partner, spent over a year creating the port), was that we have a larger audience than the usual indie game studio.

We have a decent following on Facebook (GreenheartGames 7K, Game Dev Tycoon 13K , TavernKeeper 1.6K) and Twitter (Greenheart Games 8.4K, Tavern Keeper 2.1K) but our real star is our newsletter which has a staggering 145,714 recipients. 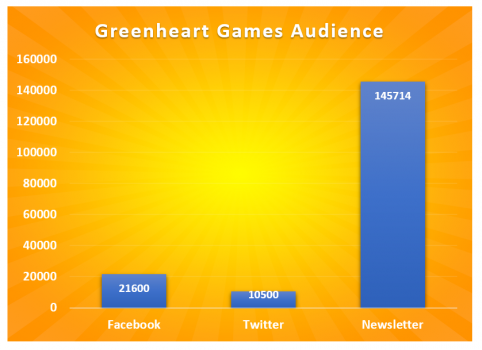 What’s more is that the vast majority of these recipients bought Game Dev Tycoon in the past and are simulation game fans. We treat our newsletter with a lot of respect and only use it when we have big news, sometimes going nearly 600 days without sending something as we really don’t want to inconvenience people. This has worked really well for us in the past as the few times we do actually send a newsletter, we reach a open rate of nearly 40% (industry standard: 20.82%).

Our thinking thus was simple: Make a good port that also offers something new and write a straightforward and nicely formatted email bringing people directly to the iOS store.

We sent the newsletter out in time for the US mainland to see. Sadly though, the result over the next 24 hours was underwhelming: an open rate of 13% and a click rate (on the image or link to the App Store) of 2.41% which is both well below the industry standard. This means that on launch day from our 145K-strong newsletter readership, only 3,509 people clicked on the link. I’m not sure what the cause of this low rating was but people live busy lives and we are not entitled to their time! We will simply try to reach our audience again in the next few days.

Unfortunately, for many of those people who did click the link, the link didn’t seem to work and they couldn’t find the game in the App Store.

Apple says that it can take up to 24 hours for the Store to be updated and show new releases. They are not kidding. We sent our newsletter out six hours after the game release (after we had tested the game link extensively among the team and our friends) but even 18 hours after release people were still saying that the link resolved to nothing. Game Dev Tycoon was also not showing up in search results and we were simply not visible in the Store for the clear majority of the day. This was rather stressful and unexpected. We certainly would consider a soft launch next time we release something on the App Store.

To try to increase our initial reach we ran a thunderclap campaign (thanks for everyone who signed up) and we were happy with the result but should probably have pushed this more and earlier.

Our announcements (Twitter, Facebook) did reasonably well too but the sad fact of the matter is that the followers you have on social media are largely unreachable unless you spend heavily on advertising.

Reaching people on the internet. pic.twitter.com/dneGM14Cyl

Reluctantly, spending a bit on advertising is what we tried next, just to give us a first boost and reach our existing followers but both Facebook and Twitter refused to take our money. Facebook apparently doesn’t allow boosting of posts that link to the App Store: 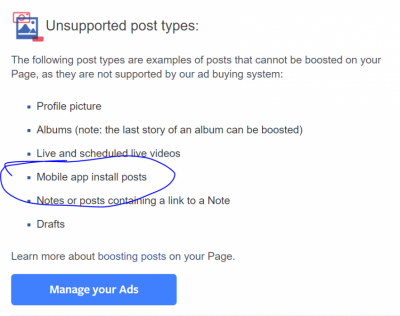 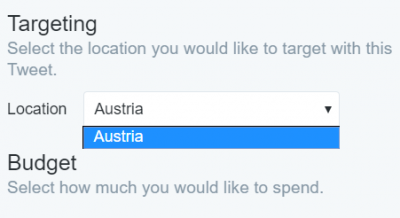 and then, when I found a specific App Store promotion option, simply refused to accept the link as valid (just as many other users had reported, the link didn’t work for them): 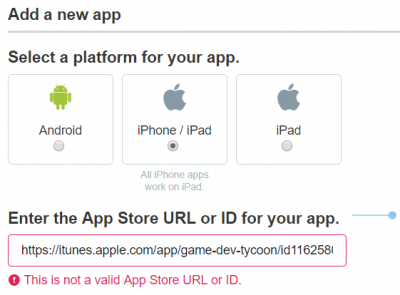 Regardless, we couldn’t afford to invest much in social media boosts anyway. The game is only $4.99 and has no further monetization (no ads, no in-app purchases) and given that Apple still takes a cut, I suspect there is not much point in paying $2+ to get someone to install the game. (We are running a trial on Facebook though, so we’ll see what those results will be next week).

During the end of the first day, we did show up in Top Paid games’ charts across the world which, given the sales numbers, was surprising. In the US we made spot 42 under Top Paid and in many ‘Strategy’ lists we were in the Top 20.

If you are wondering what Rank 42 in Top Paid relates to in Top Grossing category, the answer is apparently Rank 1,560+ which, together with our earnings from our first day, just highlights how steep the Top charts on the App Store fall. I suspect for premium games, if you are not in the Top 30, you are not very profitable (though this is all based on App Annie rather than data from Apple so take it with a grain of salt).

Release day is always stressful and exciting at the same time. On one hand you are faced with unexpected technical issues and simply a lot of unknowns, all of which is emotionally draining. On the other hand, you get to see first reactions and wonderful people share their experiences and enjoy the launch with you. As developers, we spend years behind the screen working quietly on our games with almost no input from anyone so it’s really fantastic to then see so much joy from players.

On the business side, we will have to wait and see. The mobile game cost us around 190K USD because, well, the game is much larger than you might think and we really wanted to make a good port. Naturally, we need to sell a lot more copies before this becomes profitable but we are not entitled to profitability, nor success. It’s only the first day and hopefully now that the link works and our game is visible, things will pick up a bit. Meanwhile we are addressing all known issues and hope for a potential feature from Apple (which we are also not entitled to, of course). Our biggest chance to success is, quite simply, you. If you think you could like our game, please check it out: 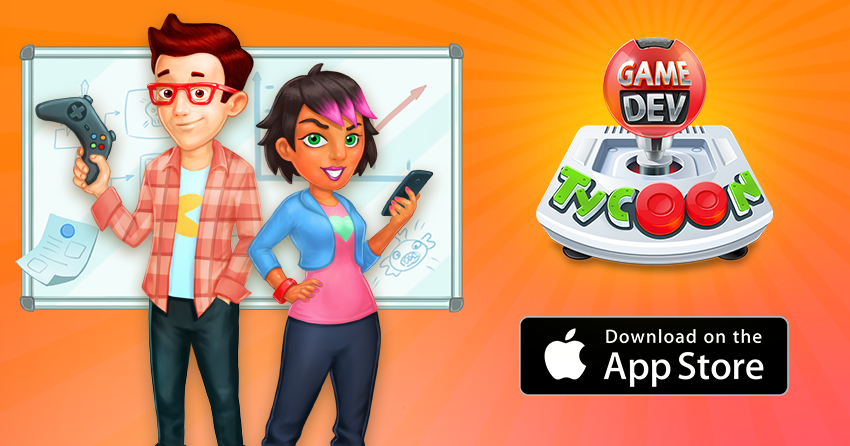 And if you enjoy the game, leave a positive rating or consider helping in other simple ways 💚.

PS: To read future analysis and a planned post-mortem, consider signing up to our newsletter.

Thanks for following our story!

Part 2 of our report is available here.