First-party releases are driving sales and operating income at Sony

First-party releases are driving sales and operating income within Sony's video game division, according to the company's fiscal report for the second quarter ended September 30, 2020.

The PlayStation maker explained that upswing was "primarily due to an increase in software revenue," and noted that first-party software like Ghosts of Tsushima had been performing particularly well.

Sony also noted that its network services, including PlayStation Plus, had attracted more subscribers due to the "stay-at-home demand" imposed by the COVID-19 pandemic. As the table pictured below shows, the number of PS Plus subscribers rose to 45.9 million, which is significantly more than the 36.9 million subscribers the service boasted in Q2 2019.

"Although it has leveled off compared with its peak in April, stay-at-home demand, which drove sales and profit in this segment in the first half of the fiscal year, continued to have a positive impact, with total PlayStation user game play time in September up approximately 30% compared to the same month of the previous year," explained the company.

Looking ahead, Sony is predicting a strong launch for the PS5. It explained the system is in "great shape" to succeed due to an "appealing software lineup, the strength of the PlayStation brand, our pre-eminent game ecosystem and our cohesive gamer community."

With that in mind, it is expecting PS5 sales to exceed the 7.6 million sales amassed by the PS4 in the fiscal year it launched, adding its overriding strategy is to "grow sales and profit through increased user engagement driven by great game experiences on the PS5." 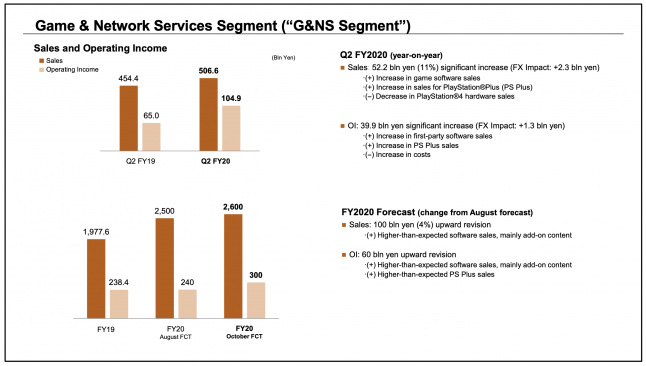