Fire Emblem Heroes had a large success in Japan and the US. I'd like to explain the analysis of game design and monetization of the mobile game, the relationship between battle system and growth and monetization.
Motoi Okamoto
Blogger
February 10, 2017

(I initially posted this article in my blog LEAP TO THE FUTURE. )

Fire Emblem Heroes has been out since February 2 and has achieved great success, especially in Japan and the United States. The latest mobile game Nintendo released was ranked 3rd on Japan’s iOS top-grossing apps and 8th on America's iOS top-grossing chart. The game earned $2.9 million on the first day, and has kept a top 3 ranking alongside mixi's Monster Strike and Sony's Fate / Grand Order. 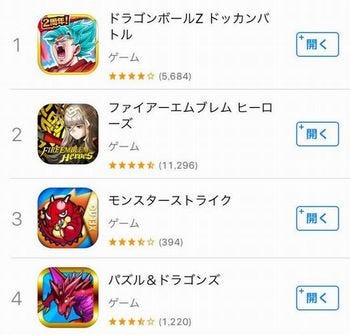 The spectacular success in Japan is also because of good release timing. Japanese mobile publishers tend to be heavy earners with events and Gacha at the year-end and New Year holidays, and so they tend to see weakened sales at the beginning of February. For many core gamers who are playing other smartphone RPGs, FEH was a worthwhile game with which to spend a bit of time.

Okay, let me explain the analysis of design and monetization of Fire Emblem Heroes.

This game is a downsized strategy RPG, applying strategic battle in a 4 vs. 4 skirmish on a single screen (later, enemies will increase over four). In a traditional SRPG, you should move your unit closer to the enemies' side and select an enemy to attack, but in this game you simply slide your unit on an enemy, and then it performs a move and attack. The story demo before and after battle is very short, but you can see many of the series' most popular characters in the game. 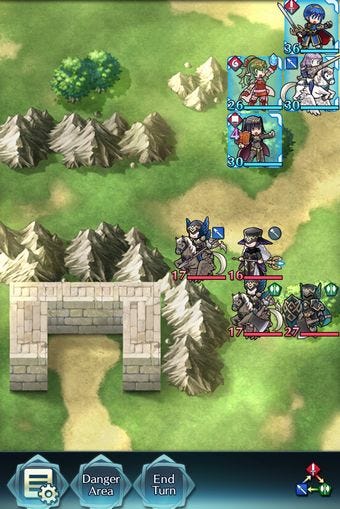 The simple battle field in the Fire Emblem Heroes.

Watching many reactions of users, FE's enthusiastic fans are slightly disappointed in the gameplay and quality of the mobile version, which is much simpler than the console version. The flow of the tutorial is too simple to understand, the UI is sloppy, the story is thin, the depiction of the characters is coarse and the strategy of battle is also low, and so on.

On the other hand, when viewed as a mobile game, it is easy to play in little breaks. Due to the reduction of the number of units that can join a battle, and the shrinking of the map, a battle can last as little as 3 minutes instead of a battle that took 30 minutes.

Of couse, you can enjoy and collect and raise many characters of the FE series.

You can summon heroes from past series using orbs (you purchase them with real money or proceed chapters in story maps to get an orb as a reward) . This is so-called gacha.

A hero appears fascinatingly in a gacha sequence.

Nintendo and DeNA are showing some ingenuity in the game's gacha system:

That means it is a better value to consume 20 orbs in total and turn it 5 times. 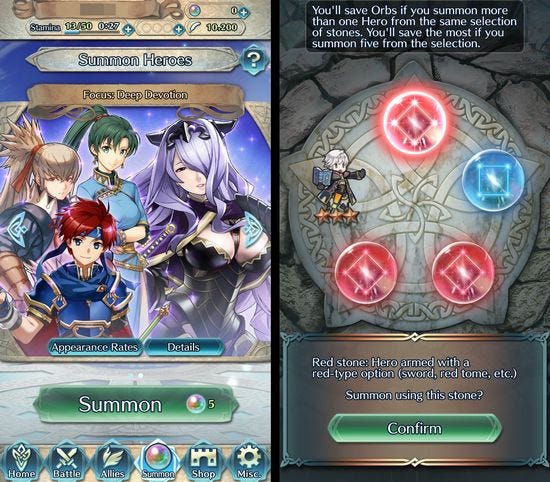 It is obviously better to consume 20 orbs in total and roll Gacha five times. In fact, according to the orb's sales ranking on iTunes, "23 orbs" is ranked 2nd. This confirms that this monetization strategy has success.

And one more thing, I guess that there are mainly two types of paying users, an OVER-PAYING gamer accustomed to gacha at other smartphone RPGs and a light-paying gamer who considers 5 consecutive gachas is a better deal. The latter may be a Nintendo freak who has never paid money to gacha before.

Unlike in the past series, there is no evasion in the game. No element related to luck, prediction is easier and the game is closer to a chess game. Spd (Speed) isn't related to evasion. If your unit's speed is more than 5 of your opponent, then your hero will attack twice against the opponent.

Following the tradition of the FE series, the damage calculation is simple. The damage of physical attack is the value which subtracted his defense force (Def) from the enemy's attack (Atk). Magical Attack Damage is the value of your enemy's attack power (Atk) minus your resistance (Res).

In other words, if your ATK is low, or the enemy's DEF (or RES) is high, the damage given can be zero.

Such addition and subtraction formulas are common in console RPGs in which developers can easily assume character growth curves. When the player's fighting power deviates even slightly from the assumption of the developer, the difficulty rises sharply.

That formula is unusual in a smartphone RPG, because each player gets characters from gacha, and their parameters vary. For smartphone RPGs, the calculation formula is based on the reduction rate such as damage = (100 - def) * attack  is more general.

As mentioned above, the unit's Atk, Def (or Res) are very important, so players are more likely to feel the necessity for unit growth than other mobile RPGs. The strong emotion should be called as "Growth Pressure".

Also, Exp (experience values) are not equally distributed to all teams who participated in the battle, and only attacking units gain Exp. Then, if the unit dies, Exp it earned in that battle will be zero. Even if the unit attacks a lower-level enemy than the unit, gained Exp is lower. There is no easy way to earn Exp safely and efficiently in the battle . All players have to face always a trade-off between risk and return in the process of growing a hero.

In other ways, you can "Level Up" your unit, consuming shards. But accumulating shards needs much time and the many battles in Training Tower. In this way, the growth pressure of this game is very strong.

Perhaps designers followed only the traditions of the series, but this produces a strong motivation to strengthen the units. Normally, if the game is not Fire Emblem, mobile gamers might feel unreasonable and uncomfortable with the difficulty of the battle system, but the FE fans agree with all of them.

There is another way to get a high-rarity unit. Players can "Unlock Potential", consuming Hero Feathers and Badges (Great Badges) to raise up the unit's rarity and strengthen the unit's parameters.

Isn't it necessary to roll a gacha?

No, it's not that simple. Nintendo and DeNA built a clever design.

To get feathers, players should win the other player's team in Arena. If you want to get a large number of feathers efficiently, you need to win successively with minimizing the loss of the four-unit team. To get badges, you should beat battles in Training Tower. 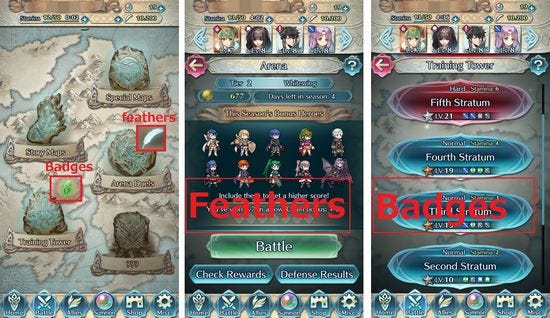 To get feathers, go to Arena. To get Badges, go to Training Tower.

It takes a lot of time. Players who pursue efficiency want a stronger team. In other words, players will eventually desire a high-rarity hero by rolling a gacha. Even if you are trying to avoid a gacha, eventually you will want to roll a gacha someday.

Thank you for reading so far. I hope this article gives you valuable insights. Ask me in the comments If you have questions about this article.

The all screenshots are taken while I play the game.
© 2017 Nintendo / INTELLIGENT SYSTEMS