I'm about to touch on a somewhat controversial and unpopular subject within the game-dev world: listening to your players. But I'm doing just that and it's turning out into a very popular game with high approval ratings
Justin Popa
Blogger
November 25, 2019

I'm about to touch on a somewhat controversial and unpopular subject within the game-dev world: listening to your players. Developers, both AAA and Indie are very reluctant to do this for several reasons:

Yet I've been doing exactly this since April, and the results are quite the opposite of the general opinion. With a game sitting at a 95% approval rating and which has been featured on the steam Free to Play hub under New and Trending, I'm very much in a position to completely rebuke the above claim. Here's what I've noticed:

Gamers do know what they want!

Shocking, I know, but this is a very dismissive point of view from the get-go. Yes, you are the developer and it is your baby but you are going up against individuals that have potentially played your game for longer than you have been developing it. I'm okay at my own game, but I couldn't even dream of having the skill some of my top players have. Those individuals have played hours at a time! They know every kink, every exploit, every mechanic they can user and/or abuse, DO NOT IGNORE THEM! You might disagree with them, and that's fine, but don't just outright ignore them as they have some valuable input and insight you couldn't dream of having, because you're too busy building the damn thing!

"But my top players will only be concerned with late-game aspects. What about the rest of them?"

They are not, and they are not the only ones trying to grab your attention either. You will get beginner players sharing their problems with you quite often if you give them a platform to do so. Most of you now have a discord server, how about including these three channels: #features #feedback and #bugs, then let people fill them out and just direct them to write their problems there. You will get plenty of people complaining outside those official channels, that's fine answer them on their platform of choice and always end your answer with a suggestion to join the discord server where they can contact you directly with feedback, features and bugs.

You can't make everyone happy, but you can make them vote

Color-picker or music-driven colour changes? Electronic music or Heavy Metal? Arcady or Simulation? You truly can't have everything, but you sure as hell can have a compromise.

When two opinions clash, you can stick yourself in the middle and be the decider which will potentially make you very unpopular if you make the wrong choice, or you can have a vote. A fourth channel on my server is called #polls, and boy is it useful: 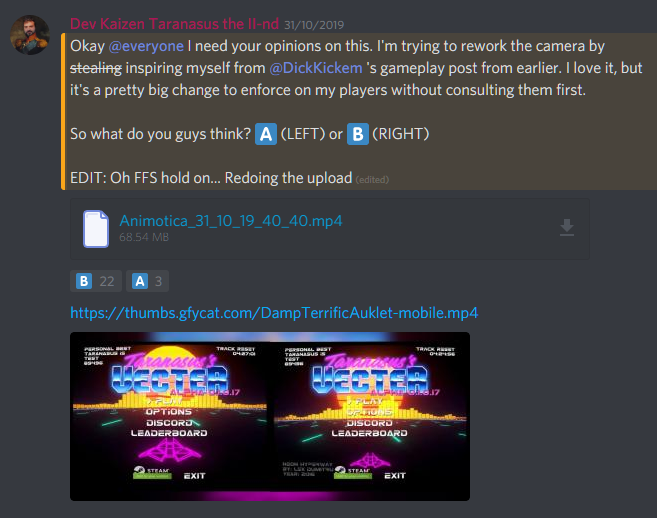 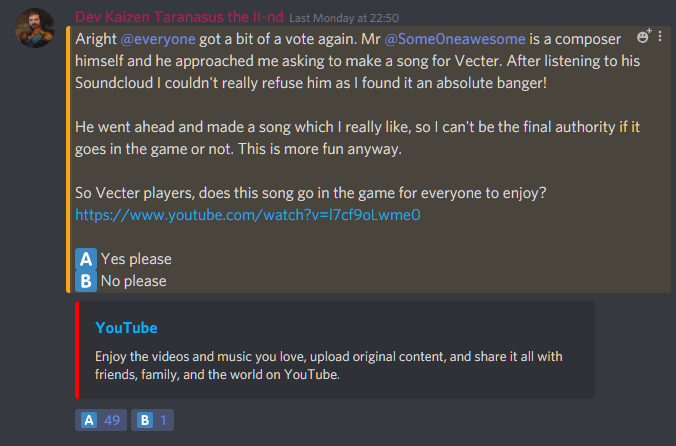 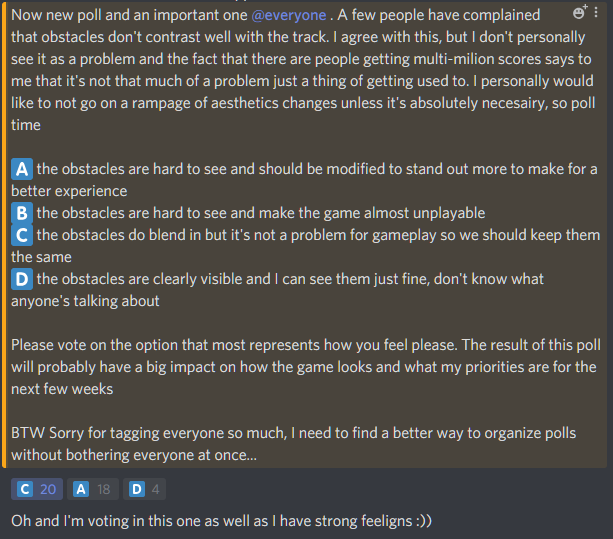 Take the difficult decisions out of your hands and let your community decide for you what's best. "But if you do that then..

...your game will lose its identity and uniqueness"

Will it? People came to you because they liked what they saw, to begin with, why would they want to change the essence? Yes, you will have the random troll saying "Make it more like COD" or some nonsense but those are easy to spot and ignore. And say you want to take on board every single stupid request, once you put it in a poll you will know exactly what the majority of people want, and the majority of people on your discord don't want another COD, they want your creation, but better!

It's not your decision to make. If someone willingly came over to you and told you "you should do this because it'd be better", they are telling you this because they want to have a better experience and they also want to feel a part of the development process. The charitability of their actions is not really a concern for them since they just want to better enjoy your creation. You have the difficult task of implementing the change, so it ends up being a semi-equal exchange.

I can't listen and answer every one, when will I have time to develop my game?

I currently have around 800 daily players for my game and about 300 discord members of which 20-30 are extremely active on the server. I can easily keep on top of the situation by spending 1 hour per day answering questions on discord, steam community hub and twitter. If you have so many requests that it would eat up the whole of your day, you are definitely big enough that you should consider a community manager. Sometimes I may need to spend more time, sometimes it's quiet and I don't have to say a thing, but it's by no means overwhelming.

I know it's difficult to take criticism, trust me I know. I once tried to make the menu more visible by adding some black backgrounds to the buttons and someone literally said:

Yeah... it hurt, but looking back on it they had a point. I removed it a few minutes later and everything was fine. However here's what they have to say because I'm so responsive and accepting of feedback: 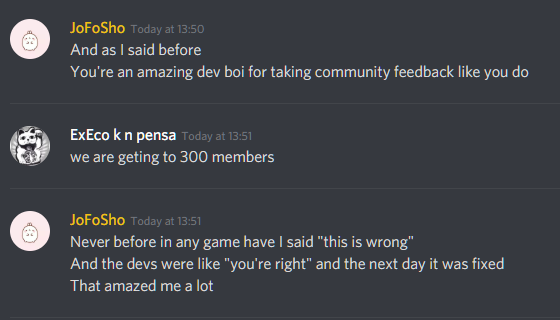 So give your community a voice. They might surprise you!

And if you're still not convinced, maybe come see the thing for yourselves: https://www.vecter.online/discord

Also this is the game, if anyone's interested: https://store.steampowered.com/app/1175140/Vecter/