I'm an indie developer making games while still in college. I launched my website 16 weeks ago to document how I do things so someone else can learn from my mistakes and triumphs. This is how I'm doing so far.
Tony Yotes
Blogger
December 12, 2013 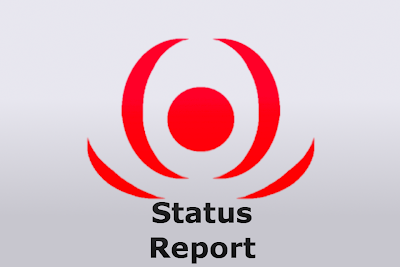 Time for another status report and almost nothing got done. School has reached a climax in terms of workload and there is no way DragCore is coming out by Christmas. In fact, I'm thinking mid-January at the earliest. Maybe then I'll get people looking to play new free games on their shiny new smartphones and tablets.

I'm going to start posting revenue and download data on these status Reports from now on too, straight from App Annie. It should help show you what to expect if you go about selling games the way I do. I can tell you now that I'm making nothing, but one day that'll change and you'll be able to see the revenue spike along with me. Take a look at a weeks worth of work.

I got an email from Samsung asking for me to put TriGrid on the Samsung Seller Office. They have a campaign going on where they help promote indie games and I want to be a part of it. I'd look deep into it and have more to say, but I'm swamped in schoolwork and haven't had time to register accounts get my apps on Samsung. Everything will go a lot smoother when finals week is over. 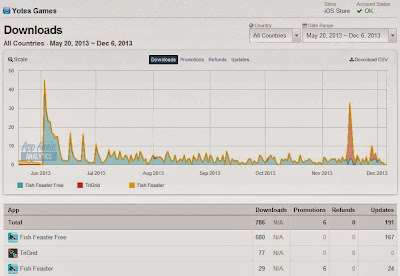 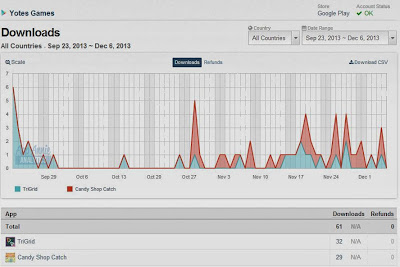 Fish Feaster Free nearly reached 700 downloads since May which isn't much but is the biggest thing I have because it's been out the longest. Those big spikes you see come from new game launches where I got friends and family to download and rate my games. My iOS games are seeing a lot bigger numbers due to my greater popularity there. Fish Feaster Free has the biggest install base and TriGrid was featured once.

It's good to see even just a couple extra downloads each day because to me, that means somebody, somewhere thought to give m game a try. Hopefully, they had fun with it. The only way to tell is to get reviews, but people seem to not want to bother with that. That's why I'm looking into review prompts to pop up at set times in my future games. 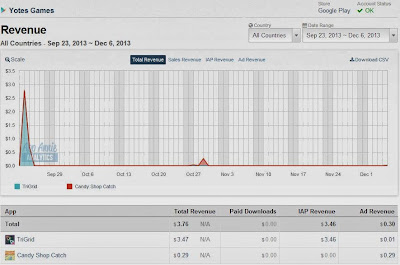 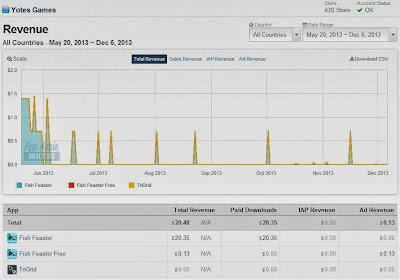 Not much to see here, but that's what happens when you're an unknown developer with no budget doing soft launches (A.K.A. Bad Idea). My future games will have more fanfare however. With the game after DragCore, I plan to stall it's release as I practice spreading a press kit around for a few months. I really want DragCore out in January to get some of the aftermath of the holiday rush.

I didn't put ads into Fish Feaster Free until recently, so I missed out on a lot of big spikes in revenue. Altogether though, I'm not missing much. 700 ads would likely only get me dollar or so. Money was not the primary goal for my early games though. I'm still trying to establish a presence. I need to make a name for myself in the app store. I need a game out there to point to and get people's attention.

I even released TriGrid without ads or in-app purchasing (which I couldn't get to work) just to have a really fun game on the app store for people to see. I want people to associate the Yotes symbol with a good time. I'm just glad that thanks to those early games of mine, I know how to make apps. Now it's time to learn how to sell them.

They all look like this right about now. TriGrid was ranked in the top 150 in multiple countries for two weeks after launch, but then died out. I even saw it reach the top 50 in some places. I'm hoping to boost it's attention again with the new update that has a few fixed bugs and a more attractive app icon. I'm not expecting anything in return however. It is there just to boost my reputation after all.

Nothing else has ever been featured and I'm steadily getting about 2 downloads a day on both platforms (and that's all my games combined).  I hope with a new polished title with a stronger launch releasing on both platforms at once will rocket me into a thousand downloads. I'll have to work a bit more to live up to that. 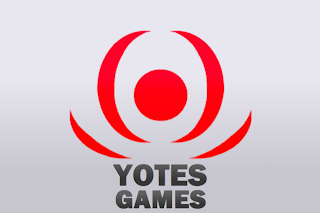 Keeping this site going and evolving it brings a smile to my face. I'm hard at work making this site a great place to be. The kind of blog I would be glued to and check obsessively. Daily updates, intuitive interface, and colorful design. This place has changed a lot since August and I'm going to keep evolving it. I want you do be there when I grow from the novice I am today into a developer creating hits on the app store. Keep checking back here and you'll see for yourself.