The gambling/gaming industry needs a completely new model in order to meet Millennials where and how they like to to play.
Adam Sellke
Blogger
May 12, 2016

This article originally appeared in CalvinAyre.com on 5/11/2016

The conventional thinking on “Millennial gambling” seems to go a little like this: “Millennials still like to gamble... We just need to make casinos more like video arcades.”

Millennials, by and large, are not gamblers. And they never will be. The traditional neuroeconomics that tickle the pleasure centers of the brain to make gambling “work” for most people just don’t seem to apply. And while it is unclear whether this is happening on an evolutionary or a conditioned response basis, it is reflected in an undeniable generational shift in entertainment and engagement modalities. Just look at Snapchat, Twitch, banner ad blindness, and Bernie Sanders... or check out the chart below for more evidence of what I’m getting at: 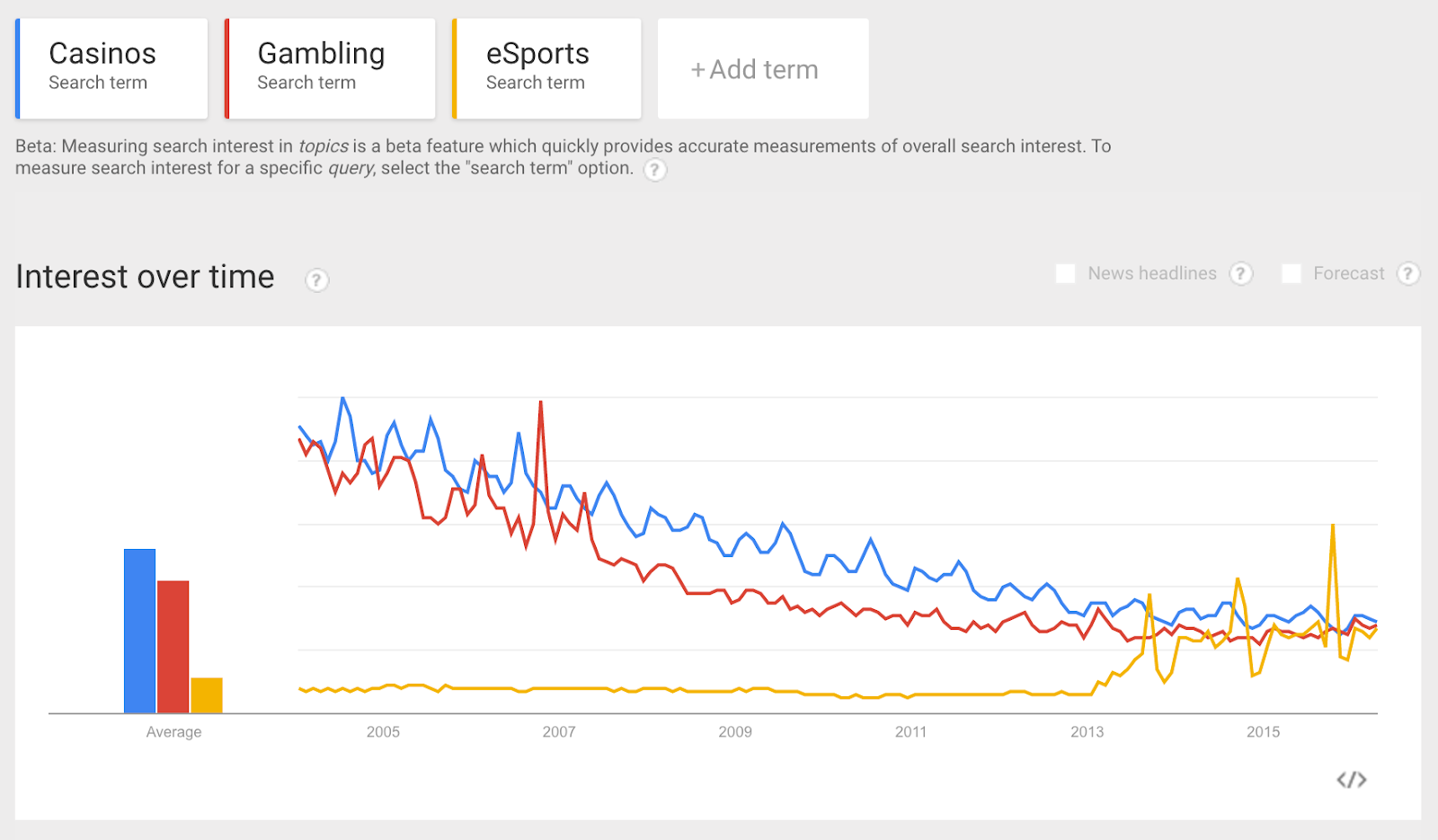 In addition to dwindling interest, gambling revenues have also declined. In the 1990s, 58 percent of a Las Vegas resorts' revenue came from gambling. In 2014 it was just 37 percent1. What is needed is a new model for entertainment and engagement that is predicated on what Millennials value and how they interact with the world. I would argue that “Millennial gambling” isn’t about gambling at all. It’s also not about casinos. It's about eSports, or more specifically, skill-based competition.

Millennials are now the largest living generation in the US2. Consider this fairly typical list of their values3:

To anyone familiar with video games and the emerging popularity of eSports, or electronic sports, you might notice a striking alignment:

Instant Gratification & Recognition - Nothing beats the instant gratification and recognition associated with eSports. One might think that the same holds true for traditional casino gaming, however eSports offer a multitude of compelling ways to showcase one’s achievements via channels like live streams, social media updates, player profiles and leaderboards. With eSports, your performance could reach a global audience of millions as a top player; or a small circle of your best friends. Either way, these mechanisms offer a far more impactful form of recognition than from a handful of random strangers standing around a craps table.

Balance & Flexibility - Being able to play what you want whenever and wherever you want is a huge advantage in eSports. All you need is a reliable Internet connection. No casino required. Plus players are able to play the games they know and love and not an approximation of their favorite AAA titles in the middle of some casino floor.

Collaboration - In a casino, “collaboration” is seriously frowned upon. In fact, it’s considered cheating4. In eSports, you can play as part of a team and it’s the work of the team that determines your level of success. In eSports, not only is that ok, it’s often the whole point.

This is where I also draw a distinction between direct, competitive play and eSports-related gambling and Daily Fantasy Sports. For the purposes of this article, I am focusing solely on the former. Those topics are for another article. Now back to regular programming...

Transparency - This is a big one. If there’s one thing Millennials insist upon, it is transparency. And not only do Millennials want to know how the sausage gets made, but they want to ensure that the pig is been treated “fairly.” eSports can be defined simply as any video game that can be played competitively, where a common set of rules apply equally to all participants on a “reasonably level” playing field. In other words, eSports are transparent and fair. They are games of skill, not chance. May the best player win.  Now contrast that environment with a video slot machine or any other casino game where the “house always wins,” and you can see why Millennials are saying “no thanks.”

Advancement - Like a Millennial dream job, advancement in eSports is a meritocracy. Success in eSports demonstrates mastery, whereas success in gambling demonstrates luck. The fact that advancement is a proportionate, self-deterministic outcome in eSports makes it particularly compelling over gambling. Plus, eSports-playing Millennials can advance to the level that’s right for them (whether it’s competing for a share of the multi-million dollar prize pool in DOTA2’s World Championships, The International; or playing for “pride and pizza money” on Evolve Labs’ casual competitive arena for Rocket League, Rocketeer). eSports’ flexible, but transparent paths are important factors when it comes to Millennial adoption and retention. Whenever large, powerful, established industries face disruption, there is a tendency for them to follow an all too common pattern: they attempt to ignore, kill, or control the disruptive forces in their midst. The results are often devastating. Casino operators need only look to the music industry as a cautionary tale: 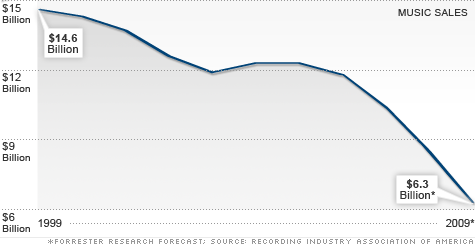 Ignore - Coming off the massive success of the audio CD format of the 80s and early 90s, the industry was keen to keep a good thing going. When digital audio first started making the rounds as MP3 and other media files, the industry responded with a collective yawn. After all, sound quality wasn’t technically as good as the then state-of-the-art compact disc and creating and playing the music required a lot of technical savvy.

Kill - Then the Internet caught its stride and began delivering just enough bandwidth to easily circulate and play these files, eventually leading to a service infamously known as Napster in 19995. Rather than figure out how to adapt to these new, flexible, open technologies, they unleashed hundreds of angry lawsuits against budding businesses and customers alike in an effort to squash the advancement of what was now clearly a competitive threat.

Control - Recognizing that the genie was definitely out of the bottle, the recording industry clumsily tried to shoehorn what they knew and what they wanted to maintain using things like DRM, proprietary players and formats, and other tactics, rather than trying to embrace and extend the value these disruptors were creating. That is, until Apple eventually showed them how to make money in digital music with its launch of iTunes, which sold 500 million songs in its first two years6. The industry had been changed forever, and the large, slow, and dumb incumbents took a drubbing. Many are gone and some, 20 years later, are only now showing signs of recovery.

The lesson here is that change happens. And that you can’t ignore, kill, or control it. The inevitable trend is toward instant gratification and recognition; balance and flexibility; collaboration; transparency; and advancement. Millennials have already taught us this before with music. And they’re telling the gambling world the same thing again. Rather than suing innovators, or attempting to create legislative barriers7, or dropping buckets of money8 morphing casino tables and slots into mobile apps and video arcades of chance, operators should embrace eSports and run with it—as sport. Hosting major eSporting events is a start. Like a heavyweight prizefight, these will draw crowds and generate traffic. Side-betting on these games are also a natural fit. But the direct analogies of “do x, but with video games” quickly drop off from there. Shifting to an adjacency or an altogether different model is probably necessary. It’s time to get creative. Act now, but take the right action: because missing the underlying drivers of Millennial behavior will only serve to undermine your objectives and further alienate your biggest potential customers—costing you billions. Get it right, and you’ll be around for Generation Z.

Adam Sellke is founder and CEO of Evolve Labs, maker of platforms and products that help gamers connect, coordinate, and play the video games they love with their friends online. Adam is too old to be a Millennial, but young enough to know better.