In a half-century of game development, a number of triple-A developers have gone on to form independent game studios. One such studio made a noticeable mark on the video game world with the release of Mario Kart Live: Home Circuit, a mixed reality title that brought Nintendo’s Mario Kart to the real world.

But despite the Mario Kart moniker on the box, the game didn’t come directly from Nintendo. Rather it was developed by Velan Studios, which was co-founded by Guha and Karthik Bala (who’d previously founded Vicarious Visions).

At GDC Showcase this week, the Bala brothers gave a talk discussing Velan studio’s structure, and how they built the company to take on unique projects like Mario Kart Live, as well as the upcoming Knockout City, an online competitive dodgeball game.

Karthik Bala explained at the top that their goal was to build a studio focused on “discovery,” “our desire was to build a sustainable studio…where industry veteran teams could take creative risks and create new kinds of game experiences.”

To lay the foundation for how Velan Studios approaches game design, Karthik started by breaking down the notions of “convergent” and “divergent” thinking in game design.

In Karthik’s model, convergent thinking is a model that focuses on existing game genres, fine-tuning around established player behaviors and honing craftsmanship. It’s a focus in “best in class” design, over ground-floor, new fields of thinking.

Divergent thinking, by contrast, is an act of building new genres and new types of games for the Bala brothers. Karthik spelled it out as working in a field where uniqueness, new moment-to-moment interactions, and being “hard to describe” as valuable assets. To the Velan Studios’ founders, this type of thinking is the model for creating new video game genres.

This led the pair to break down Velan’s approach to developing new kinds of games. The starting point they said, was to think “simple.”

“Simple” here refers to two concepts, according to Guha. A “simple” game at Velan is easy to pick up and start playing, and something about it is emotionally captivating. “That doesn’t mean it’s not complex under the hood, simple ideas are often ‘new’ because they’re hard to do, and haven’t been done before.”

The next principle is that game ideas need to be defensible. “Is there a secret sauce that makes this hard to copy?” It’s a mindset that doesn’t just refer to game mechanics (A Battle Royale game is easy to copy for instance, because it tends to just have a standard batch of ingredients---map, closing ring, last team/player standing, etc.), but also a team’s capabilities, and why they can work on an idea in a way few other teams can.

Then, Guha said, game ideas need to be scalable. Can a game idea gather new players after days, weeks, and months? Can the game support those high numbers of users? “This can be especially important, because when you’re making risky bets, you’re gambling on there being many many people willing to enjoy the game over a long period of time,” Guha said.

In applying these principles, the Bala brothers broke down what it takes for an idea to take hold at the studio. First, they said the studio takes priority on the team being able to build a prototype, hand the controller over to another player, and asking if they can immediately “feel the magic.” 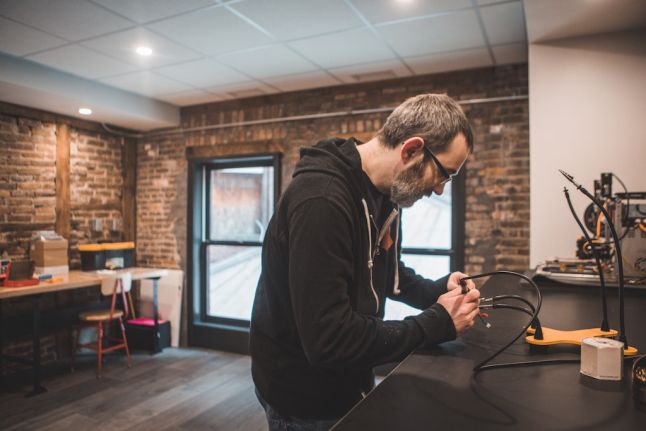 Above: A Velan Studios employee works to find the magic

Second, they mentioned a de-emphasis on pitches, more value on “play.” It’s an emphasis more on research & development that takes place before pre-production. Karthik said this process does require independent funding and a lot of patience, but it allows game ideas to exist more in firm, finalized forms rather than as an assembly of powerpoint decks.

Finally, Karthik said that those creative experiments drive the greenlight, “go-to-market” decision-making, rather than the inverse process at larger companies. Karthik said that he’s seen a lot of large companies greenlight games after a focus on market research---seeing what other games were out there, evaluating the audience, etc.

This does create a divergent set of “go-to-market challenges.” Mario Kart Live, for instance, became a challenge of producing hardware and software at scale, while Knockout City required the construction of a digital only/live service infrastructure.

But in this process, the goal wasn’t “Velan has built X infrastructure, let’s build on it,” it was more “we have faith in this new idea, what infrastructure is needed to ship it?”

Then, as Guha said, “dreamers have to become doers.” That’s where the iteration, the charting toward sustainability, that all companies have to face. “Everything takes longer and costs more than you think.”

It’s here that companies can begin thinking about “evolving with their community,” Guha said. He pointed out that for all their testing on Mario Kart Live they learned unexpected lessons from their player community after the game shipped, that will likely impact their next game.

He broke down that even though the team developed a “build your own course” feature for Mario Kart Live, they hadn’t build in any in-app sharing features for those courses. Since the game launched, they’ve watched players hack together their own networks of courses, minus the kind of framework you might find for course saying in say, Super Mario Maker.

That, according to the Bala brothers, shows where Velan Studios can go in the future, learning more about their original ideas from the players getting their hands on them.