Breath of Death VII: The Beginning - A Post-mortem

On September 23rd, just a little over 5 months after release, Breath of Death VII: The Beginning, the Xbox Live Indie Games title I created as part of Zeboyd Games, passed the 30,000 sales mark, with a trial-to-purchase conversion rate of 66.7% - see below graphs: 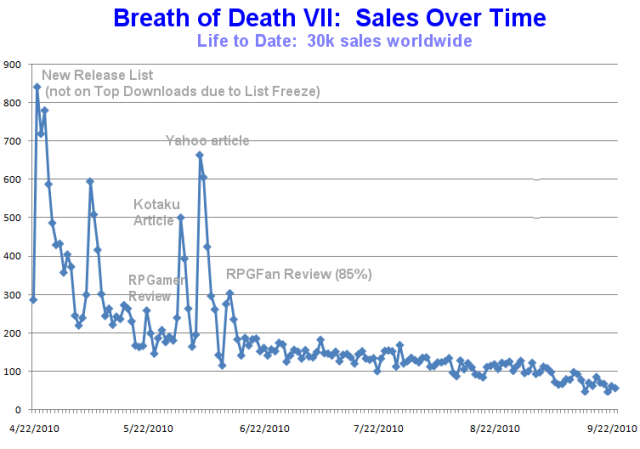 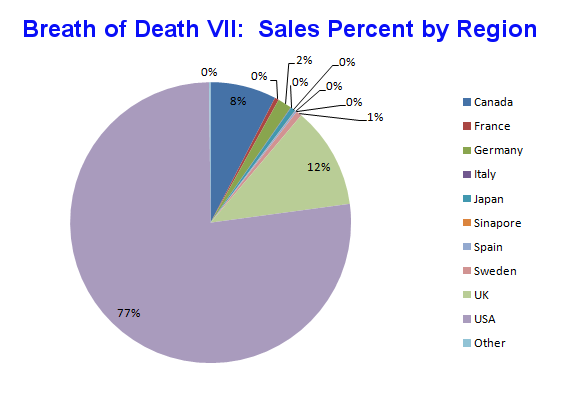 To celebrate, here’s a post-mortem of the game – what we felt we did right and areas we could have improved.

#1 Team – Having the right team can make or break a project. Even if you’re one of the rare individuals who is simultaneously great at programming, art, and music, making an entire RPG all by yourself is a gigantic task. Having talented team members to divide the work and offer encouragement and suggestions is a huge advantage. Bill and I were on the same page from day one and this made the difficult task of making our first RPG much more manageable.

#2 Scope & Planning – There are so many RPG projects that get started and never get finished and a major reason for this is because the developers are thinking too big. Final Fantasy 6 style graphics, an epic 30 hour quest with multiple story branches, an innovative real time combat system – yeah, there’s no way that a small development group can realistically make something like that as their first project. With Breath of Death VII, we planned from the start to have a smaller game (around 5 hours) with retro visuals, and nothing too complicated in the gameplay department. It paid off – we finished the game in just under 3 months, whereas most indie RPG projects take years if they get finished at all.

#3 $1 Price Tag – Our initial inclination was to price Breath of Death VII at $3 or $5 since it’s an RPG and it’s much bigger in scope than the typical $1 game. However, by looking at sales trends on the XBox Live Indie Game marketplace, it quickly became evident that $1 games tend to be the most successful. Since we’re in this for the long haul, we felt that even if we could have potentially made more money with a higher price tag, a low price would help us to build up a fan base and garner us free publicity which would help with marketing our future games. It’s paid off – we’ve sold 30,000 copies at $1, whereas by my estimates Aphelion (another XBLIG RPG) has probably only sold about 2,000-4,000 copies at $3.

#4 Marketing – Most Indie developers fail to properly market their games before or after release. It’s an understandable failing – it’s difficult to get big media sites to take you seriously if you’re a small developer that nobody has heard of, they tend to ignore you. Despite this, we decided early on that we’d really try to market Breath of Death VII in every way we could short of actually buying advertising space. We put a trailer on youtube and gametrailers.com, we posted about it on forums, talked about it on our website, and emailed reporters & reviewers.

Most of our marketing efforts fell on deaf ears, but some were very successful. RPGamer gave us a lot of publicity, with 2 reviews, an interview, and even a guest appearance on their weekly podcast. The Independent Charles show (a video review show on the UK XBox dashboard) was very positive and gave us quite the nice boost in Europe. But we really hit a homerun when a very positive article about the game showed up on Kotaku. Not only did this article give us hundreds of extra sales a day for about a week, but it also resulted in another high profile article showing up shortly thereafter on yahoo games which gave us a similarly huge boost.

Sadly, our marketing stunt of sending out fake boxed copies of our digital game to various media addresses didn’t pan out, but maybe we chose the wrong targets.

#5 Pacing – If there’s one thing that Breath of Death VII: The Beginning has received almost universal praise for it’s the pacing. Most turn-based RPGs are slow plodding affairs. Not ours. We made a decision early on to make sure each element of the gameplay contributed to a fast pace – from the random encounter limits to the lack of battle animations to the free healing after combat to the frequent LV-Ups to the fact that enemies get strong with each consecutive turn. Slow is boring. Fast is fun.

#6 Humor – Sure, there were some naysayers (mostly people who don’t like referential humor), but for the most part, people really enjoyed finding the various references to various games that we stuck in the game (my favorite probably being the Phantasy Star IV sight gag that you see when you leave the first town with Sara). The central joke of our main character being a mute but letting the player read his thoughts turned out to be a big hit as well.

#7 Budgeting – All told, we spent very little money to make Breath of Death VII. Licensing all of the music cost us under $100 total. Many of the songs were even offered to us for free. Beyond that, we just spent a little money to buy a 360 Memory Unit (for testing out the save/load system) and for our boxed copy marketing stunt. Even including the $100/year XBLIG membership cost, we probably spent under $200 total.

I’ve seen several examples of indie developers spend thousands of dollars on assets and tools and that’s just wrong. You can make a good game with free tools or inexpensive tools. Use free tools and split profits with your teammates rather than hire outside help – save big expenses for later games when you’re already making good money.

#8 Music – We were able to find some great songs that cost very little to license for Breath of Death VII. Not only that, but we found our Cthulhu Saves the World composer through Breath of Death (he did the battle theme & final dungeon theme).

#9 Playtesting – Although the temptation was strong after working so long to just put the game into review ASAP, we held back and stuck it in official playtesting for a while first. I’m glad we did – we got some great feedback from other developers that really helped us improve the game. Stuff like the visual cues when you’re losing in battle and including jokes when you examine objects like tombstones were a direct result of playtesting.

What we could have done better:

#1 More thorough debugging – Being our first game, our debugging process consisted of me playing through the game again and again until I stopped finding errors. Unfortunately, we missed a few major bugs and though we were able to quickly release a patch to fix them, I still feel bad for those players who got caught by a crash in the first week.

With Cthulhu Saves the World, we are going to be doing more thorough testing & debugging, complete with checklists to try to ensure that we don’t overlook obvious things.

#2 Better difficulty balancing – Although I think we did a great job on gameplay balance in general, there were two areas that I think we could have improved on. First, the beginning of the game is too easy – I think the big culprit is the fact that most battles early on don’t have enough enemies. Second, the castle dungeon is almost universally considered to be the hardest part of the game – I toned it down a bit from its initial pre-release incarnation, but I should have toned it down even further.

#4 Post-release obsession – Immediately after releasing Breath of Death VII, we were more than a little obsessive with checking google and websites to see what people were saying about our game.  What we should have done is to limit our searches and taken a break from development – not only would this have been healthier, but I think we would have started serious development on our next game quicker had we done that.

Conclusion: Making Breath of Death VII: The Beginning was a great experience for us. It taught us a lot about game development and has allowed us to gain contacts & fans that will help us when we release our future games. Oh and the money is nice too.

Sales are definitely down from what they once were, but I guess the surprising thing is that it’s still selling as good as it is now (around 50-100 sales/day) when the game has been out for over 5 months already. And to be honest, any sales the game makes now are just icing on a delicious cake – the game has already paid us handsomely for the work we put into it.

So there you have it, our first post-mortem! Thank you for all of your support and I hope you continue to support us and enjoy our games when we release our next RPG, Cthulhu Saves the World, in a few weeks.