Analyst: 2018 was an unimpressive (but stable) year for video game crowdfunding

ICO Partners' annual read of the state of crowdfunding is out and rounds up data on both Kickstarter and Fig campaigns into a handful of nifty graphs to illustrate how crowdfunding fared in 2018.
Alissa McAloon
Editor-in-Chief
January 15, 2019

ICO Partners’ annual read of the state of crowdfunding is out, rounding up data on both Kickstarter and Fig campaigns into a handful of nifty graphs to illustrate how this year’s cash raised, total successful projects, and pledge amounts compare to previous years.

The post breaks that data down by platform, then by category, and once more to separate video game and board game performance. So looking at Kickstarter as a whole, the platform saw $607 million in pledges, with $564 million of that being contributed to successful projects.

Games, (including board games, video games, and other game-related projects) were responsible for one-third of the total money raised on Kickstarter with around $192 million pledged for successful projects.

The bulk of that, however, belonged to tabletop games. Video games only raised roughly $15.8 million to tabletop’s $165.3 million in 2018.

Video games, across both Kickstarter and Fig, had what ICO Partners describes in the full blog as an unimpressive but stable year. 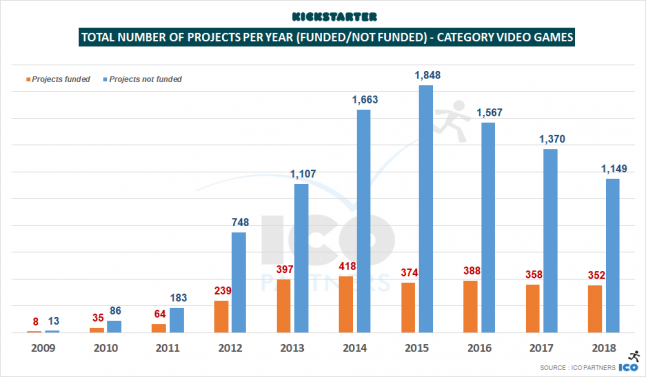 According to Ico Partners’ data, video games have seen very little fluctuation on Kickstarter in the past three years, in terms of cash pledged toward successful projects. This year’s $15.8 million total was just a little below 2017's $17.2 million and 2016's $16.5 million. Though that’s a slight decrease, the report says that those numbers don’t seem to indicate any sort of downward trend.

The total number of video game projects on Kickstarter has been in a slow decline since its peak in 2015. During 2018 just over 1,500 projects were proposed on Kickstarter, a 15 percent decline from 2017, though only 352 reached their funding goal this year. Interestingly enough, while total projects has seen that slight and gradual decrease since 2015, funded projects have remained steady (between 350 and 420) since 2013. A more detailed breakdown of the money raised for those projects can be found in the chart below. 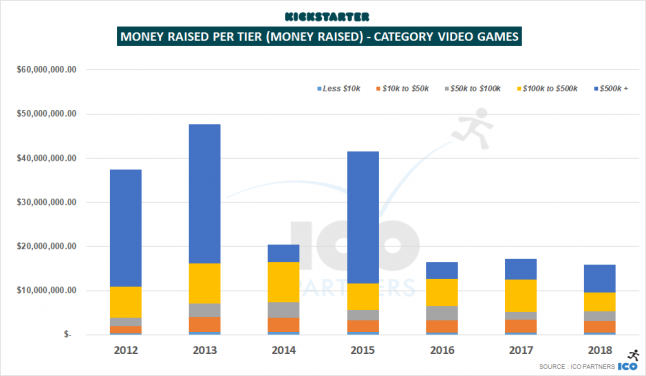 For the crowdfunding platform Fig, video game funding saw a significant dip in 2018, something that ICO Partners chalks up to a slow year, especially when compared to the two preceding years where high-profile campaigns boosted the visibility of the platform. Successful Fig campaigns raised $441,044 in 2018, down from 2017’s $5.6 million. While 6 projects (out of a total of 13) were funded in 2018, nearly half of the year’s total funding came from one project alone: Soundfall.

Fig notably offers equity crowdfunding in addition to the reward-based crowdfunding favored by Kickstarter, and that equity funding is what led project income in 2018, as illustrated next to the splits from past years in the graph below. 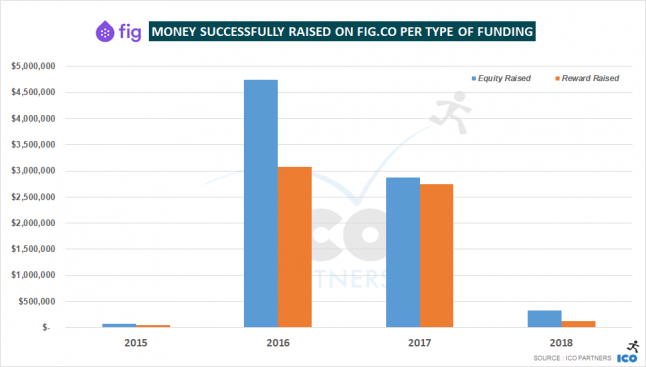