In the 2nd part of our Kickstarter advice series we talk about a major choke point for a lot of campaigns: The Video.
Scott Stephan
Blogger
January 29, 2015

Check out the rest of our Kickstarter Advice Series!:

Part 1: So, you wanna crowdfund?

As always, this is advice. Where we can, we try and back up our advice with data and supporting anecdotes but every campaign is unique. What’s written in this Post-Mortem is not at all a one-size-fits-all solution. We’re always happy to review upcoming campaigns or chat with hopefuls, so if you have questions - fire away! Otherwise, use your best judgement if our advice seems wrong for your project. With that in mind: THE VIDEO!

The Video is really the thing that drove us to do a Post-Mortem in the first place. It was the thing that we feel was most important to the success of our campaign and is also the place that we see otherwise great games trip and fall down on. To start off, here are a couple of commandments

The idea that the video was a commercial was absolutely the guiding spirit of the Kickstarter - it should feel like a rollercoaster. We started by storyboarding it out and as you can see below, the early storyboards match up with the final product pretty closely. We cut a few shots to save on time and others got longer, but by and large the timing stayed pretty consistent from concept to execution.

Having the storyboard for the video not only ensured that we were meeting our asset production and emotional goals, but that we could start to audition composers to score to the video even before it was finished. We had a piece of music from Chrono Trigger that matched the intensity we were going for and it was extremely helpful for getting composers on the same page.

Auditioning a composer was a huge effort that could easily be its own article. Thankfully, we ran into the amazing, amazing, amazing team Power Up Audio, who had just finished up some work on the IGF Nominated Crypt of the Necrodancer,  at GDC 2014. This proved to be probably the luckiest meet and greet of the entire project. They really added a whole dimension to the trailer that we didn’t even know we were missing. That’s really a testament to the fact that in such a small block of time, every single detail counts- Great visuals don’t pop without great sound and vice-versa.

The entire production on the video took nearly five months from the first concept to the day we launched. We had to create a ton of new assets and features for the shots you see in the demo, all while also legally incorporating, writing page copy, budgeting and researching reward costs and working full time jobs. .

But here’s a dirty little Kickstarter secret: A lot of major Kickstarters (And, no, we won’t name names. But, yes, you probably saw their videos) fake the video. The gameplay in the video is either an animation not running in engine or is heavily scripted. There’s very little real gameplay in Kickstarter trailers. For our part, everything you see is running in-engine. But for many of those shots, if the camera went 100 pixels to the left or right, it’d be a vast nothingness.

We felt okay with this not only because “everyone else is doing it”, but because those locations, features and enemies will eventually be in the game. We were careful not to overpromise, but in keeping with the idea of the video being a commercial, we really wanted to sell what we were going to release, not what we had on hand. We also had the unique challenge of explaining all of our mechanics without voice-overs or on screen text. Creating unique scenarios to clearly explain the game (Like the split-screen Ragworm chase in the desert) was the easiest way to do this.

A couple of examples, good and bad

Getting into the issue of length and getting your gameplay on the screen: People have short attention spans. Entertainment is a click away. Respect their time- Give them something exciting. Here are the viewership stats for our video. I don’t know quite how these stack up against Kickstarters (Wanna share your stats? Drop us a line!), but we were pretty satisfied.

GET TO YOUR GAME FOOTAGE ASAP.

Holy moly, this is a huge one. Huge enough that I feel like I need to call out a few examples.

Crossing Souls rules. It has amazing artwork, a fantastic world and phenomenal animations. I couldn’t be more excited to play it. But the video is not so great, which is frustrating and confusing to me as a fan. Instead of seeing that amazing artwork and that unique world, we get some pretty-good-but-not-what-I-came-here-for animations. If you have A+ product, as the Crossing Souls team did, show it to me right away! It’s almost a full minute before I see any gameplay footage. You have mere seconds to keep someone interested in your game and to direct them to pledge. Every second I’m not getting psyched about this game is a second wasted. Additionally, I’m never completely sure what the game is by the end of it.

On the other hand, Starr Mazer has the best video we’ve seen in a long time. We get a cool, short animation at the start that gives us the tone and direction for the rest of the video. And in 11 seconds, we’re at the game footage. For a game with such a unique premise (SHMUP meets Point and Click adventure? Sign us up!), I still manage to know everything I need to in 39 seconds.

Another option to make a video that’s simply incredibly share-able in the hopes that it’ll go viral. Enter, STRAFE: 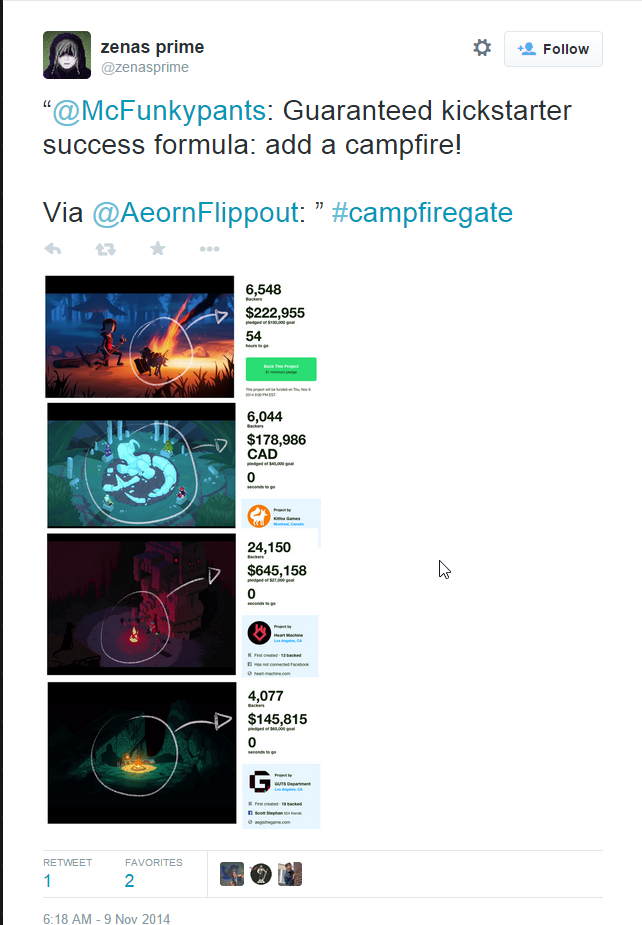