A burglar-cat-turn-human finds love in Purrfectly Ever After

Inspirations and idea conceptualization behind the first game from Weeev, Purrfectly Ever After.
Sue Anne Chan
Blogger
July 20, 2015

About the Game
Purrfectly Ever After is an original English language visual novel (OELVN) for girls. This dating sim is filled with side-splitting comedy, over-the-top drama, and of course, heart-melting romance. This first game from Weeev aims to bridge the gap between Japanese-centric otome games told in a not-so-Japanese point of view and storyline.

Purrfectly Ever After focuses on a food-loving burglar cat who gets herself into a series of unfortunate events which ended up feeling sorry for herself. Luckily for her, she also encounters kind strangers who rescue her along the way. She wished that she could become a human so that she could earn food honestly. Her wish is overheard by a fairy godfather she didn’t even know she had. And so begins her story.

There are 5 romance-able characters that you can start your story from and each of them has 2 branches of ending, Romance and Destiny. If the hidden character milestone is achieved, an additional character route will be added into the game, totalling to 6 characters.

Beginnings
In late 2014, I was looking for a partner to work on a visual novel when I met Lun through a mutual friend. We hit it off immediately with Ace Attorney and how I want to make a game and how he can contribute to it. Lun is an industrial expert in developing mobile apps. One of the app he did recently was a gaming app, not just any games that we know of, but the type that involves monetary betting and securities. On the other hand, I'm a regional creative lead for a multi-brand company and I provide creative guidelines, inspirations and approvals for our partners. Both of us decided to form Weeev with Lun heading the game programming and me covering writing, directing and producing projects for Weeev. Although both of us are working for others full time, we hope that one day we could fulfil our dreams in making visual novels as our job.

Weeev is actually a homophone with the word, Weave. The core games that we make as a company are essentially visual novels and we encourage players to weave a story of their choice base on the game’s theme. Our aim is to be on par with the likes of other otome game giants such as Voltage, Otomate and Rejet and strive to provide the best storyline, artwork and most importantly, experience for their players. We want the players to gasp at a plot twist, smile at a sweet moment, and ultimately we want to touch the players' hearts with our stories. Weeev’s maiden game is geared towards the female audience, but we plan to expand to more genres in future when we manage to build a bigger team.

Inspirations
One of the factors that fuel me to start this project is the lack of good otome games in the market. The good ones are always in Japanese language only, but there are more titles in English nowadays. I was playing one of them when I thought, hey if they could change it here or there, it'll look more interesting. I start to question a lot about the game flow, plot, characters, etc. And then, I figure that I could try to make one and see how the community takes it.

The implementation of Purrfectly Ever After was a juxtaposition of a few ideas. The first, of course, is my cat. I've always imagined the possibilities of my cat talking to me. And from there I would visualize him to be a human and the type of personality he would have etc. So yeah, I guess you could say that the plot idea starts from my cat. I continue to expand the possibilities of being a cat, to see the world in the eyes of a cat. I ask a lot of questions to myself during the incubation of the project like how would I react and feel as a cat? What about a glutton cat? A connoisseur cat maybe? And of course the protagonist's personality influences the course of action and story flow, which brings to the next point...

I have always wanted a strong, empowering female lead. This is one thing that sets us apart from most of the Japanese otome games. Due to cultural differences, the Japanese centric otome games have few such characters and whenever I play an otome game, I would be fantasizing for the protagonist to be more vocal, to have stronger characteristics etc. So I incorporated all my inner wants into the protagonist in Purrfectly Ever After and this will be the core essence of the protagonists in future Weeev titles as well. In fact, the next project in the pipeline is about self-esteem and empowerment, which we will discuss next time. 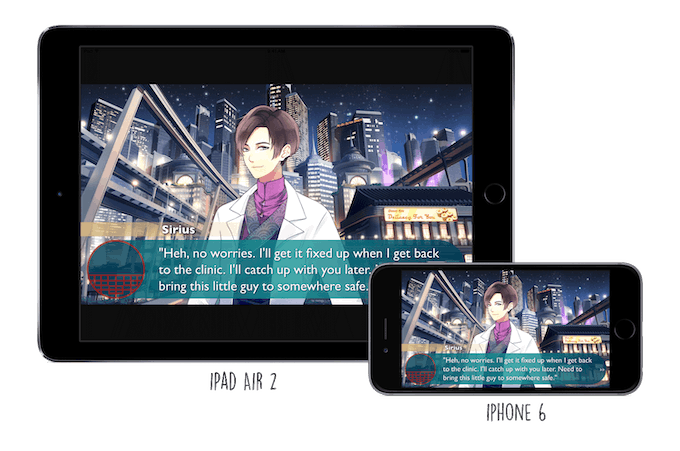 Platforms
I started playing otome game on consoles like Nintendo DS, PSP and now on smartphones (my first otome game was Tokimeki Memorial ~Girl's Side~!). To me, otome games should be portable. I would like to keep my games close to heart so I could play them whenever I want, wherever I want. They are suppose to be my companion. So from the start, my idea of doing an otome game has always been on smartphone as the technology now allows us to switch from portable consoles to smartphones, which is something that a lot of us rely on now. And having a game as an app is also very accessible and convenient.

We have only been thinking about releasing the game on mobile until our Kickstarter campaign is launched. We started to receive feedbacks for a PC release. At that time, we realized that in a lot of countries, PC is still the preferred gaming platform for visual novels. After discussing with Lun, we decided to give it a try since we are also developing for Android. So exporting the game to Windows is totally viable. With popular demand, we expanded another distribution channel on the Windows/Mac platform.

Why Kickstarter?
Why not? It's a big market in reward type crowdfunding and it has proven to help many small businesses to start up. I think it's the perfect platform for us to raise funds. We have already done with a good part of the aesthetics and game engine which we funded on our own, but we need more funds to pull together the rest of the creative assets in order to complete the game. We plan to have more than 30 backgrounds, intriguing event CGs and multiple emotions on each character to deliver the stories. We will also be creating different poses and attires for modularity purposes. Most of the funds goes towards aesthetics, namely the character designs, event CGs and background art. And if we reach our funding goal, stretch goals will be placed to add on more game features, more graphics and pay back the sum that Weeev has absorbed earlier. The sum that we absorbed were initial character designs and background art, music, writing, editing, programming, translation and Japanese voice acting. We believe that Kickstarter is a platform with people who support creativity and fulfill dreams. We have seen visual novels succeed here with the help of like-minded people and so we hope we will too.


Malaysian Developer
Both of us are born and bred in Malaysia and being unconnected to the gaming industry in Malaysia is putting us in a disadvantage. I'm quite sure there are a good developers out there but Weeev is very, very new and some do not even consider visual novels as games. On top of that, Malaysia may be famous for producing rubber and oil but not games. Therefore, the confidence level may be low. Although both of us are from Malaysia, the rest of the team is scattered around the world, each with their own expertise. And I dare say that I'm very strict when it comes to quality of work. Visual novels are all about the story, the visuals, the multimedia. Everything has to come together to make the experience enjoyable. We also take constructive feedbacks seriously. For example, there is a collective of comments about the writing, which does not 'flow' properly. This is something that we will not notice if not for these feedbacks. As a result, we hired a new writer to help us to get things on track. Another feedback would be the PC platform which I have mentioned earlier. These are the things that helped us to develop more knowledge in the visual novel gaming world.