SEARCH
A minimum of 3 characters are required to be typed in the search bar in order to perform a search.
Announcements
Event
Free Webinar on 5/24: How Predictive Analytics Drives Mobile Conversions & Boosts Revenue - Register Here!
PreviousNext
Business
9 min read
article

Now knowing the extensive struggle that was this 4-year project, would we do it all over again? It’s a tough question to answer without sales data, but that may give us the most honest answer.
John Watmuff
Blogger
January 19, 2021

It was a major exhale to see my open-world, galactic survival strategy game Lilith Odyssey finally make it to the Steam store on January 8, after 4.19 years in development. I am part of a two-developer studio called Chaystar Unlimited, and we have been working on our game for about 4.19 years, according to my therapeutic excel spreadsheets. We worked on the game in our spare time while holding two ordinary office jobs. Our game has now been featured in a variety of publications and after so much time in development, the attention has been charming and thrilling!

I want to talk about the bright sides of being naïve and stubbornly curious.

Now knowing the extensive struggle that was this project, would we do it all over again? It’s a complicated time to answer that question without having the hindsight of sales data to determine whether making this game was “worth it.” Regardless, in case you are as obsessive/naïve as we were, here’s what we learned.

We Learned to Relax Effectively and Appreciate Small Progress

To give a sense of what 4 years of game development looks like, you can see my source-code commits (on GitHub) — a steady mix of progress and breaks. 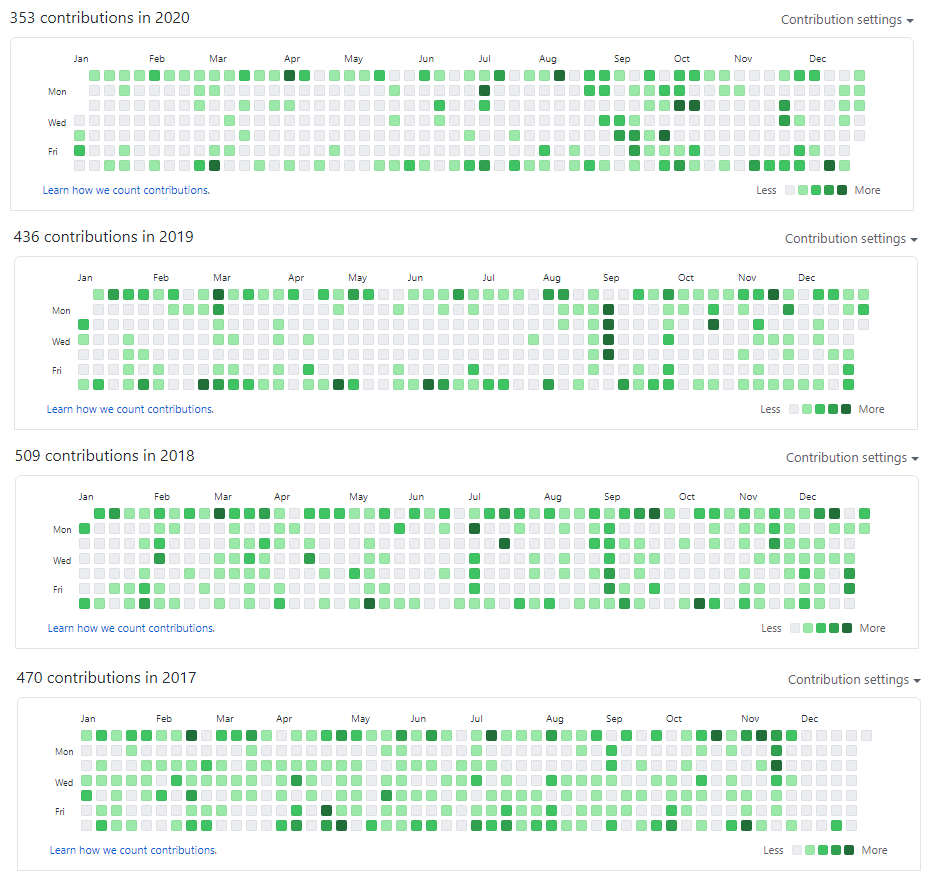 It may sound counter-intuitive, but I learned to take lots of breaks. Naturally, I’m an obsessive coder that wants to stay up until 3 a.m. to see my vision come to life. Unfortunately, this is not sustainable, and also clouds my judgement. I tend to *not* reflect on my work while in this state. I still think it’s great fun to “enter the zone” — this process might even channel some deeper artistic output. But between work, countless weekends of game dev, and even small chunks of progress on weeknights, I begin to simultaneously burn out and become anxious. So to keep moving forward, I generally have to take a step back, focus on “life things,” and allow my mind to wander.

These relaxation moments are good for mental health, but they also allow me time to think about my work – do I like what I’ve made so far, would I enjoy this feature? Personally, I found that the key to relaxing effectively is being kind to yourself, allowing your mind and body to recover in a way that is right for you. I did the best/most-focused work when I took time or even weekends off to play golf or invest time in parts of life that make me feel good. Days, weeks, or even months: it’s okay to take a break, because it’s only a break.

Additionally, never begrudge progress. Even if something takes an exceptionally long time, as long as you complete *something*, you are now further along and in a better position than you previously were. Working in a large bureaucracy for most of my professional life has helped me realize this — big changes happen slowly and are often the product of many tiny bits of progress. Take what the world gives you!

Admittedly, Lilith Odyssey has an enormous scope — a very stupid (hasty) decision made early in the process. There are more than 1000 planets to explore, 16 space ships to customize with various parts, 20 alien creatures, procedural characters, procedural buildings, space stations, galactic monuments, and an in-game radio with original songs, ads and DJ segments. And honestly, perhaps the game didn’t *need* all of this. We just felt it would be “cool to have.” But to have all that, staying motivated was a big challenge. It wasn't until roughly 1.5 years of dev, amidst several growing pains, where we thought, “Uggh, why did we choose to make this game so unwieldy!?” But we kept working. What helped was recognizing the development of our skills (i.e. better visuals, better game play, better music) and knowing when our growth was enough to hit game quality markers we could live with (not necessarily the best we could do).

We were aware of all the advice suggesting that a large 3D game is very difficult to complete — but we went for it anyway!

By taking on the challenges of a large scope, we quickly became better learners. I would argue that the ability to learn new things is a skill you can work on, a skill that pays huge dividends in artistic confidence. And part of this skill is recognizing when you’ve learned enough to achieve a solid version of your vision (not its perfected form). For example, aesthetically, our game features a lowpoly/toon-shaded style that looks more playful than technically advanced. I’m sure that other talented devs can do much more. But for our own purposes, this was a sweet spot between looking good enough and moving forward.

Learn, make it work, move on. Instead of minimizing the scope of the game to fit our skills, we challenged ourselves and hit depths of quality that we felt we needed. We deepened our skills in areas of coding, sound design, 3D modeling, animation, world building, and marketing to an extent that a smaller project would not have merited.

The pay off? We believe we made an explorable, immersive, open-world galaxy. Low poly, sure, but we hit the scope. We realized an artistic vision, and explored new territory that we otherwise may have avoided until a later time.

So, if you find yourself facing a large body of work, my advice would be: give it a shot so long as you are prepared to learn. If you try to minimalize your ideas, you may destroy the uniqueness of your art or miss out on finding the inner voice of your work. It takes time to find good art within yourself!

We Overcame Fear of Difficulty By Surrendering Certain Battles

When we started our project, I had never programmed a 3D game before. I am an experienced software engineer with more than 10 years of experience in a non-gaming software industry. But prior to this game, working in 3D greatly intimidated me! I had consistently defaulted to making simpler 2D games. In college, I nearly failed a graphics programming course.

I overcame this specific fear by reading tons of articles about 3D development online, acquainting myself with the proper tools, and repeatedly failing (more on that below).

The grander challenge to overcome, however, is the fear of difficulty (intimidation). As my game dev companion has said, it is the voice of self-doubt in all of our heads that says “this is too hard for you to complete.”

Early on, my game dev partner motivated me to imagine our game as a 3D game. I was extremely hesitant, and even thought it impossible, but I gave the idea a chance. From there on, the two of us developed an internal culture of fearless problem solving. We were committed to learning anything we needed to learn to complete the project. We were ready to fight any battle — but also willing to tactically surrender battles that were far beyond our skills.

The possibility of “falling short” never leaves the mind. Especially in the face of consistent technical hurdles that seem to limit our vision. There were many sobering moments for us where we realized that our technical limitations stood in the way of creating a feature or aesthetic we otherwise would have wanted. Sometimes, we could learn our way through the problem. Other times, we backed down and had to re-concept elements of the game.

We Grew Used to Failure

Our failures have been frequent and massive. For every one thing that went right, I would say that four things went wrong. We learned to accept the failures, identify a different approach, and move forward with a plan. Not all of our ideas panned out – for example, we had a feature where rescue crafts would pick you up if you were stranded on a planet. We ended up deciding that this feature, while super-cool, was not necessary for the larger game play and its exclusion would not affect game enjoyment. We had to give up on various other concepts, and we had to recreate some content with different styles — until we found something that worked well enough. Perfection was not the goal. Our reasonable satisfaction was.

Ultimately, for a small team like ours, game development is an iterative crafting process that requires a balance of rework and acceptance.

Link Up With Others

It’s important to acknowledge that embarking on a years-long project was made easier by having a trusted creative partner. “Frodo didn’t get the ring to Mordor alone, after all, even when he insisted on it.” — words from my game dev partner.

When others are involved, there is more accountability and commitment to see your part of the work through. And when your creative energies are thinning, sometimes all it takes is seeing what your team member has done to stoke your own passion for the project.

For solo devs, I’d recommend working with artists – whether that’s for cover art, sound tracks, or asset modeling – to keep things exciting. Not only can you rely on skills better than your own in certain development areas, but getting quality input from others raises the bar for your own work. In the best case scenarios, there’s a symbiotic cycle of great work inspiring other great work that inspires other great work.

Was It Worth Working on a Game for Four Years?

Yes (but you have to finish it).

We are currently polishing Lilith Odyssey and marketing our title as we look ahead to an early Access launch. By many accounts, we have no idea how successful the game will be from a sales standpoint. So, why was the struggle still worth it?

We better understand our capacities to learn. Our weak spots are animation and rigging, which we look forward to addressing in future work. But we are not intimidated by the difficulty or challenge of trying something new and complex.