This week's surprisingly video-heavy highlights includeÂ a great mini-doc about the history of theÂ Punch-Out franchise, a review (& compendium of reviews) for the latest acclaimed Smash Bros. game, & a multitude of other neatness.
Simon Carless
Blogger
December 09, 2018 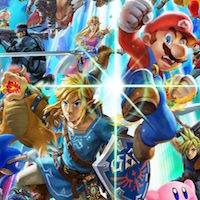 This week's surprisingly video-heavy highlights include a great mini-doc about the history of the Punch-Out franchise, a review (& compendium of reviews) for the latest acclaimed Smash Bros. game, & a multitude of other neatness.

Thanks for tagging along for Issue #118 of Video Game Deep Cuts! A little busy overseas, so sorry, this is as erudite an intro as you're getting this week! Salut!

What the Popularity of ‘Fortnite’ Has in Common With the 20th Century Pinball Craze (Clive Thompson / Smithsonian Magazine - ARTICLE)
"As with violence, these fears are probably overblown, as psychologists like Powell-Lunder note. The great majority of kids learn to self-regulate, and appreciate when parents help set limits, she says. Plus, Fortnite has many benefits, she notes: “It’s enormously social—it’s a really good connector,” attracting many girls and other kids who normally don’t play games."

The 13 biggest announcements from The Game Awards 2018 (Nick Statt & Andrew Webster / The Verge - ARTICLE)
"The Game Awards is ostensibly the equivalent of the Oscars for the video game industry, but the biggest names in interactive entertainment have never been known to turn down a good marketing opportunity. So The Game Awards have also evolved into a jam-packed news event, with new trailers, game announcements, and other surprises packed in between the night’s slate of prizes. [SIMON'S NOTE: a useful compendium here.]"

Move over AlphaGo: AlphaZero taught itself to play three different games (Jennifer Ouellette / Ars Technica - ARTICLE)
"Google's DeepMind—the group that brought you the champion game-playing AIs AlphaGo and AlphaGoZero—is back with a new, improved, and more-generalized version. Dubbed AlphaZero, this program taught itself to play three different board games (chess, Go, and shogi, a Japanese form of chess) in just three days, with no human intervention."

The Story of Punch-Out!! (Gaming Historian / YouTube - VIDEO)
"A documentary detailing the complete history of Nintendo's Punch-Out!! video game series. In 1983, Nintendo had a problem: They had too many arcade monitors. Rather than toss them, they made a new game that could use 2 monitors. That game was Punch-Out!!, one of Nintendo's most beloved franchises."

The 30 Best Videogames of 2018 (The Paste Games Writers / Paste - ARTICLE)
"You can say a lot a things about 2018, but you can’t say that it didn’t have a large and diverse batch of really good videogames. The constant churn of this job makes it hard for me to remember what I played last week, much less years ago, but I can’t recall a recent year with such a wide-ranging assortment of games worth playing and crowing over."

Smash Bros. Ultimate review: The best fighting game on any Nintendo system (Sam Machkovech / Ars Technica - ARTICLE)
"Super Smash Bros. Ultimate isn't content being merely a "big" video game. Nintendo's latest mascot-fighter sequel seems determined to wallop you over the head with its enormity, even after establishing itself as an oversized package. [SIMON'S NOTE: also see like a zillion other reviews, 99% of them very positive.]"

AdvX 2018 - Jon Ingold - Sparkling Dialogue: A Masterclass (Jon Ingold & Sally Beaumont / AdventureX / YouTube - VIDEO)
"Game conversations are all too often static and stagey: there’s none of the messy, fun and characterful back and forth that makes a conversation sparkle. Using Ink and assisted by Sally Beaumont, Jon Ingold (Heaven’s Vault, 80 Days) will create conversations that are dynamic, contextual and full of moments of connection. [SIMON'S NOTE: the other AdventureX 2018 videos are up too!]"

Valve's New Game 'Artifact' Is a Perfect Machine for Making Money (Matthew Gault / Motherboard - ARTICLE)
"Valve is great at making video games, but it’s even better at making money and Artifact is a perfect machine designed to efficiently extract value from its players. It does so by selling players card packs. You don't have to buy them, and I can imagine myself having a lot of fun with Artifact without buying any packs if I tried."

The Joy of Playing Dress-up in Team Fortress 2 (Kyle Morrell / VRV Blog - ARTICLE)
"Valve was a pioneer in managing massive virtual economies and while a lot has been written and said about the immense, complex, and robust world of trading high-value Team Fortress 2 items, I don’t care about that. I just care about dressing up my mercenaries all cute."

FLATLINE: How The Amiga Languished (Ahoy / YouTube - VIDEO)
"[SIMON'S NOTE: Not chiefly about video games, but includes some material on Cinemaware's Defender Of The Crown & various other bits of Amiga goodness as well. And it's from the genius creator of the recent Monkey Island & Polybius mini-docs.]

How Bad North makes humans out of little soldiers (Alex Wiltshire / RockPaperShotgun - ARTICLE)
"“The units should feel like humans,” says Oskar Stålberg, co-creator of Bad North, a strategy game about little soldiers defending their islands against bad Vikings. “They’re quite stylised; they don’t have faces and barely have arms, but they should feel human in their behaviour and what they’re capable of doing. They should feel fragile and it should look like fighting is a courageous effort.”"

Spacewar! Creators Didn't Know They Were Making History (Gita Jackson / Kotaku - ARTICLE)
"Long after I’m dead, if the country remains unscathed, there will be a recording with me on it in the Smithsonian. On it, I will be heard asking the developers of Spacewar! if they had any idea what the video game industry was going to become when they made their game in 1962. [SIMON'S NOTE: see also: '‘Spacewar!’: Birth of the Game Industry'.]

The video games that are good for your children (Keza MacDonald / The Guardian - ARTICLE)
"Quirky and egalitarian, Toca Boca’s games are a world away from the usual half-hearted or exploitative kids’ apps. We meet the Scandinavian company taking child’s play seriously."

Red Dead Redemption 2: A deep dive into Rockstar’s game design (Dean Takahashi / VentureBeat - ARTICLE)
"Among the gems from our conversation: Rockstar once cast Red Dead Redemption 2’s main design as a procedural world (one that the game’s software generates), with stories driven by the open world and emergent behavior. But the company trashed it because it just didn’t work."

How Neopets was sold to Scientologists (People Make Games / YouTube - VIDEO)
"Hey, who remembers Neopets? If you used the site back in the early 2000s, you might be surprised to learn that it was once owned by a group of devout Scientologists. Join Chris as he investigates the link between virtual pets and Scientology."

The A.V. Club’s favorite games of 2018 (Various / A.V. Club - ARTICLE)
"There isn’t a clean-cut narrative to the games that stuck with us in 2018—which span massive superhero extravaganzas, elliptical horror experiments, and psychedelic VR rhythm games—which is, truly, proof of how rich and exciting games can be."

Tim Sweeney Answers Questions About The New Epic Games Store (Matt Bertz / Game Informer - ARTICLE)
"The PC game distribution business could experience a giant shakeup in the coming months and years following the news that Fortnite creator Epic Games has built its own store. This new developer-friendly model offers a dramatically more favorable revenue split than rival marketplaces like Steam, but beyond that, we still have questions about how this Epic Games Store operates. Who better to answer our questions than Epic Games founder Tim Sweeney? [SIMON'S NOTE: also see a short Eurogamer Q&A.]

What 'Darksiders 3' Teaches Us About Gaming's Weirdest Company, THQ Nordic (Patrick Klepek / Waypoint - ARTICLE)
"Is THQ Nordic the gaming equivalent of Ikea, selling surprisingly good stuff at a reasonable price, undercutting the notion spending more means getting better?.. Is THQ Nordic masquerading as Big Lots, a valuable “YO, we’ve got everything and it’s cheap as hell,” store, but one that works because it’s honest about what it’s selling? Or is THQ Nordic a flea market, full of cheap knockoffs and hand-me-downs in questionable condition?"