The influence of music on the perception of difficulty

Can music influence the perception of difficulty? In this post, I'll summarize my thesis on the subject of music and perception.
Harm-Jan Wiechers
Blogger
January 22, 2016

Can you change the perception of difficulty with adaptive music?

For my bachelor thesis, I wanted to experiment with music and how it could influence the player. I’ve made adaptive music for a number of games now, be it vertical or horizontal. Something I had always been wondering was: Am I making this game more difficult by adding music that gets more and more complex as time passes? I’ll discuss the most important aspects and results of the research here, but there is way more to the research than you’ll read here. If you want to know more about my research, you can reach me at [email protected].

So what I set out to prove was, does the player feel like the game is getting harder when the music changes while playing? The setup for the test was quickly established. I would make 3 versions of the same game (not by myself though. I made the game together with Blauwprint, who used the same game with a different setup for their own thesis). The 3 versions would only differ in the way the music would change. The first version would have the music change to make it seem like the game was getting easier, the second would have the music seem like the game was getting harder and the last version would be the control version. The game I used would be one that required the full attention of the player, without being too frustrating or hard. In the game, you lead trains to the station of their color by changes switches. Players would need to pay attention to the trains coming in on one side of the screen, and make sure they would reach their station on the other side of the screen. You can see a screenshot below. Players needed to play one level, and the level lasted just a bit longer than 1 minute. Now on to the music. For music to have effect on the players, there are a few things you need to take into account. The music must fit in the theme and esthetic of the game. Visuals can enhance the impact of the music and vice versa. Music can still have effect if it doesn’t 100% fit the theme of the visuals and gameplay, but it takes more time for it to be organic to the player. With only 1 minute of playtime, the music had to fit immediately. There are a couple of themes that are directly apparent when looking at the game. Trains, colorful, simple and puzzles are some of the themes I used to develop the music. Listening to other puzzle games like Professor Layton, you’ll hear a lot of classical instruments like violins, the piano and other acoustic instruments. Using the same instruments for my music meant that the music would fit the expectations of the player even better.

I now had an idea how the music would need to sound, but the music still needed to change to influence the players. I did a lot of research on what kind of influence music could have on people and their perception. I looked at research done on gamers and their response to music during games, but I also included research done outside of games. When people listen to complex music, they tend to make more mistakes and want to rush through the task they are given compared to people listening to less complex music. This was something I had already anticipated. When listening to complex music, you will get distracted more easily compared to less complex music. I also looked at time perception, and how that changes when you are handed a difficult task. When people are given a difficult task, their time perception changes. Time seems to move slower. My theory was that by messing with the time perception of players with music, the task would seem more difficult. Instead of the task effecting time perception, the music would influence the time perception and trick the player into thinking the task was to blame. Tempo, key and complexity all had influence on time perception. Music in a minor key makes time go faster, complex music makes time go slower and tempo can make time either go slower or faster by having a slow or fast tempo respectively.

I then went to listen to some soundtracks for games that had distinct easy and hard parts. Skyrim for example has parts where you are just walking through the forest or a peaceful town, and moments where you are fighting giant fire breathing dragons. I tried to find the differences in the music that would be playing at those moments. Peaceful and easy moments tend to have music that doesn’t have a lot of bass to it, drums are quiet or not there at all, music builds slowly and it has few different layers. When you are in combat, or are dealing with a hard part of the game, you’ll hear a lot more bass, drums are a lot more present and frequent, the music will build more quickly and have more layers that compliment and contradict each other.

I then produced the music. First the base layer, and then the 2 different versions based on my research. The base version would need to be able to stand on its own, but have enough room for another layer for added complexity, and it would need to be able to still sound good when I would take away a layer or 2. The version that would make the game seem harder had an extra melody, the bass was more present and drums would hit harder. The version that would make the game seem easier had a bit more treble, the drums were a little less present and I took out a bass layer. For the music to be effective, however, there needed to be something for the player to compare it to. A track that starts off intense and complex won’t have that big of an impact as a track that starts off a little bit more relaxed and then suddenly ramps up. So what I decided to do for the 3 versions is have the music start on the control version music, and then halfway through the level change to either the more complex version or the less complex version. The change in music should be noticeable if you’d pay attention to the music the entire time, but it felt organic if you played the game like you’d normally do. 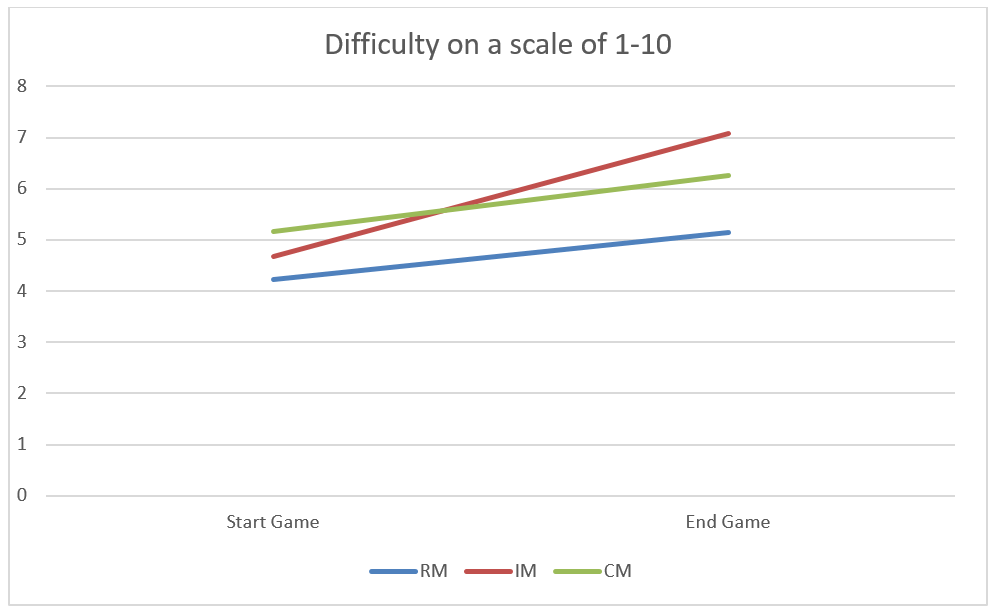 Players were asked at the end of the game, how they would rate the difficulty of the beginning and end of the game. Because their experience was rated at the end of the game, and not during, their entire experience has been effected by the game. The entire experience is taken into account when rating the difficulty of the game. The placement of the lines is as expected, with the RM version scoring the lowest, IM getting the highest rating at the end, and the CM version scoring somewhere in the middle. Also note that the IM version ramps up a bit harder than the other versions. This probably is because the contrast in the start and end of this song is a lot bigger than other versions, which makes players underestimate the start of the game. A game with intense music can feel up to 40% more difficult compared to the same game with more relaxed music. 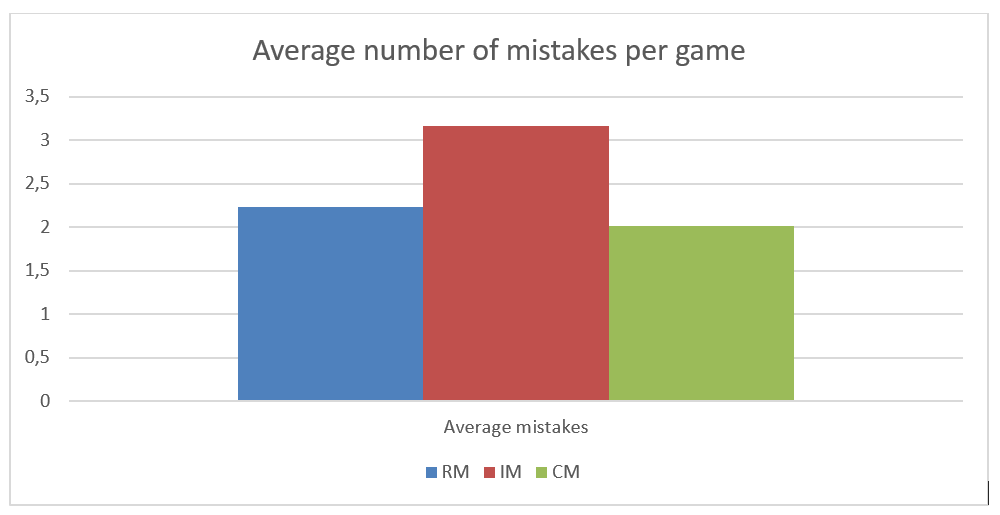 Do these numbers also translate to the game actually being more difficult? The graph below shows the average number of mistakes made during the entire game. The amount of mistakes made increases about 50% between the relaxed music and intense music version. What is interesting, is that the relaxed music version has a bit more mistakes on average than the control version, despite scoring lower on perceived difficulty. Perhaps mistakes were made due to distraction when the music changed a bit. The music didn’t change as the player would have anticipated, throwing them off. This is speculation though, and may be a good question to include in further tests. 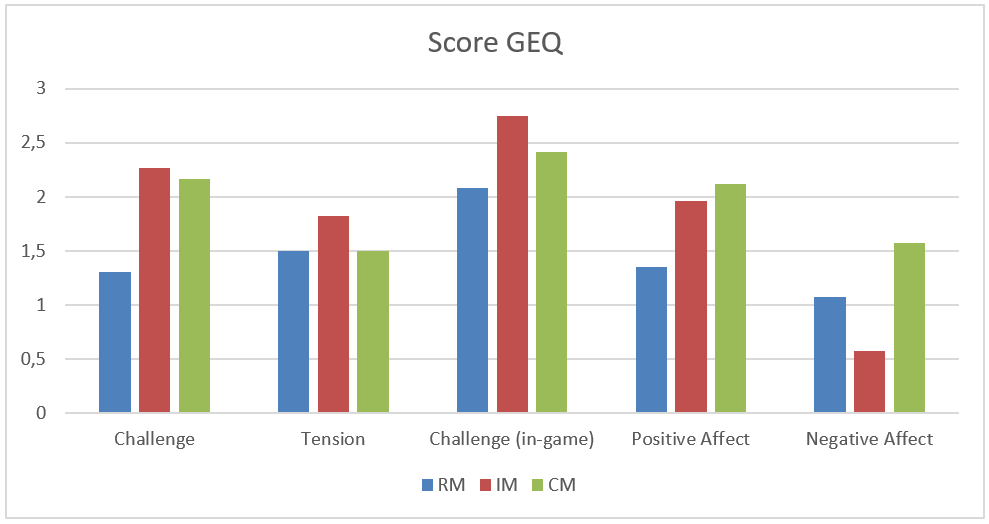 Some questions from the game experience questionnaire were also used to gather information. Looking at the negative affect graph, it is interesting that the IM version scores the lowest. The questions that determine negative affect include: “I thought about other things” and “I found it tiresome”. The relaxed version, and the control version both don’t distract the player as much as the intense version. The intense version also has more changes in instrumentation and complexity, which might hold the attention of the player a bit more.

All in all, this isn’t a conclusive study on the influence of music on the perception of difficulty, but it might give you an idea of what music can do! During my research, I’ve heard a lot of people who had already made up their mind about music and difficulty. They either thought music didn’t do much for difficulty, or knew for a fact that it had a lot of influence on how you look at a game. I hope this research helps you include music as part of your design.

And, if you want more info or just talk about music or this research, you can reach me at [email protected]!