You know how Maslow has that great Hierarchy of Needs pyramid? Let's try one for creative people.
Ariel Gross
Blogger
March 22, 2016

Predictable Humans (so cuddly though)

So, like, human beings. For the most part, a totally predictable space creature that we all know and sometimes love. We don't really need to put forth a ton of brain power to see some patterns. For example, starving-to-death human is more likely to look for food than for an evening of appreciating fine art. Human that can't afford to pay rent when it's due is probably looking for some cash more than looking to untangle the moral implications of fracking. It's just how humans work most of the time.

This dude Abraham Maslow, he saw the patterns, and he wrote about them in a paper called "A Thoery on Human Motivation." In it, he points out that humans have physiological needs, like occasionally breathing clean air and getting a taco in that empty stomach. Needs that have to be dealt with before some straight-up enlightenment happens.

So, Maslow's theory, the one called the Hierarchy of Needs is often displayed as a pyramid. Check out this version from Wikipedia: 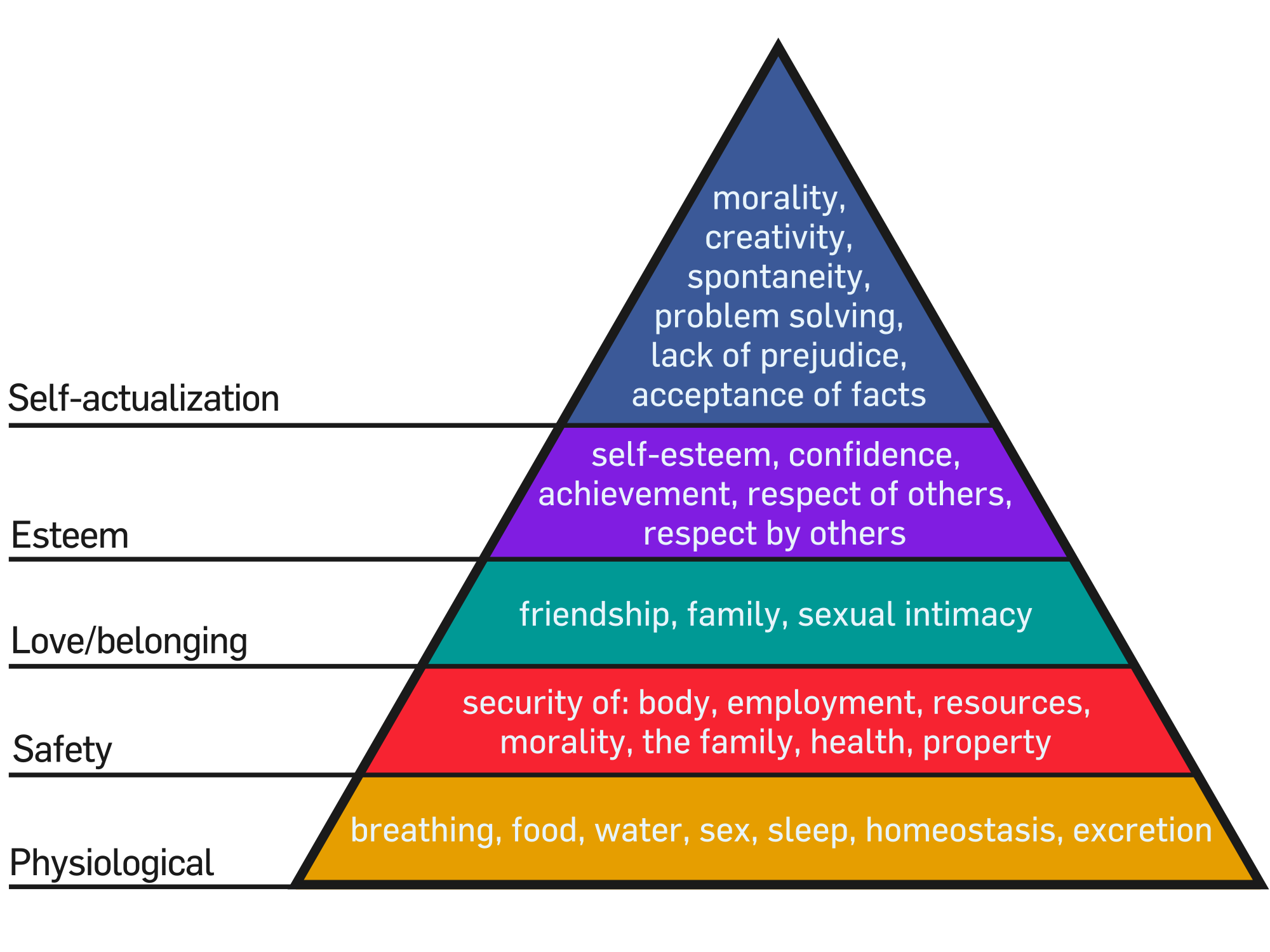 Makes sense, right? Like if you're not eating and breathing, that's gonna be priority one. Next, some money in the pocket and nobody physically assailing us, priority two. It goes up and up. I don't need to repeat it. It's right there in that image.

Well, funny thing about that pyramid is that I see it everywhere I go. I see the pattern. You can lay it like a transparency on top of all kinds of other stuff in life.

Take my kids, for example. Yes, of course they follow Maslow's pyramid up there since they are humans. But they also have their own version. At the bottom is eating candy and playing Minecraft and at the top is thoroughly wiping their butts.

Anyway, I think you can also apply this idea to creative people. So I decided to make my own hierarchy. Even did it in pyramid form. Check it out, Ariel's Hierarchy of Creative Needs:

Version 1, okay? I'll change my mind about it eventually, I'm sure, but it makes sense to me like this right now.

Originally it was Ariel's Hierarchy of Audio Needs, but then I realized that I've known Artists and Designers and Programmers and lots of other creative people that talk about what that pyramid represents. So, I'm going broad with it! Maybe that's nervy, I don't know! Let's walk through it.

First, you gotta have the will. You have to actually want to be creative. As a creative person, it can seem strange that there are some people out there that don't want it, but they really and truly exist. There are people that have zero ambition to paint, compose, code, sculpt, write, whatever.

This, to me, is the absolute minimum creative need. Because if you stop having a will to create, then...?

Once we have the will to be creative, now we need a way to do it.

This means we have to get some tools. This could be anything from a pencil to singing lessons to a computer to a chisel. All creativity requires tools, I think. Even if the tools are brains and hands, or voices, or the ability to pop and lock. Tools!

Also, need the time to be creative. Real, actual, honest-to-goodness time in our schedules to actually do the dang thing. Without time, there's nothing. Just a bunch of tools hanging around collecting dust. We all know people like that, right? They have a bunch of tools just sitting around doing nothing?

Tools and time, well, next thing you know, you're making stuff!

Once we have the will to do something and the tools to do it, then comes the golden goose. The need that so many get stuck on. Often the perceived holy grail of all creative needs -- WORK. Getting paid to be creative.

And it really can seem like the end. The ultimate thing that we do until we die. Before you have that job doing the creative thing you love, work can seem like the end game. And a lot of people get stuck here, maybe for their entire lives. But check it out. There's defintely more.

Once we work for a while, maybe things start to get a little samey. What was once the job of our dreams is now mostly just a job. A cool job! It's a cool job, sure. But it feels more and more like a job than anything else.

This is where wonder comes in. It's that feeling that we get that fills us up with bubbles, where our eyes get wide and lightning strikes our brain with an epiphany! Where a fire lights inside us! We somehow see what we've been doing for so long in a new and wonderous way!

Or perhaps we stumble into the impossible challenge... the problem to solve that pushes us right against the edge of our abilities. We might be a little terrified, but somewhere deep down, we know we can do it, we just need to figure out how, with the right tinkering, the right head scratching...

And the wonder can sustain us for a long time, over and over. It helps us stay young and curious, and the more of it that we have, the better. It's a feeling of creative fulfillment and inspiration.

In a life filled with wonder and work, it can be easy to lose touch with the world around us. We get so wrapped up in it, and often wrapped up with others who have also achieved this wonderful existence, that we might project our fortunes onto others. And yet others might look at us and feel that we are distant... so far away... in a place they can only dream of...

So, in a life of wonder and work, our final need becomes helping others achieve creative fulfillment, just as we have achieved. It is to make the time to bring others up with us, to show them how to find the sense of wonder and purpose that we have found, and to keep the path clear so that others can follow us.

Our final need is to be wise. To solve our hardest problems with our earned experience. To build a strategy that leaves our industries or fields better than they were when we inherited them. To listen to the trials and concerns of those that haven't achieved what we have achieved, and to help guide them through.

Let's talk about it. Hit me on Twitter @arielgross.