Terminal Reality is adding networking support to its Infernal Engine -- VP Joe Kreiner explains, discussing the platform's new animation, lighting, and processing upgrades.
Christian Nutt
Contributor
March 01, 2010
Last February, game developer Terminal Reality announced that it would begin licensing its Infernal Engine, which the company used to develop last year's Ghostbusters: The Video Game. Since that time, the company has picked up 15 licensees, according to Terminal Reality VP sales and marketing Joe Kreiner, and is upgrading the technology in the engine to keep pace with the times. Today, the company is announcing that it is moving forward with its plans to bring networking support into the engine, and has hired Marius Ulsamer, formerly of Threewave Software as its new network architect. That's just the beginning, says Kreiner. "In keeping with Infernal Engine's complete solution philosophy, we'll be providing our own networking very soon. Today's AAA games require great networking, and we want to provide our licensees with a compelling feature set," he explains. "We'll have more to announce on this in a few months. Suffice it to say, we're happy to be growing the team with industry-leading talent." Terminal Reality has also made a "significant technological upgrade" to the engine's animation system adding hierarchical animation state graphs, extensible node-based GUI improvements for animation, sharable full or partial state hierarchies, partial hierarchy blending, and animation source re-targeting. Also added is multi-platform multi-threaded posing, immediate state preview while editing, custom animation events, custom user data for events and animations, and an integrated character runtime with physics, events, and posing. The lighting system has also been upgraded, adding screen space ambient occlusion, realistic global illumination of both indoor and outdoor scenes, dynamic sunlight/moonlight shadows for outdoor environments up to 25 square miles, dynamic object lighting, and the addition of per pixel motion blur. 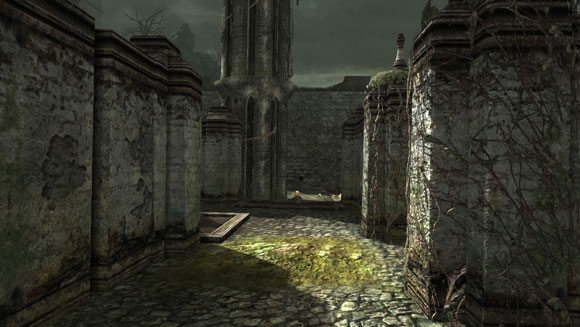 Terminal Reality Lighting Demo
The company has also put work into the engine's multithreading tech. Kreiner describes it as a "console engine, with a focus on multi-processor and multi-threading environments." To showcase this, the company has optimized for and is planning to show a demo of the engine on Intel's Core i7 980X processor at GDC during Terminal Reality's sponsored session. Kreiner says that the changes were made because "Terminal Reality's goal with the Infernal Engine is to stay at the pinnacle of rendering quality. These additions reflect that, as well as apply directly to the titles we are working on, and our licensees." Describing the licensing business for the engine as "fantastic," Kreiner points to High Voltage's upcoming shooter The Grinder, which is scheduled to ship on Xbox 360, PlayStation 3, PC, and Wii as indicative of the engine's capabilities. Wideload and Disney's Guilty Party, which was announced last week, is another Infernal game, as is Terminal Reality and 4mm's music game Def Jam Rapstar, of which Kreiner says, "Above all, that game shows the flexibility of the technology." According to Kreiner, "Terminal Reality's worked on just about every genre of game, and delivered on time and on budget. That really shows in the efficiency and flexibility of Infernal Engine."
Console
Get daily news, dev blogs, and stories from Game Developer straight to your inbox
Subscribe