Valve Index makes VR prettier, but it's the controllers that steal the show

We go hands-on with Valve's impressive new VR system, the Index, and dig into what this means for VR game developers and the future of the medium.
Kris Graft
Publisher
June 28, 2019

Virtual reality is in an awkward place right now. The gold rush of a few years ago - when a brand new generation of VR hardware spurred much hype with its holodeck-flavored promises - is over with. Virtual reality has given way to actual reality, and many have jumped ship after realizing the difficulties of building a business around such a nascent technology. Those who remain in the space are the true believers who continue to plug away working on new ideas, new applications, and new hardware for VR.

That brings us to the Valve Index, the Steam VR-based follow up that branched off of the HTC Vive line. It launches today, but is apparently backordered through September. At $1,000 for the new HMD, “knuckles” controllers, and new base stations used for tracking (not including a decent PC), the Index is a premium kit made for the high-end market (the HMD alone sells for $499). This price severely limits its reach with the masses but Valve, like other companies that continue to push VR hardware forward, is playing the long game here - the very, very, long game that they hope will eventually bring smaller, cheaper, more comfortable versions of VR hardware to a larger audience.

Let’s get this out of the way and say that the “knuckles” controllers are the best part of the whole package, and are some of the most exciting pieces of hardware to hit the VR market as of late. Game developers have already been working on making existing games compatible with the controllers’ low-latency finger tracking, and new games and applications that take advantage of the feature are on the way.

The older Oculus Touch controllers do offer some finger sensing, but it’s largely limited to pointing and thumbs-upping. Meanwhile, the Index controllers are actually worn by users, meaning you can open your entire hand, grab objects in VR, and throw them by letting them go. In Aperture Hand Lab, developed by Cloudhead Games, I actually played rock, paper, scissors with a robot. Much like the way a VR HMD needs to be experienced to appreciate it fully, you don’t really realize how much individual finger use adds to the immersion of a VR experience until you’re allowed it.

What does this mean for game design? There’s a lot of opportunity for more nuanced and more intuitive interaction. Yes, obviously flipping the bird in VR now feels incredibly natural (try it in Aperture Hand Lab), but there’s more than that. Real people and AI beings can react to your hand signals, games can afford smaller, gesture-based interactions with environments, and everything in these worlds can feel more tangible in general. At first you have to remind yourself that you can just grab objects without relying on button inputs. The knuckles expand what designers can do in terms of affordance and expectations of interaction for users.

An unexpected feature of the controllers is the analog grip. Gone are the old, awkward, clicky grip buttons on the Vive controllers - now the grip itself is the input. That means the controllers can measure the input of the strength of your squeeze. This is visualized expertly in Aperture Hand Lab, where meters on your robo-hands rise and fall with the pressure you apply.

One game that was updated for Index controller support is the excellent SuperHot from SuperHot Team. The game is great without finger-support, but you don’t realize how much nicer it feels once you’ve got it. There’s a whole lot of grabbing and throwing in that game.

In short, the Index controllers are excellent, they play an important role in making VR more comfortable and intuitive - they're an important step forward for VR interaction.

HMD and base stations

If you’ve used the HTC Vive a lot, you’ll notice the improved field of view and resolution of the Index HMD. FOV is increased by 20 degrees to 130, and the 1440x1600 resolution per eye (Vive’s was 1080x1200) noticeably reduces the “screen door” effect, and everything looks noticeably cleaner and clearer, even in games running at the same quality settings in the Vive. Notably, the HMD now has stereoscopic pass-through external cameras and built-in off-ear headphones, which are welcome additions.

The Index headset is representative of the kind of incremental changes we expect to see from new HMDs at this price range: higher resolutions, more features (like audio), better framerates (120Hz and an experimental 144Hz mode, plus 90Hz backward compatibility), and more options for eye and head comfort. 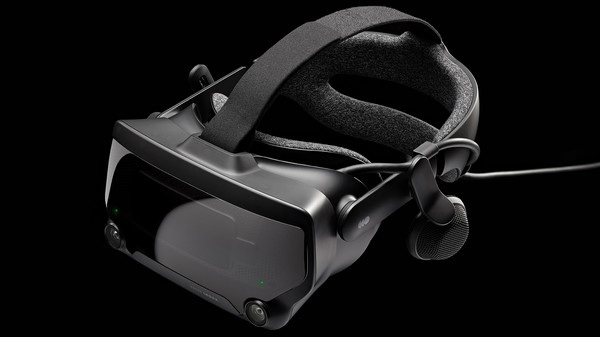 There is one weird thing on the HMD that hasn’t had much explanation yet from Valve: the front trunk (what Valve calls a “frunk”) that has a USB 3.0 connecter nestled within. The Index’s website only says, “Lovingly referred to as the Frunk, the front compartment includes a USB 3 Type-A port - specifically made for tinkerers and makers. Specs and details will be provided soon.” Who knows what this might support in the future.

Worth noting is that, especially if you already have a Vive setup, Index setup is fairly easy. If your 1.0 base stations are mounted, it’s just a matter of unscrewing those from their mounts and replacing them with the 2.0 base stations. The HMD’s wiring and connectors are also a tad more simplified as Valve inches in the direction of accessibility.

The new base stations also win at the numbers game, with Valve saying that two can support a “400 percent larger play space,” over the original base stations, thanks to a wider FOV and longer range. Four of these combined can facilitate a 10x10 meter space, or about 32x32 feet. Most people won’t be taking advantage of this (1.0 base stations were already excellent), but perhaps for larger VR installations we could see some creative applications.

In all, it’s about welcome and, expectedly, incremental improvements. Of course, to the people making this stuff, it probably doesn’t feel so “incremental,” but to the market, wider FOV, higher resolution, and faster framerates are not enough to expand beyond the early adopter, core market for VR. But doing that isn’t exactly the point with the Index.

The Index isn’t going to expand the market. A lot of people buying the Index will be people who are looking to upgrade their current PC VR HMDs. Expanding the market is the biggest challenge that VR as a whole is facing, but that’s not the purpose of the Index. Valve’s latest HMD is meant to foreshadeow the smaller, more accessible, cheaper versions of VR hardware that are destined for the future. It represents an effort toward higher-fidelity everything – better spatial tracking, better visuals, better audio, better hand interactions.

I go back and forth with my expectations for VR. On one hand, I feel like the fact that VR requires users to block out all of their real-life surroundings is a fundamental problem that will keep it from gaining true widespread acceptance, no matter how accessible the form factor or how great the hardware. On the other hand, maybe that’s what will help VR earns its place in the mainstream – its ability to absolutely replace reality. And maybe VR can exist wherein it doesn't have to be "mainstream" in order to sustain a healthy amount of businesses.

Regardless of the future of VR or its viability in the market, the fact is that the Index – and its wonderful controllers – is the best piece of kit currently available in this awkward, weird, exciting stage of new-age VR development.

Register now for XRDC 2019, the premier AR/VR/MR event for devs!