SEARCH
A minimum of 3 characters are required to be typed in the search bar in order to perform a search.
Programming
10 min read
article

The complete guide to Unity & Git

Over 69% of the software industry is using Git, and recent improvements to handling of large assets (through Git LFS) have made it more practical to adopt for game dev. This article will teach you how to track and build Unity projects with Git & Git LFS.
Tim Pettersen
Blogger
December 06, 2016

Git is a free and open source version control system that makes it easy to track changes to your Unity projects and collaborate with developers, artists, designers, and other contributors on the same code base. It is used by over 69% of the software industry, and recent improvements to Git's handling of large assets is causing a growing number of gaming studios to migrate away from Perforce and Subversion to Git. This article will teach you how to version Unity projects with Git, track large assets such as textures and audio efficiently with Git LFS, and host and build your code with a free Bitbucket and Unity Cloud Build account.

Unity – and scripting IDEs like MonoDevelop, Consulo, Rider, and Visual Studio – create temporary files, build assets, log files, and other generated project files that are not suitable for checking into version control. Tracking these files with Git bloats the size of your repository, and may cause horrific conflicts when multiple developers are working on the same project. You can teach Git to ignore these files by checking a special .gitignore file into your project directory:

Based on Unity .gitignore rules generated from gitignore.io, with a few additions.

It's also worth adding .gitignore rules for special files maintained by your operating system, if you haven't already.

Unity has a couple of settings, Version Control Mode and Asset Serialization Mode, that force scenes, prefabs, and meta files to be written to disk in a more Git-friendly format: 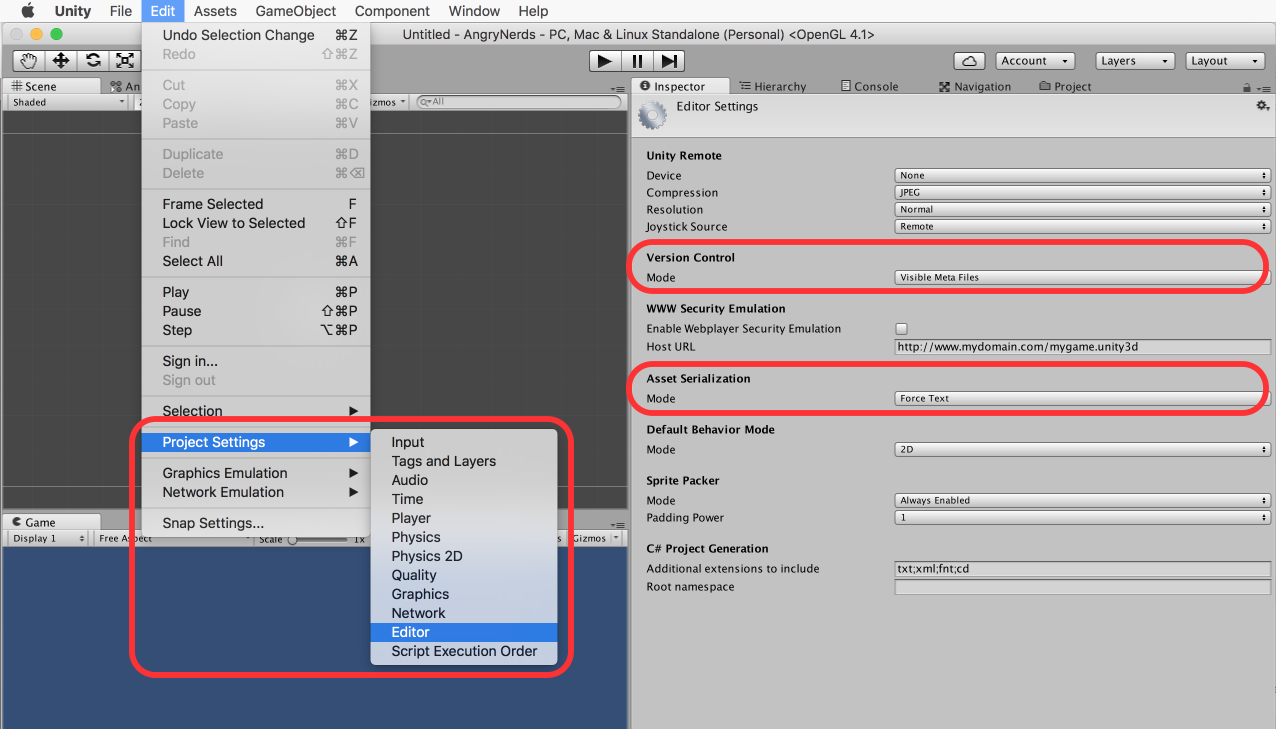 This causes Unity to write asset .meta files as normal, non-hidden files in your Assets directory.

Once you've enabled these settings you should save your project, and commit the changes to your repository. Your settings will be saved in ProjectSettings/EditorBuildSettings.asset and distributed as part of your repository, so other developers on your team won't need to make the same changes.

Git is a distributed version control system, which means the entire history of your repository (that is, every version of every asset) is copied from the server during the clone process. This is problematic if you want to version large game assets such as spritesheets, high-resolution textures, complex models, or audio and video files alongside your source code. One 10MB spritesheet may not seem like a big deal when you first commit it, but every time you modify it another 10MB is added to your repository, which means an additional 10MB for everyone to download.

Git LFS is an extension that breaks the "distributed" nature of Git by only downloading certain large files when you actually want to work with them. By default, Git LFS only downloads the latest version of each large asset from the server when you initially clone a repository. When you switch branches, pull new changes, or checkout an earlier commit, any required assets are fetched automatically from the server.

Once you've installed Git LFS, you typically use the git lfs track command to teach Git which file patterns to track with LFS. This adds new LFS filter bindings definitions to your .gitattributes file, which should be committed and distributed as part of your repository. You can add your own definitions - a good rule of thumb is that any binary file over ~500KB should be tracked with LFS - or you can create a file named .gitattributes in the root of your repository and copy this pre-made set of definitions into it:

Based on Unity .gitattributes rules defined by nemotoo, with a few additions.

Note that you can also define patterns based on wildcards or directory names – e.g. git lfs track "Assets/Textures" – but this isn't a great idea as it will cause your text-based .meta files to be tracked with Git LFS as well.

Once you've set your Asset Serialization mode to Force Text, Git may be able to automatically merge some changes made by different developers to .scene and .prefab files. But don't despair if you're still seeing merge conflicts: Unity ships with a Git-compatible merge tool named SmartMerge.

To enable SmartMerge, you'll need to add the following snippet to your Git config. For just one repository, add it to the .git/config file in the top-level directory of your repository. To enable SmartMerge for all repositories on your system, you'll need to add it to your global Git configuration. Locations vary, it's usually ~/.gitconfig on MacOS and Linux, but you can simply run git config --global -e to open it in your system editor.

On Windows, replace '/Applications/Unity/Unity.app/Contents/Tools/UnityYAMLMerge' with:

or wherever you've installed Unity.

A quick explanation of these properties:

Next time you encounter a conflict that Git can't automatically resolve, run:

And SmartMerge will (hopefully) resolve it for you. For example:

Note, Git sometimes thinks that a file is unchanged when in fact the conflicts have been resolved successfully. To test, try opening the conflicted file in Unity. If it really is unchanged and there are still conflict markers, it will fail to open. If it opens successfully, you can check the result of the merge in the Unity Inspector (it should have the new values from both sides of the merge) and then commit it as normal.

If you have large assets in your version control history, they will be converted to Git alongside your other project files and stored directly in your repository. As discussed in the section on handling large assets above, this may result in a huge repository that will take quite a bit of time to clone, push, and pull. To keep your repository lean, you should rewrite your history to use Git LFS to track these large assets. If you're migrating from Perforce, Git LFS support is actually built into the git p4 command. If you're migrating from SVN (or any other version control system), you'll typically want to migrate your history to Git LFS after the initial migration to Git using a tool like git-lfs-migrate.

Hosting and building your Unity project

Git is distributed so you'll always have the complete history of your project locally, but you'll still need a centralized host to backup your repository and collaborate with others. Bitbucket offers unlimited private repositories, support for Git LFS (including a free storage tier), and is free for up to five users, making it ideal for many indie game studios. Though AAAs like Ubisoft and SEGA use Bitbucket as game development software too.

You can sign up for Bitbucket for free, or for a complete walkthrough on setting up your first Unity project on Bitbucket, you can follow the official Unity3D tutorial on getting started with Bitbucket and SourceTree.

Another advantage of hosting your game on Bitbucket is that you can easily integrate Unity Cloud Build with your project. Unity Cloud Build is a free service that monitors your Bitbucket repository for changes, automatically creates game builds for your target platform(s) when new changes are pushed, and emails you a link to download your packaged game. 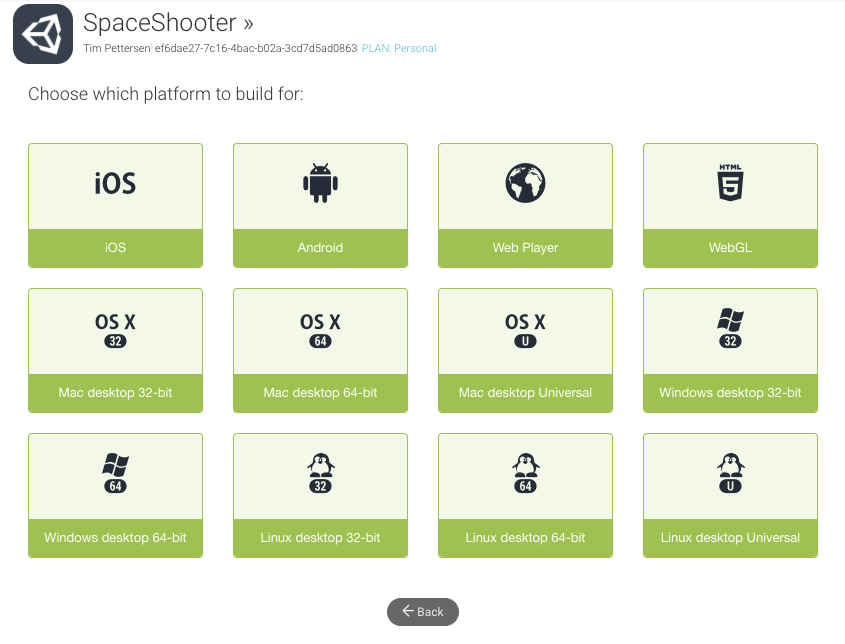 This makes sharing new versions of games with non-technical users really easy, as they no longer have to pull and build the changes themselves. Also, if you're working on games for mobile devices, you can simply install them directly from Unity Cloud Build, rather than uploading APKs to your own cloud storage or messing around with Xcode.

To get going with Unity Cloud Build and Bitbucket, follow the official Unity3d.com tutorial: Your first Cloud Build Project.

Or if you're feeling adventurous, dive straight in and enable Unity Cloud Build for your project – it's pretty straight forward. Just enter your Bitbucket repository URL (e.g. https://bitbucket.org/tpettersen/spaceshooter) as the Server URL when setting up your first build target, and copy and paste the generated Unity Cloud Build SSH key to your Bitbucket account when prompted. If you're planning on using Git LFS you'll need to add the generated key as a general purpose SSH key, as deployment keys do not yet support Git LFS. Otherwise, for vanilla Git, you can add it as a deployment key specific to your game repository.

I hope you've found this guide useful for getting started with Git and Unity! If you have any questions or tips on Git and Unity, drop me a line on Twitter - I'm @kannonboy.

Thanks very much to Git LFS contributor Steve Streeting and Unity Evangelist John Sietsma for their help preparing this article!