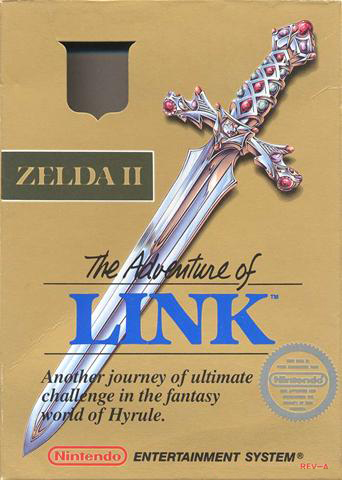 Zelda II - The Adventure of Link by Nintendo for the NES, released in Japan in 1987 and a year later in North America. A legendary game! 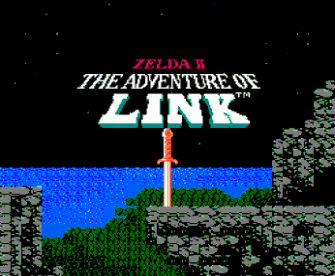 Here we have the first sequel to one of Nintendo's best-loved series of games which has lasted several generations. This title was a radical departure from the style of play introduced in its predecessor, which is widely regarded as a superior product; for that reason, it has its share of detractors, but personally I loved experiencing this game after it originally released. 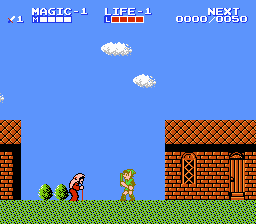 I would have loved this game no matter what it ended up playing like; following completion of the two quests in the first Zelda, I was starving for more, and the wait for the sequel seemed like an eternity. To aggravate things, Nintendo slowly teased occasional pictures and info on this game during development, and blamed "chip shortages" for a protracted delay of its release. It was a horrible wait, I needed this game!

Zelda II was obviously a strong resemblance to the first, but with many departures. There were experience levels and magic points now; there were side-scrolling battle sequences, and side-scrolling caves and dungeons as well (top-down map navigation was still utilized, but you no longer fought in this view). Also, you could pass through towns and talk to non-player characters, get items/spells from them, and be assigned "side quests."

A little luster of the first game's style was lost, though Zelda II had a few nice graphical moments - but a lot of it (environments) looked very simple and blocky, though this was not unusual in many NES games of the time. The character graphics were something else though - a lot of the creatures you fought were very nicely rendered! 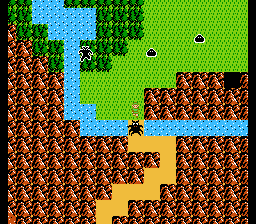 Gameplay-wise, the game started out fairly challenging and required a lot of attention to detail on the player's part, and a lot of dedication and expoloration. Much of the game was not too difficult to figure out, though I did get stumped a couple of times (I think you needed to high-jump onto a town roof and enter into the chimney in order to learn the upward thrust technique, something like that - I could never figure that one out!) 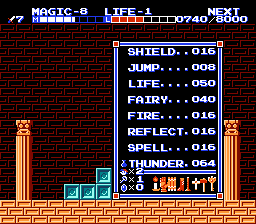 Overall, Zelda II was a lot of fun; though a marked departure from the original, it was still quite an enjoyable adventure in its own right, even if you were angry at it for not being "exactly what you were expecting." It still holds up as a fun game today that looks and sounds decent, and is worth investigating if you are curious.