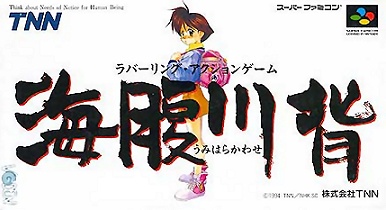 Umihara Kawase by TNN and NHK, originally released for the Super Famicom (SNES) in Japan only, in 1994.

Most people reading this are probably thinking "umi-what-kara-who'sis?" A few of you might know this game though, it's an obscure little title that has made the rounds in certain nichier of the nerd-circles..

The game puts you in the loose socks of some Japanese schoolgirl stranded in some bad drug trip.. everything looks funky and checkered, and giant sealife are hell-bent on ending you. Meanwhile, perilous drops are everywhere and falling to your doom is not difficult. 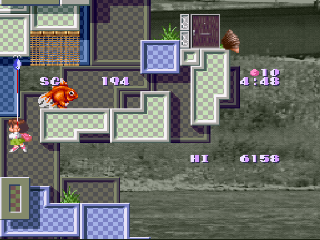 Fortunately, your dad was the Bionic Commando and you have a fishing pole-type device which can be swung around, attached to things, and used to pull yourself all over the place. Sound a little unusual? It sure is.. 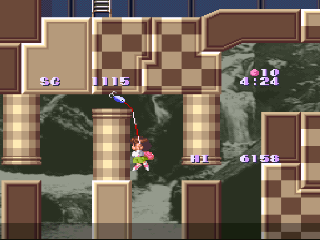 The game is actually pretty cool, it's uniqueness makes it stand out and therefore it can be quite fun. Not sure about some of the stuff in this game (it starts out fairly confusing and frustrating) but stick with it and you just may dig it! It's managed to maintain relevance over the years (a decent version showed up on PS1, and recently a.. not very decent port to PSP).

Want to try to win an iPad, Xbox 360, or PS3? Think you are a decent puzzle gamer? Let's see what you are made of.. Click here to learn about a contest for our new iPhone game 180.