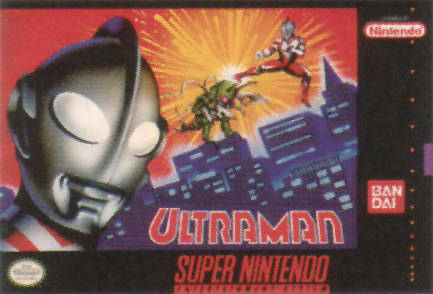 Ultraman: Towards the Future by Bandai, for Super Nintendo. Released in 1991.

Well.. who remembers this game? Anyone? Anyone? (crickets chirping). I thought not. Ultraman's never made a terribly succesful splash as a franchise in the West, to begin with (as opposed to his brother Godzilla). Yeah there's good few fans out there, but the average casual nerd will be pretty hard-pressed to actually note any information about Ultraman other than that "he's um.. silver.. and red... and.. he fights... monsters. Right?"

Poor unloved Ultraman. For some reason, the marketing boys decided to suit him up and give him a go during the prestigious launch period following the SNES' Western Debut. This showed up on store shelves alongside the likes of Actraiser and Super Ghouls 'n Ghosts. Judging by the fact that history has absolutely forgotten this game, you can suppose what kind of quality it was. Still,it showed up in those pages of Nintendo Power and EGM on the short list, so you know I was going to at least have rented it..

Ultraman disappointed. The claim to fame was some nice demonstration of Mode 7 technology (where game sprites could be scaled and rotated "like in the arcades"), otherwise this was a marginal effort at best (Bandai hadn't put out any spectacular software, really... ever.) This was released prior to the whole SF2 revolution. so it is not fair to compare it to what that all wrought - with that in mind, what you had here was a 1-on-1 fighting game where there was only a single playable character, and only a 1-player experience, with a very limited move set (jumps, punches, and kicks, plus some nifty-looking "finishing moves"). Obviously they weren't trying to move the earth with this game, but what is presented is a very accessible and straightforward action game built upon a somewhat-recognizable brand (even if it was decidedly niche).

Unfortunately, the game never attempted to be any more than that. Given that one knows anything about the actual setup of Ultraman (towering superhero who does battle with likewise giant invaders from space, mutants, et cetera) even a gamer with a substandard imagination can see some potential in this premise. A half-hearted developer could have certainly taken this and run with it. Even now I would say a modern game built around the Ultraman concept could be extremely cool. Look at those shots up above! Giant silver guy with Spider-Man eyes blasting lasers and punching the tar out of unspeakably evil menaces! I am tired of Killzone and Unreal. I want a game like this! Calling Treasure! 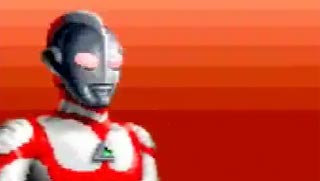 Sadly, Ultra came and went with a whimper. Is this game horrible? It's not godawful. It's playable, but you'll get tired of it about 3 minutes into picking it up. It's worth looking at just to acknowledge the time period - and for it's day, a rushed 1st-gen SNES game with next to no love layed into it, it's not a complete waste. Chalk this one up for collectors only. But make me a real Ultraman game - somebody!