Retro Game of the Day! The Ninja Warriors (SNES) 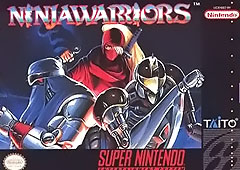 The Ninja Warriors for SNES by Taito, 1994 release, developed by Natsume. Because the yin to farming roleplaying games is the yang of Ninja Cyborg Assassin games. 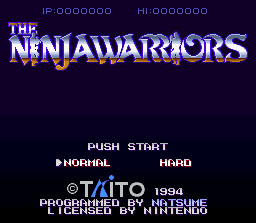 Ninja Warriors is a bit of an interesting story - the original arcade featured 3 contiguous monitors, much like Taito's other arcade setup for the original Darius. This gave you a long horizontal expanse of a playfield - it looked and felt strange, but by virtue of that it felt cool and different. Just like a kid with a big playground! And of course, something that couldn't be properly replicated at home. 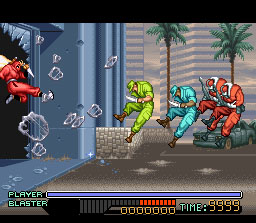 We never saw a domestic release of the original Ninja Warriors in the States, so when a console-only sequel was developed, they just used the first game's name (besides, "The Ninja Warriors Again" sounds strange, for a number of reasons!) At any rate, the game got a graphical upgrade thanks to the SNES' beefier processor, though of course the 3-screen setup was not a possibility.

The game involved your choice of 3 different cyborg ninjas - agile and weaker, lumbering and more durable, and of course the in-between "average" character. The gimmick here was that as your on-screen character took damage, you'd slowly see visual damage progressively shown on your character Terminator-style (especially in the case of the blonde female ninja, who unlike the other two did not have a prominent mechanical exoskeleton visible.)

As for the game itself, it was a very standard formula. Walk to the right, attack enemies, dodge projectiles. Charge up a super-attack, maul bosses, and so on and so forth. Very similar to a game like Bad Dudes, where movement is restricted to the horizontal plane with the occasional platforms to provide some vertical play. In a beat-em-up world dominated by the likes of Final Fight, TMNT and X-Men, where gameplay would take place in pseudo-orthographic space (with vertical play as well as horizontal), this felt extremely limiting and therefore not as enjoyable.

Still, the game sticks out to me because - it was gorgeous! I was always a sucker for games with these themes - military and cybernetics. When they did it right in 16-Bit, it looked incredible. Though this game was fairly light on substance, at the time that I rented it I was in love with it's aesthetic. Overall a forgettable experience, but even now it's fun to look at and play through for some mindless button-mashing and soldier-slashing.